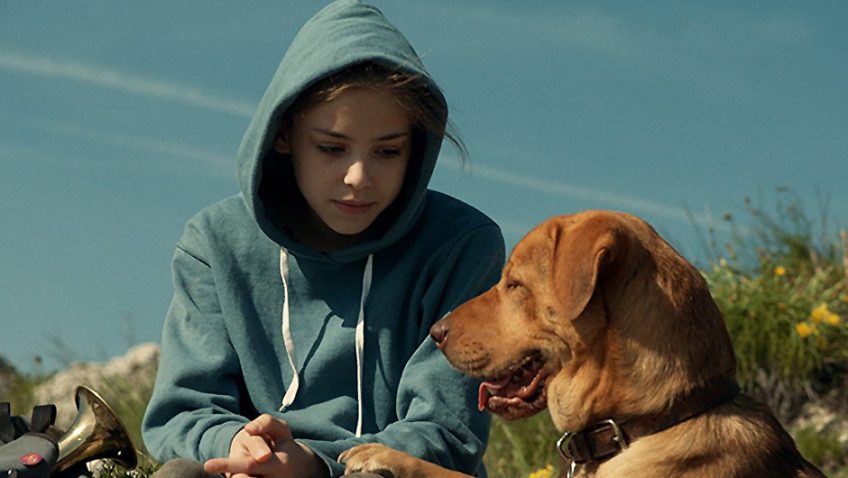 Experimental Hungarian filmmaker Kornél Mundruczó has bounced back from a disastrous reception at Cannes to his 2010 film, Tender Son – The Frankenstein Project, with White God

(Fehér isten), now released in the UK. It not only won the prestigious Un Certain Regard Award at the 2014 Cannes Film Festival, but the dogs in the film won The Palm Dog Award, a special award recognising what has to be the best animal wrangling of the Millennium. White God

is the best film with ‘dog’ in the title since Alejandro González Iñárritu’s equally metaphorical masterpiece, Amores Perros fifteen years ago.

Mundruczó’s most mainstream and accessible film to date, White God

is a powerful, if blunt, cautionary parable about fascism, racism and nature vs. nurture. It is also a tribute to the seemingly powerless, marginalised, or persecuted minorities in any society who take a stand. This is not the Hungarian Uprising of 1956 against Communist oppressors, but with the growth of the far right in Hungary, viewers are allowed to speculate on historical parallels. On the surface, however, White God

is the age-old story of a boy and his dog – only here, it’s a girl, Lili (a terrific performance from the charismatic young actress, Zsófia Psotta) who, significantly, plays the trumpet.

While echoes abound, from Lassie Come Home and Oliver Twist to Animal Farm and any number of revenge films – Moby Dick being the most obvious – White God

offers viewers a new experience and agenda, with, from the thrilling prologue to the dramatic conclusion, operatic set pieces and Marcell Rév’s stunning cinematography. The visceral scenes of animal cruelty might repel the sensitive and the squeamish, but honestly, no animals were harmed in the making of the film.

In order to regulate dog breeding, the government has introduced a tax on ‘mongrels’, causing owners to dump their mix breed animals on the streets, or in overcrowded shelters. The shelters are putting thousands of animals to sleep while unscrupulous gamblers pick up the fittest as cheap fodder for back-alley dog fights.

Lili is a 13-year-old student and musician who lives with her mother and beloved mongrel Hagen (Bodie and Luke). Although she is a loner, LIli plays in the school orchestra and her life is subjected to the discipline of her music teacher (László Gálffi), You can read all you want into his approach to music, and to Lili’s, for the power of music plays a major role in the film, right down to Asher Goldschmidt’s beautiful score.

But Lili’s life is to become a lot worse when her mother goes off for the summer, dumping Lili in the oppressively hot Budapest apartment of her morose father (Sándor Zsótér) whom she has not seen in many years. As long as Hagen is with her, Lili can bear anything, but when her father forces her to betray her canine best friend, the relationships between father and daughter and Lili and Hagen change.

Mundruczó opens the film with a kind of prophetic dream sequence that is so visually and emotionally arresting that you wonder how he is going to sustain the impact. Just wait and see, and watch the trumpet, for it is clearly there for a symbolic purpose. Lili takes her power from her musical instrument and from the dogs who follow her like children followed the Pied Piper of Hamelin.

For nearly two-thirds of the film Hagen and Lili are apart, and we follow their dual trajectories over the summer as they both, in their own ways, revolt over the cruelty of their authoritarian masters: for Lili her father and music teacher, for Hagen, a series of inhumane dog catchers and low-life handlers.

The more alienated the dogs become from humans, the wilder they become, gaining an alarming momentum that appears unstoppable. Everything depends upon whether the bond between Lili and Hagen, is stronger than the call of the wild, or the hunger for revenge – and liberation. Here the realism of the early scenes turns into a kind of fantasy, but a very gritty one.

While Hagen befriends a white dog in the story, he is undoubtedly the star, and he is brown, which makes the title a puzzle. The title might refer to a 1982 film by Samuel Fuller based on a novel by Romain Gary (who had committed suicide in 1980) entitled White Dog. The film is as blunt a parable as is Mundruczó’s, but it is focused narrowly on white/black American race relations, asking the question whether humans are inherently racist or whether they can be ‘trained’. Fuller’s film was plagued by production problems (for one thing, it was originally to be directed by Roman Polanski, just before he fled the country on rape charges) and it was shelved, along with its controversial, possibly inflammatory anti-racist message, after an unpublicised, week-long, limited release. Fuller was so disgusted with the decision to shelve the film that he moved to France, never making an American film again.