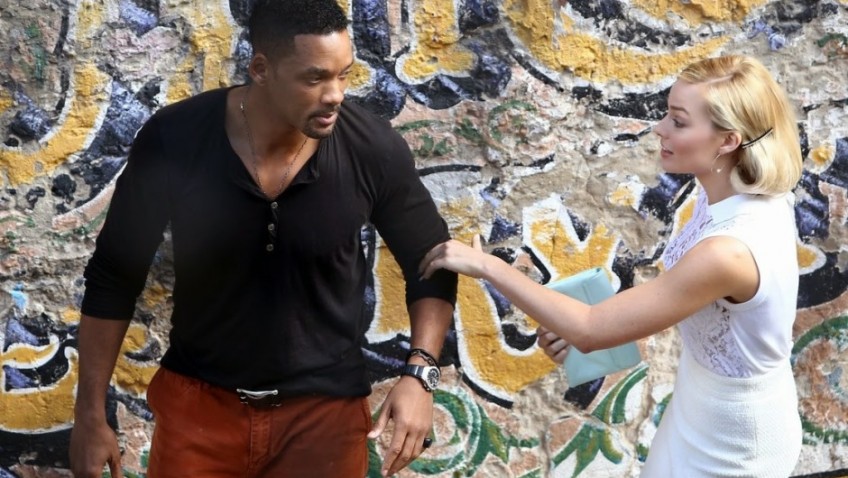 A film so sexist and overly slick that it’s greasy

Will Smith (I am Legend, Men in Black) is worth a bundle and he has earned it as legitimately as any popular Hollywood actor. When he appears at premieres or on talk shows he walks like a man who is worth a bundle, too.

So does Nicky Spurgeon (Smith): an impeccably dressed con artist, thief and skilled gambler in Focus, a film so sexist and overly slick that it’s greasy.

As Spurgeon and his team travel from New York to New Orleans and, in a different, reduced configuration, on to Buenos Aires, Spurgeon himself deals with the big ticket cons. He displays acting skills that rival Smith’s, playing a reckless gambling addict to ensnare a cocky billionaire.

For the smaller thefts, he is a sort of modern day Fagin, or ‘receiver of stolen goods,’ training younger men and scantily dressed women in the fine art of pick pocketing.

One such woman is Jess Barnett (Margot Robbie from The Wolf of Wall Street), a lower-level con artist. Pretending to be a call girl in an expensive hotel bar, Jess tries one on Spurgeon who exposes her poorly executed and well known con when Jess’s male accomplice appears in the hotel room right on cue.

Jess and her accomplice are left with egg on their faces, but Jess wipes it off and decides to become Spurgeon’s apprentice. If you can’t beat ‘em, join ‘em.

The idea is that Jess is smitten with Spurgeon, who has charisma, charm, expertise, and cool to spare; and Spurgeon finds himself returning the favour, though you would never know it.

In New Orleans, he stands on a balcony like a pimp watching his prostitute walk the streets below in a short, skin tight, flimsy summer dress. ‘When you look like that,’ he tells her, ‘no one looks at your hands.’

She duly struts her stuff from one drooling man to another coming away with watches, wallets and cash.

When Jess completes her training Spurgeon and his team are delighted for her: she has graduated from being a hustler playing a prostitute, to becoming a high-class thief who looks like one. We are meant to think that Jess is a strong, liberated female character, but there’s little that isn’t sexist about the role or the movie.

Spurgeon’s rule is that women serve a purpose but to be in top form, you have to be single. When Jess gets too close for comfort, he goes his own way, leaving her in tears. As coincidence would have it, they bump into one another some time later in Buenos Aires where Spurgeon is working on his most elaborate con yet.

While Spurgeon is gaining the trust of dashing Spanish race car team owner, Rafael Garriga (Rodrigo Santoro), he notices with alarm (and some jealousy) that Jess has already got there before him.

Jess is no longer an apprentice, but a competitor and the stakes are high. Although the plot is so silly you would think authenticity was not an issue, Writer/Directors Glen Ficarra and John Requa’s (Crazy, Stupid, Love) hired the services of Apollo Robbins, known as ‘The Gentleman Thief,’ to teach Smith and Robbie sleight-of-hand. Presumably, if the film work ever dries up, Smith will have something to fall back on.

The romantic comedy about con artists that will take a lot to beat is American Hustle and Focus does not even come close. Skip it and treat yourself to the genuinely funny, and far classier, American Hustle.