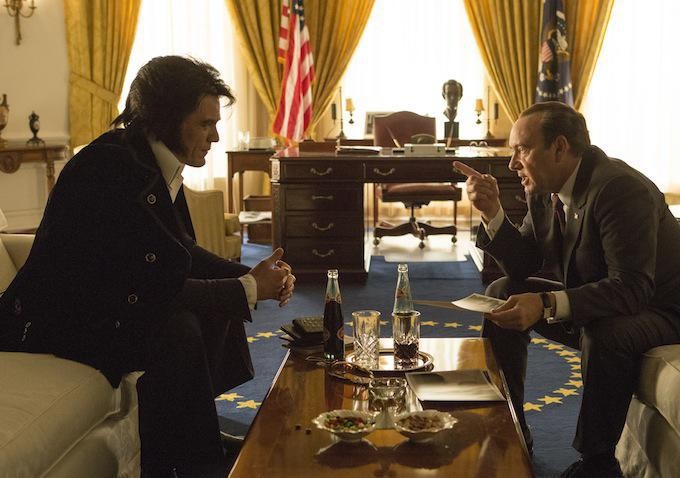 The surreal story is a hidden gem from American history

At President Obama’s last Annual Correspondents’ Dinner, entertainment celebrities like Will Smith, Morgan Freeman, Jeff Goldblum and Mark Ruffalo mingled with models and singers, including the Soul Queen, Aretha Franklin. The value of a selfie with George Clooney is easily understood, but it wasn’t always the case.

When, at a routine staff briefing in 1970 the 37th president of the USA, Richard Nixon, was told he had a meeting with Elvis Presley that afternoon, he growled, ‘Who the hell set this up?’  This surreal meeting is the subject of an uneven, but largely entertaining comic drama with top notch performances from Michael Shannon (Elvis Presley) and Kevin Spacey (Richard Nixon). Elvis Presley (Shannon) was 35, with seven more years to live when he wrote to Richard Nixon. In his letter he expressed his desire to become an FBI agent at large in Edgar J Hoover’s campaign against the corrupting hippie drug culture threatening the youth of the day.

At the time, Presley was at the height of his fame, playing to sold out audiences from Las Vegas to Houston where he went on stage armed with a Derringer in his boot and a .45 pistol in response to a ransom threat.  He was also, rather ironically, in the early stages of his ultimately fatal addiction to prescription drugs, and was watching his seven year marriage to Priscilla break down.

Not one to waste time, on the morning of December 21, 1970, Presley pulls up at the White House in a limousine, accompanied by musician/band manager Jerry Schilling (Alex Pettyfer), who at the time was working as a film editor in Hollywood, and bodyguard Sonny West (Johnny Knoxville).   The reaction of the security guards alone is worth the price of admission.

Liza Johnson’s zippy, if underwhelming film, written by Joey and Hanala Sagal and actor Cary Elwes, tells two parallel stories before they converge in the central imagined meeting between the two kings of 1970 America. The first story is that of Elvis’s preparations for the meeting and his long, humiliating wait to be seen.  There are laughs to be sure, but less successful are glimpses of a lonely, lost King falling from his throne. ‘When you walk into a room, Jerry,’ Elvis tells his loyal friend Schilling, everyone sees Jerry.  When I walk into a room everyone remembers their first kiss…and I don’t even if I know who he is anymore. But you do, Jerry, you know this boy from Memphis.’

This speech might be heartfelt, but it’s a ploy to keep Schilling in Washington D.C.  An unnecessarily prolonged and distracting subplot, tells the story of Schilling’s torn allegiance between childhood friend Elvis, and his impending rendezvous in L.A. with his fiancée Charlotte’s (Sky Ferreira in a cameo) parents.  The point in all this is to tell us at the end that the ever-generous Elvis gave the newlyweds a ranch house where they still live today.

The second, often hilarious parallel story is the campaign on behalf of Nixon’s staff to persuade first Chief of Staff HR Haldeman (Tate Donovan) and then Nixon that the publicity value of the meeting would bolster his image. ‘Everybody loves Elvis,’ they point out, with the implicit understanding that the same could not be said for Nixon. Johnson plays up the surreal nature of the encounter as the competitive Nixon and Presley play a hilarious game of one upsmanship.  Bud Krogh (Colin Hanks), the White House liaison to the Federal Bureau of Investigation, explains the protocol to Presley and warns Presley not to touch the President’s Dr Pepper or M & M’s and, of course, Presley makes a point of helping himself.  When Nixon brags about the piece of moon rock that Buz Aldrin brought back for him on Apollo 11, Presley nonchalantly mentions that he has one, too.

With only five days of shooting, Spacey’s admirably nuanced portrayal of Nixon fills the movie, and is distinguished from his turn in the political series House of Cards.  He turns the odious President into a man you start to feel sorry for.  He’s the doting father out of touch with American youth who agrees to the meeting primarily to please his daughter, Julie.  Elvis plays Nixon’s insecurities in what is in fact, a negotiation.

The result is a photo of the two men standing by the flag, and autographed photo for Julie in exchange for a real FBI badge and undercover agent title.  As Presley points out to Nixon that the two share much common ground, you can see Nixon delighting in the prospect, but not entirely convinced.  When Presley equates the Beatles with the communist infiltrators corrupting American youth, and accuses them of being ‘un-American’, even Nixon looks a bit uncomfortable. Lisa Johnson’s film sails along (it’s just shy of 90 minutes), going for laughs and adding some nice touches.  When White House security carry out what they expect to be a routine security search, Elvis, Jeff and Sonny unload their arsenal of guns in front of the speechless men. At the airport, Shannon, so obviously an Elvis impersonator himself, is approached by two others (including co-writer Joey Sagal) and Shannon’s Elvis applauds an impromptu performance.

While it would be unfair to say that no one could ruin this terrific story (a surprising amount of which is true), you can’t help but feel that Johnson, or someone else, could have made even more of it.  In some respects, the film is similar to the Michael Douglas/Matt Damon two-hander Behind the Candelabra, but that film, telling a story that had less going for it on the surface, had much more resonance and depth.

Elvis and Nixon is one of a growing number of films aimed at the older 50s crowd, but not obviously so. Still, not many cinema-goers in any under 50 will even know who Richard Nixon is, let alone Hoover; Narcotics and Dangerous Drugs Bureau head John Findlator (Tracy Letts, superb); Chief of Staff HR Haldeman; or Egil ‘Bud’ Krogh and Dwight Chapin (Evan Peters), both of whom were soon to be indicted in the break–in of the National Democratic Party Headquarters, known as the Watergate scandal.