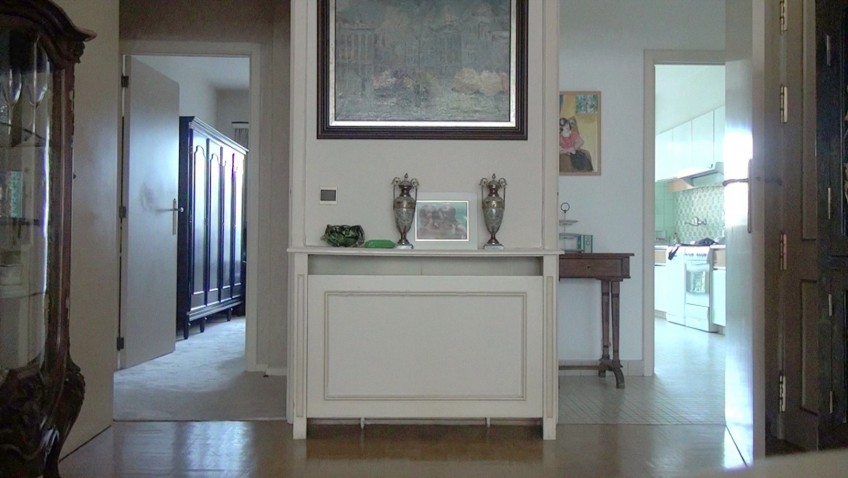 Chantal Akerman’s final film is, fittingly, a final tribute to her mother

The pioneering Belgium filmmaker Chantal Akerman committed suicide in October 2015 at the age of 65, a year-and-a-half after the death of her 86-year-old mother, Natalia.  Natalia, an Auschwitz survivor, died shortly after the filming of Akerman’s final film, No Home Movie, in which she is the reluctant star. In the film, Natalia protests, ‘I don’t like being photographed’ and ‘I don’t want anyone to hear what I have to say to you’.  But whether Natalia realised it or not, she has been the star of much of her daughter’s oeuvre, including Akerman’s first film, the 1968 short, Saute Ma Ville and her very long 1975 masterpiece, Jeanne Dielman, 23 quai du Commerce, 1080 Bruxelles.

The title is apt. While the film is shot like a home movie with a mobile phone and low resolution digital video camera in Natalia’s comfortable bourgeois apartment in Brussels, what is captured are not fond happy memories of laughing children and beach barbeques.  The only scene in which Akerman reminisces with her mother on camera, they discuss Chantal’s fear of food as a child and the Nazi occupation of Belgium.

Moreover, in some scenes, which are often unflattering of Natalia, grainy and blurry or shot at contrejour, Natalia, the model of the housebound housewife of ‘Jeanne Dielman’, appears on Skype communicating with her contrastingly peripatetic daughter.

There is little humour in this film and little of it is what you would call, entertaining. Working with her regular editor, Claire Atherton, there are long static shots of the apartment, sometimes without Natalia, as though to suggest that Natalia’s identity is so bound up with the home that the two stand in for one another. Perhaps for a Polish immigrant whose family moved to Belgium believing they would be safe; and for a Holocaust survivor whose own parents died in the camps, a safe family and a comfortable home with a well-stocked kitchen is enough.  Natalia refuses to complain about the obligation to keep Kosher before the days of dish washers. ‘It was normal’, she shrugs, ‘I went along with it’.

The film opens, not with an interior, but with an extended sequence panning across a desert landscape (could this be Israel) that will infuriate even the most the patient.  The film ends with Natalia closing the curtains in her bedroom, a literal curtain call, followed by a long static shot of her hallway, from which a corner of the all-important kitchen is visible.  Though, typical of Akerman, the film offers no context for a series of boring, inconsequential actions of an old woman coughing, walking and eating, those who know any of Akerman’s films will see in it a swan’s song full of references to much of her previous work. While the film is a tribute to her mother, it is also a study of Akerman’s complex relationship with her mother.

Natalia encouraged her daughter to forge a career before marrying, and so determined was Akerman to do so after seeing Jean-Luc Godard’s Pierrot Le Fou, that she dropped out of film school to finance and shoot her first short, Saute Ma Ville. Describing the film as ‘the mirror image’ of her later, great work, Jeanne Dielman, Akerman films herself alone in her kitchen rebelling against the domestic chores she mimics  in the manner of her inspiration, Charlie Chaplin.

Akerman’s 1977 film News from Home is a documentary in which the sound is intentionally out of sync with the images, suggesting a life out of sync with other women’s lives.  We hear Akerman read in a voice-over the letters she sent to her mother during her residency in New York from 1971-73.

Upon her return from New York, Akerman made what is considered her masterpiece, Jeanne Dielman, 23 quai du Commerce, 1080 Bruxelles, a three-and-a-half hour film in which single-mother Jeanne (Delphine Seyrig), performs a series of domestic rituals, including peeling potatoes in her kitchen, day after day.  She supports her son by prostitution, and this is shot as though it were a part of a woman’s household chores.

Jeanne Dielman is not the only explicitly feminist work.  If a woman is the slave or prisoner to her household work, she is also a slave to her husband or partner.  In Captive (based loosely on Marcel Proust, The Prisoner), a controlling and jealous man kicks his girlfriend out of his apartment when he suspects her of having an affair with another woman.  Although he takes back his girlfriend, when they stop on the road for dinner, she slips away and he assumes she has drowned herself.

It is no coincidence that in two of the three scenes in which Akerman is with her mother, they are in the kitchen and in the first, they are eating potatoes. ‘Very good’, the mother comments, while Akerman jokes that she has picked up some domestic skills in her life.  In the other, much longer scene, which provides the film only narrative, Akerman is clearly trying to get her mother to talk about her experiences in the War.

Relatives are mentioned whom we do not know and the conversation is often too intimate to follow and yet Akerman is directing, leading the conversation like a prompt.  Natalia never mentions her time in Auschwitz, but her description of the gradual encroachment of the Germans is chilling.  She describes how at the beginning they were friendly and polite, and then ‘little by little, like perverts – terrible! They got us! When her mother says, ‘if we had known from the start…’ Akerman finishes, ‘you would have gone to American or South America…’

If much of Akerman’s work is a rebellion against the enslavement of women either through  male relationships or household drudgery, so was her life.  Akerman’s partners were not men; she had no children and spent little time in the kitchen outside of filming. In Les Rendezvous d’Anna, a female filmmaker travels from city to city promoting her latest film, sleeps with men in nondescript hotel rooms and returns home to listen to her answer machine.

‘I’ll be there on September 20th for Yom Kippur,’ we hear Akerman say on Skype. The call cheers up her mother, while their loving prolonged telephone farewells mask the difficulty of communication when they are together.  In one scene Natalia complains to her other daughter, ‘Chantal never tells me anything.’  The sister is surprised and retorts, ‘She never stops talking!’  Natalia qualifies her remark. ‘But she never tells me anything important.’

While Akerman is always trying to get her mother to ‘tell [me] a story’, one senses that Akerman’s stories to her mother are her films.  No Home Movie is Akerman’s most personal.  Her mother might, like the audience, complain that she is not saying anything important.  Akerman might disagree.