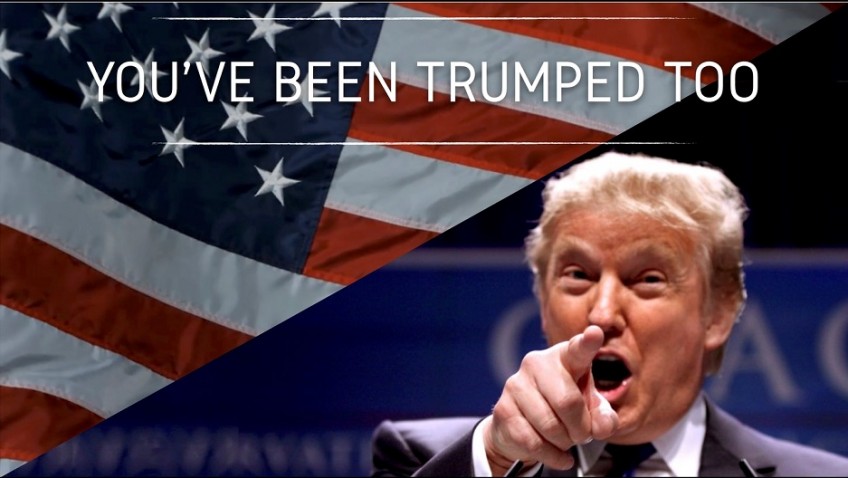 Joyce Glasser reviews You’ve been Trumped, Too! is released on demand on iTunes, Amazon, GooglePlay, Journeyman VOD and Vimeo from 18th August.

You’ve been Trumped, Too! was originally reviewed on Mature Times on November 4, 2016, but political pressure from the Trump campaign meant only a limited cinema release.  In time for the upcoming election, Anthony Baxter’s re-released documentary proves equally timely.  It opens with the voice of Donald Trump, wailing: ‘To be lied about, to be slandered, to be smeared so publicly before your family is painful.’ Audiences might be thinking that he took those words right out of Hillary Clinton’s mouth after Trump publicly declared her to be ‘corrupt’ and a ‘criminal who ought to be in jail’ when there had been no investigation or charges brought against her.  We see, later on in the film, how hypocrite is not the only adjective that will come to mind in considering the then President elect and his family.

In 2011 when Baxter made the documentary You’ve Been Trumped, no one in the world could have imagined that the businessman who bulldozed the beautiful sand dunes in Balmedie Aberdeenshire to build his golf course would be running for President of the USA. That film introduced us to an elderly Scottish woman, Molly Forbes, who moved to her modest bungalow called Paradise to escape Aberdeen’s drug dealers.  But it does not feel like Paradise anymore because her new neighbour is a force that no one, it seems, especially the police, can control.

The Forbes’s water supply was cut off when construction of a road to the golf course broke the pipe that carried water from a spring on Trump’s new property to the Forbes’s farm.

We hear Andy Wightman, a member of the Scottish Parliament confirm that Trump has a duty in law to repair the pipe. ‘The trouble with Mr Trump is that he seems to have no respect, not only for …his neighbours, but he has no respect for the legal framework.’  Mr Wightman, who is still a Member of Parliament, knows what he is talking about having written two books about property in Scotland: Who Owns Scotland and The Poor Had No Lawyers.

When we first meet 92-year-old Molly and her son Michael three years on, they are still either without water or, on good days have contaminated water, despite the public assurances from Paul O’Connor of Trump International that they would be providing Michael with ‘the best system he’s ever had.’  Molly warns us, ‘Never trust Trump.’ Trump managed to buy out most of the small homesteads around the beach, but the Forbes and a few others held firm and were subject to a campaign of intimidation.  After questioning Trump’s claim to bring jobs to the area (local resident Susan Monroe guesstimates 20-30 jobs in total), we hear from Suzanne Kelly who wrote an article about the conflict of interest in the Aberdeen press that welcomes Trump’s golf course.  She revealed that the editor of one paper was engaged to Trump’s local spokesperson.

Kelly started a petition to ban Trump from the UK for hate crime and half a million people signed, but soon Trump was back.  Meanwhile, a local social worker, Rohan Beyts, organised a march against Trump and was arrested in the middle of the night (all charges have since been dropped). Trump’s role model Vladimir Putin has clearly given him some lessons in curbing peaceful protest.

For a moment in the film, we think we are going to get a new, exclusive interview with Trump when he tells Baxter that since his documentary (You’ve Been Trumped) aired on BBC, ‘you’ve become a more important person in terms of doing an interview.’  Trump is not exactly reliable, however, and Baxter is not only shut out, but also arrested with his producer for asking about the Forbes’s water supply.

To take advantage of the Republican Convention in Cincinnati, Baxter offers Michael and Sheila Forbes a trip to Ohio to hear  for themselves from Trump supporters. This is, perhaps, the most frightening part of the film, but before that, there are moments that make your hair stand on end. Two such scenes involve the Trump children.

As Molly longs to take a shower or heat the house, Donald Trump calls Michael a pig and his farm a ‘pig sty,’ while his daughter, Ivana, speaks of her father’s ‘kindness and compassion.’ As Molly talks about her work as a Land Girl during WWII where she milked cows, producing record yields with love and tenderness, we see Donald Trump Jr shooting a helpless elephant at point blank range and posing with its tail. Justifying hunting, he declares, ‘if it doesn’t have any value – like elephants in Africa – they end up destroying people’s crops.’  Over the end credits, we learn that Donald Jr has expressed interest in a cabinet position managing America’s national parks and federal land. He would make them ‘more productive’ and ‘have more hunting,’ and we see a photo of Donald Jr proudly standing beside a dying leopard.

While the Trumps are in America, Michael Forbes digs up the road to repair the pipe himself.  Almost immediately he receives a litigious letter on Trump International’s gold embossed letterhead.

Baxter’s documentary suffers from a lack of exclusive interviews and a stronger focus. He briefly mentions the Flint, USA water contamination scandal and an elderly widow in Atlanta City threatened by a car park for Trump’s casino, but we want a stronger case that Molly Forbes is only one of many victims. Still, as a portrait of a potential First Family (yes, we get Melania Trump’s plagiarised speech juxtaposed with Michelle Obama’s original) it is an effective modern day horror story.