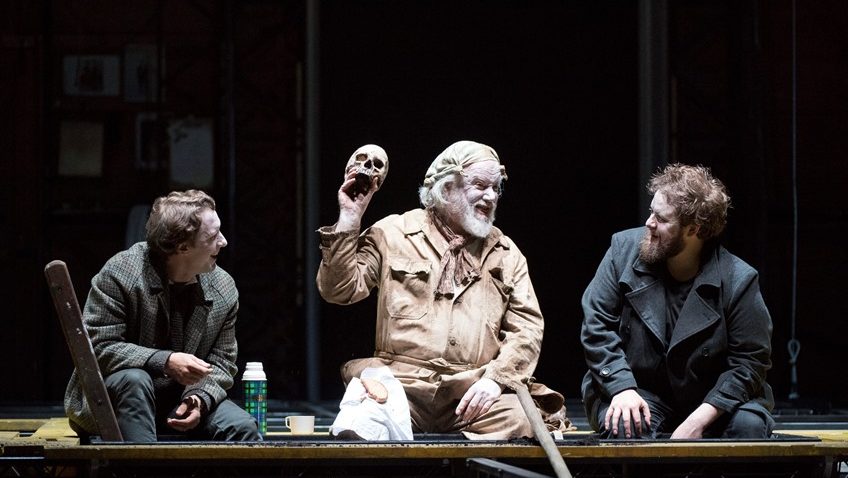 Brett Dean and his librettist Matthew Jocelyn turned Hamlet into an opera. Vladimir Jurkowski conducted The London Philharmonic Orchestra. Neil Armfield’s production, which he also designed, has a clean modern look. The opera premiered at Glyndebourne in 2017.

If you are wondering how “To be or not to be” is sung”, forget it. Hamlet drops the “To be?” and says only “Not to be?” It feels oddly incomplete

The libretto always feels like quotes. It never feels like dialogue. The most deliberately comic use of Shakespeare is when the Players start spouting single famous lines, one after another, as in a game.

Hamlet is presented as a tormented soul, a burly, scruffy, bearded graduate who has spent most of his time at Wittenberg University on the rugby field rather than in his studies. Allan Clayton is very agile and liable to stand on tables and roll about on the floor.

Angels and ministers of grace, defend us, Dean’s score, contorted, distorted, acoustic, electronic, aided by the disturbing choral sounds off-stage, captures not only Hamlet’s deeply troubled mind but everybody else’s troubled mind. All the characters are a bit mad.

Ophelia (Barbara Hannigan) is seen to be neurotic from her very first entrance. When she describes Hamlet’s condition, a noble mind overthrown, she is in fact describing her own “sweet bells jangled out of tune and harsh.” When we finally get to the mad scene Shakespeare wrote for her, it is turned into a big show-stopping number.

Rosencrantz and Guildenstern are not taken seriously and behave as if they are in an operetta. This camp-comic couple would never have been Hamlet’s mates at uni. Hamlet ties their shoelaces together so that they have to hobble off-stage. It’s so unfunny. They do not die in England. They take on Osric’s role and die with everybody else on stage

Rod Gilfry (young enough to be his brother’s son and never going anywhere without a crown on his head) has the most dramatic soliloquy, a failed prayer. Gertrude (Sarah Connolly), most surprisingly, is not given the big mother-to-son duet she emotionally deserves. She’s not even given a bed; but, incongruously, she is given the curtain to the interval all to herself, as if she were the lead role.

When it comes to Hamlet, the play remains the thing. Dean’s opera adds nothing and it is never tragic. Only Neil Armfield’s handling of the final duel and the mass killings actually excite.