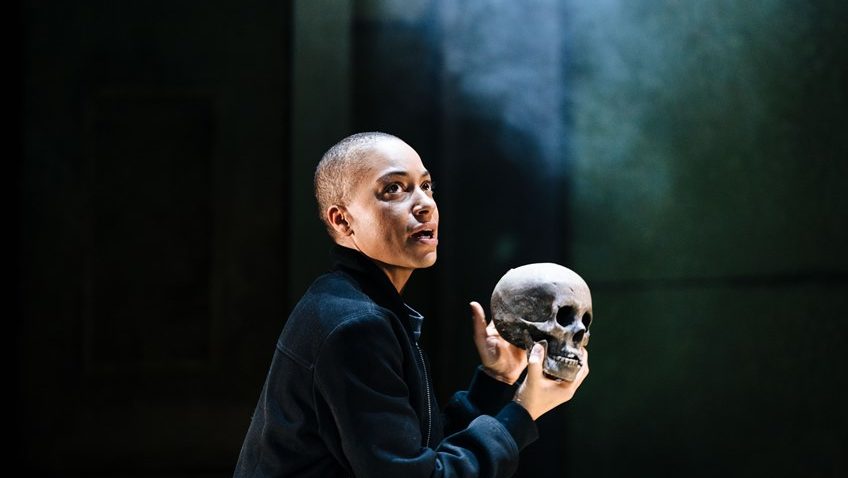 Hamlet at the Young Vic is of historic interest in that Cush Jumbo is the first woman of colour in the UK to play the Prince of Denmark.

Women want to play Hamlet. There is nothing new in that. Women have been playing Hamlet since the 17th century and that includes such famous actresses as Charlotte Cushman, Sarah Bernhardt and Asta Neilsen.

The text in Greg Hersov’s modern-dress pedestrian production is much cut. Casting and acting are poor. Nobody seems right for their role. I never for one moment felt I was in Elsinore Castle. The boring set has no atmosphere.

I never felt Adrian Dunbar and Tara Fitzgerald were Claudius and Gertrude. Dunbar is a stilted business executive. Fitzgerald is not helped by the clothes she wears.

Cush Jumbo is totally acceptable as a male Hamlet; but she is never the noble figure, Ophelia describes: “Th’expectancy and rose of the fair state; that unmatched form and feature of blown youth.” Shaven-headed, she is more bloke, more bovver boy, than sweet prince. Jumbo is at her best when Hamlet is hysterical and behaving madly.

There’s no Fortinbras. The Ghost, underlit, has no visual or verbal impact. Rosencrantz and Guildenstern, with their selfies, look and behave as if they are hippy students at a cheap polytechnic rather than Wittenberg. Osric has lost his comic character completely.

Joseph Marcell’s Polonius is a foolish prating knave and nothing more. It is Norah Lopez Holding, as the mad Ophelia, who has the most affecting moment when she lays a hoodie on the ground and puts flowers on it.