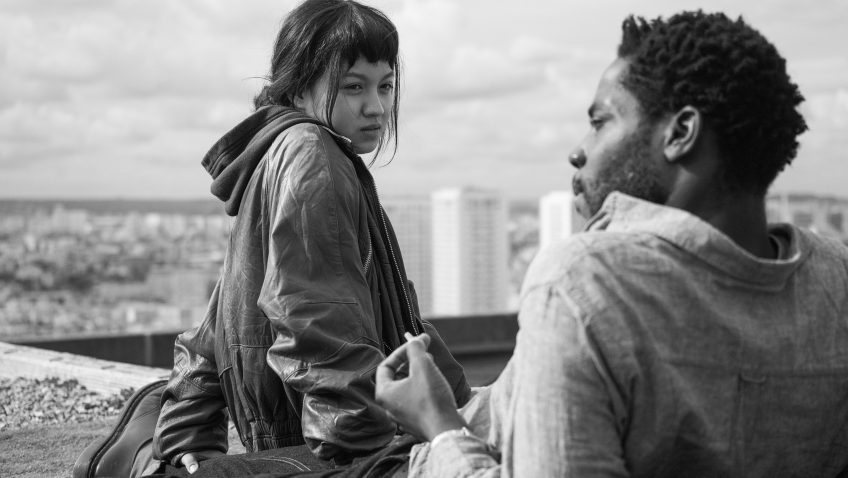 Jacques Audiard’s new film is entertaining, but gets lost in its amorphic ambition.

After The Sisters Brothers, Audiard’s misguided adaptation of a terrific book and English-language, American revisionist western, arguably France’s most renowned director today, Jacques Audiard (A Prophet, The Beat that My Heart Skipped), returns not just to France, but to a high-density, trendy Parisian neighbourhood. Perhaps Audiard’s most ambitious film to date, he attempts to capture how late 20 and early 30-somethings live, work and, especially, love now. If life, work and love seem to merge into a film about immediate sexual gratification, followed by the residual despondency of sexual relations, Audiard claims that his film has something of a moral tale to it.

Based on the American comic book collection by Adrian Tomine, Les Olympiades: Paris 13 is also inspired by Eric Rohmer’s seminal “New Wave” film, My Night at Maud’s, another film in which characters (as here, primarily two women and a man attracted to them) do a lot of talking. It is the third in Rohmer’s series of Six Moral Tales and Audiard gives himself the challenge of updating that revered film. But if the quality and subject matter of the conversations is much different in Maud’s so is the manifestation of desire and love, which is conspicuously left to the imagination and all the sexier for it.

Les Olympiades is a neighbourhood of tower blocks within the 13th arrondisement or borough, that were built following the 1968 Paris Olympic Games, so that each tower is named after a city that hosted the games. Not surprisingly in a cosmopolitan area with an international outlook, Audiard’s main characters are a cross section of society today.

Emilie (Lucie Zhang) is a caustic, impulsive, brash and extroverted French woman of Taiwanese heritage who is allegedly brilliant, but living rent free in her grandmother’s apartment, gravitates to low paid, unrewarding jobs that she struggles to keep. Only late in the film do we learn that Emilie has been neglecting her visits to her generous grandmother who is dying of Dementia in a care home.

Emile is about to be sacked from her latest job at a call centre for her lack of people skills, and so, girdled in Saran wrap to lose weight, she interviews roommates to give her an unearned income. Enter Camille (Makita Samba) a self-confident high school teacher who is quitting his job to focus on his doctoral thesis.

Although Emilie claims she wanted a female roommate, it is Camille’s body and charm that gets him the room. You could think of the title, (in English) The Olympiads, as referring to their sexual acrobatics as well as to the neighbourhood. Although at first the two spend the night in one room, the relationship ends when Camille decides on a separate room policy, and invites another attractive woman (black, like himself), home. If Emilie has confused sex with love Camille has a decidedly cold and pragmatic attitude to sex. When Emile sets new rules about bringing in guests, Camille moves in with his new lover, leaving Camille without income.

Like Emilie, Camille has family in Paris and his relationship with them is just as revealing as in Emilie’s case. Camille pays a rare visit to his father (Pol White) and his much younger, teenage sister Eponine (Camille Léon-Fucien) who is overweight and stutters, suggesting issues of confidence. His father praises Eponine’s foray into stand-up comedy, expecting Camille’s encouragement. Instead, Camille launches into a tirade about how he hates stand-up comedy, causing Eponine to leave the room in tears.

The structure of interweaving stories, continues with Nora (Noémie Merlant) who, of all the lost souls, is the most sympathetic. She has recently arrived in the big city to escape an abusive relationship with a relative with whom she worked as an estate agent in a provincial town.

Her life as a mature student is difficult enough until she shows up at party in a blond wig and is mistaken for an online sex-chat star, Amber Sweet (Jehnny Beth). Bullied and harassed (by the surprisingly puerile, conservative students), Nora drops out of school and finds a job as an estate agent, where her skills are in direct contrast to those of a new colleague, Camille, there to pick up extra money while working on his thesis. While he is a novice, Nora finds herself succumbing to the advances of this charming, handsome teacher after seeing him relate to a former student.

It is a moot point who tires of whom first, but while Nora becomes disillusioned with Camille, she becomes increasingly comforted by her online conversations with the real Amber Sweet. Nora had contacted Amber as a way of dealing with this seemingly catastrophic case of mistaken identity, but choices prove serendipitous.

Perhaps as a throw back to My Night at Maud’s, Audiard shoots the film in monochrome, although there is no apparent benefit to that decision. It does, however, highlight the differences in skin tone when the naked bodies are in action, drawing our attention (in an overly emphatic manner), not only to Paris as a mixed-race melting pot, but, in Nora’s story of same sex attraction, to the diversity of modern sexual desire.

None of this feels new or profound and our lack of sympathy for any of the characters, with the exception of Nora, makes it hard to care about them. While Emilie in particular appears to be punishing herself in her self-destructive way of life, and Camille seems pathologically unstable, we never get beneath the surface or feel they have understood themselves or others. The explicit sexual and nude scenes might attract young audiences, but it feels as superficial as the characters who, with, again, the exception of Nora, remain lost souls to the end.

In My Night at Maud’s the older characters might be lost souls too, but interestingly, they all have stable vocations (doctor, engineer, biology student) and career paths and the income and independence to live alone. Employment and housing might have been a fixed variable in 1969 but one of the most flexible variables fifty years on. This state of flux comes across brilliantly in Audiard’s film, which, to that extent, succeeds in updating Rohmer’s far more satisfying film about love.