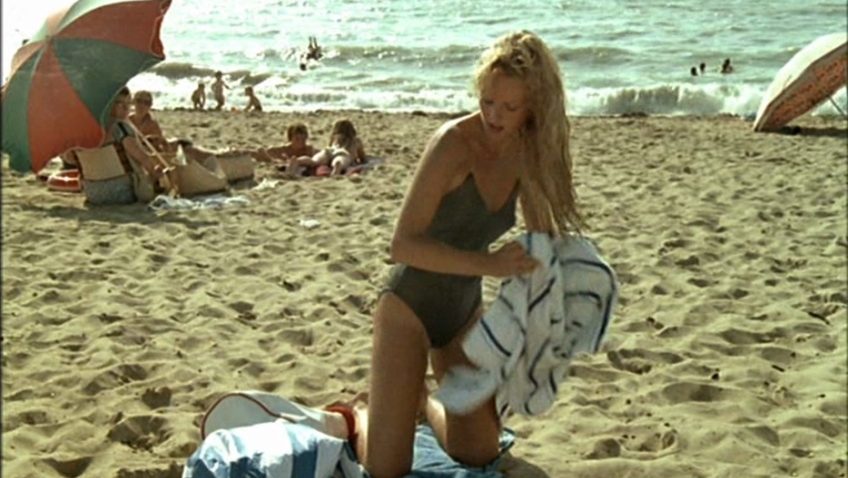 French New Wave auteur Eric Rohmer’s Comedies and Proverbs series from 1972 to 1987 are just what we need, isolated as we are in the depths of winter. MUBI is offering its viewers the chance to see, or reconnect with these delightful and exquisitely human films, each based around a moralising proverb.

Rohmer’s films are all about sensual and intellectual social interaction, and a lot of that takes place in beautiful summer holiday destinations (usually on France’s west coast) that will make viewers nostalgic for their own summer holidays. Here, scantily clad men and women air their philosophies on life and love and become prisoners of their imaginative obsessions in a talky, confessional style that surely influenced a young Woody Allen.

Pauline at the Beach

Pauline (Amanda Langlet) is 14 and delighted to be spending the end of summer with her stunning, twenty-something cousin Marion (Arielle Dombasle) at their family’s holiday home near Granville in Brittany. Pauline complains that holidays with her parents, are cramping her style. Marion, who is already divorced and thinking of men, interrogates Pauline and learns she has never been in love.

Rohmer wastes no time in alerting us that Marion might not be the best chaperone for Pauline, or that he had studied philosophy at university. In candid conversations the characters air their feelings and philosophies of love, fidelity, romance and sex, not all of which prove consistent with their actions as the story evolves.

In a case of life imitating art, Dombasle, an actress/model/singer, married a lawyer, who, like her lover Henri in the film, was 32 years her senior. She remarried the public intellectual Bernard-Henri Lévy, (known as BHL) one of the leaders of the French New Philosophers movement of 1976.

The proverb behind Pauline at the Beach is from Chrétien de Troyes: “Qui trop parole, il se mesfait” (“A wagging tongue bites itself”). Pauline observes the duplicitous, delusional and self-serving adult world around her and becomes entrapped in it but seems to come out with her moral compass intact.

Rohmer wanted Bridgette Bardot in the role of Marion, but Dombasle does very nicely in the head turning department. She is on the beach with her statuesque, perfect body and long mane of Bardotesque blond hair for about three minutes before an old boyfriend, besotted Pierre (Pascal Greggory) and an older acquaintance of Pierre, businessman Henri (Féodor Atkine) compete for her attention in front of a marginalised Pauline.

It is no contest. Marion’s first husband convinced her she was in love, when she was in love with the idea of love, not the man. Pierre, who keeps repeating that they are made for one another, is trying to do the same. He has put Marion on a pedestal which is a turn-off with no challenge. Henri is a serial womaniser, without a romantic bone is his body, but he is not about to turn down a gorgeous, young woman who deludes herself into believing she is the seductress calling the shots.

Into the mix comes Louisette (Rosette) a “loose” girl who sells peanuts on the beach and Sylvain (Simon de La Brosse), a boy Pauline’s age, whose sexual advances initially worry Pauline. They are both in Henri’s house one day when Pierre walks by and sees a naked Louisette in Henri’s bedroom window, but who is with her? Pierre leaves Pauline and Marion to ponder in their own ways who has cheated on whom.

The beautiful cinematography is by Néstor Almendros, who won an Academy Award for Terrence Malick’s Days of Heaven, and was nominated for Kramer vs Kramer, Blue Lagoon and Sophie’s Choice. But Almendros began his career with the French New Wave directors, making some five movies with Rohmer (including Claire’s Knee and My Night at Maud’s) before Hollywood beckoned.

Far from the sunny coast, in Full Moon in Paris a 20-something interior-design trainee, Louise (Pascale Ogier) works in Paris but commutes to and from a dead, tower-block suburb, where she lives with her loyal, devoted boyfriend Remi (Tchéky Karyo). Ogier, who is in every scene, is given a film credit for the film’s décor a task she performed to get her into character. The film’s (invented) proverb is: “The one who has two wives loses his soul, the one who has two houses loses his mind.”

Louise is torn between the domestic security she enjoys with Remi and her attraction to the independence and nightlight of Paris. Remi dislikes the Parisian scene with the noisy parties, nightclubs and small talk, but tolerates Louise returning late at night and waking him up because he loves her.

One day, Louise announces that, to avoid disturbing Remi she will be spending two nights a week at her studio flat in central Paris which she has been renting out. She convinces a dubious Remi that testing their love will make it stronger.

There is little opportunity to test it. Louise finds that her social life in Paris is restricted to a garrulous creep named Octave (Fabrice Luchini) who acts as her escort on the town. Octave, who is married with a kid, pressures her for a sexual relationship, but Louise rationalises that possibility out of existence. When Louise suggests that Remi goes out with a mutual acquaintance, just to make sure that is love for Louise is not just familiarity, she never imagines that anything will come of it.

Both Tchéky Karyo (La Femme Nikita, Saving Grace, The Patriot and television series, The Missing and Baptise) and Fabrice Luchini (On Guard, Bicycling with Molière, In the House) have gone on to be international stars in film and television. There is a hint of Ogier’s (her mother is the French movie star Bulle Ogier) fate in the film whether conscious or not. Louise is painfully thin. She drinks black coffee and, unusual for a French film, we see her dance, but never eat.

In the year of the film’s release, 1984, and shortly after winning the Volpi Cup for Best Actress at the 41st Venice International Film Festival for her role in it, Pascale dropped dead of a heart attack – explained by a childhood heart murmur and drugs. She was 25 due to celebrate her 26th birthday the following day.