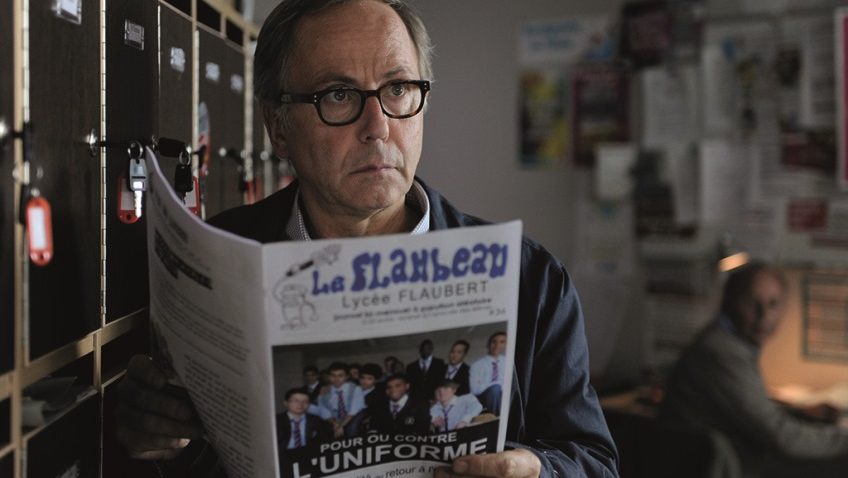 One of France’s most exportable auteurs, Francois Ozon (Potiche, 5 X 2, 8 Women) is also one of its most versatile and unpredictable. That being said, Ozon’s latest, and best film to date, In the House (Dans la Maison), a tense comic-drama about a cynical high school English teacher’s relationship with a mysterious, talented student, does not come out of the blue. Three of Ozon’s previous films, Angel, Under the Sand and Swimming Pool are also about writers and/or university literature teachers; and in all of these films, the lines between fiction and reality begin to blur.

Brilliantly played by veteran actor Fabrice Luchini, Germain is a failed writer and disillusioned French teacher at Lycée Gustave Flaubert. For those familiar with Flaubert’s writing (think of A Sentimental Education and A Simple Heart), the film begins working on various levels from the start, asking us to think about applying “realist” labels to works of fiction.

In a hilarious early scene, a delightfully cynical Germain shares the agony of his essay-correcting task with his wife, Jeanne (Kristin Scott Thomas), the unfulfilled manager of a struggling art gallery. “Saturday. I watched TV and ate a pizza. Sunday, I was tired and did nothing” is about as good as the students’ essays get.

Then he begins reading an intriguing and grammatically perfect essay by Claude (Ernst Umhauer), the shy boy who sits in the back row. Here it is worth mentioning that the film is adapted from the play The Boy in the Last Row by Juan Mayorga.

The essay, describing Claude’s plan to infiltrate the home of his schoolmate Rapha (Bastien Ughetto) under the pretext of tutoring him in maths, ends with the words, “to be continued.” Germain and Jeanne awkwardly find themselves longing for more as readers of Charles Dickens did in a pre-box-set age.

Struck by Claude’s talent and energised by the opportunity to renew his love of writing vicariously, Germain becomes an aggressively enthusiastic mentor. The theme of class, so prominent in French cinema and literature, is introduced as Claude, who claims to live in a modest flat with his single father, an invalid, longs to experience life in the house of a happy, normal bourgeois family.

But Claude is not merely a disenfranchised prodigy, and the son Germain never had; he is also a manipulative charmer. Neither Jeanne nor Germain realise, as they gather eagerly to read and discuss Claude’s latest instalments, that their marriage, based on routine and careers that have dead-ended, is falling apart.

Despite all the literary references (Henry James’ collection of essays, The House of Fiction, is directly relevant to Claude’s voyeuristic approach to story telling), In the House is Ozon’s love letter to cinema and to the art of story telling that lies behind it.

The camera is complicit with Claude’s first person, present tense narration, showing Claude in Rapha’s house. We believe what Claude describes because it is what the camera shows us. But does he really listen in on family arguments and seduce Rapha’s beautiful mother (Ozon regular, Emmanuelle Seigner) or is he just imaging it?

Moreover, it is not dialogue, but the roving camera that shows us, by a name plate on the door, that Germain is also his surname. Strangely, though, it is a book cover, casually and partially exposed late in the film, that informs the quick-eyed viewer that Germain’s first name seems to be Claude.

After a while we begin to lose our ability to differentiate between Claude’s imagination and reality. But, of course, what is this “reality,” but François Ozon’s imagination? The technique of merging the fiction of cinema with the story the film is telling is nothing new. One need not go back to Robbe-Grillet’s 1966 film, The Trans-Europe-Express for examples. Stranger than Fiction: in which an auditor discovers he is a character in some author’s narration: Ruby Sparks: about a lonely “blocked” novelist who brings a female character to life; and Spike Jonze’s mind-boggling Adaptation are more recent examples. But In the House might just be the most enjoyable and skilfully made film about the cinematic imagination to date, a film that rewards with a multilayered richness.

In his film-within-a-film, Trans-Europe-Express, writer/director Alain Robbe-Grillet pops up as himself in scenes with his main character (Jean-Louis Trintignant) just as Woody Allen has done more recently. Here, it is Germain who eventually steps into Claude’s story when it goes too far, intentionally breaking cinema’s fourth wall. Whether he is stepping in as Claude’s teacher/editor/critic; as a father figure, or as a writer longing to participate, we do not know. But this foreshadows Germain’s “actual” loss of his hold on reality.

While the film’s subtly blended literary and cinematic references are numerous (the art gallery scene with Jeanne and Germain might remind you of that in Vertigo), the most striking appears in the splendid ending. Here, Claude and Germain replace Grace Kelly and James Stewart as the voyeurs staring through the windows of a block of flats opposite as in Alfred Hitchcock’s Rear Window, imaging the lives and conversations of their inhabitants.

Whether this is a tragic or a happy ending, it is theirs.