Home / LIFESTYLE / REVIEWS > / FILM REVIEWS / A wealthy French art collector wants to die in a film so entertaining and rich and densely layered, you will want to see it twice. 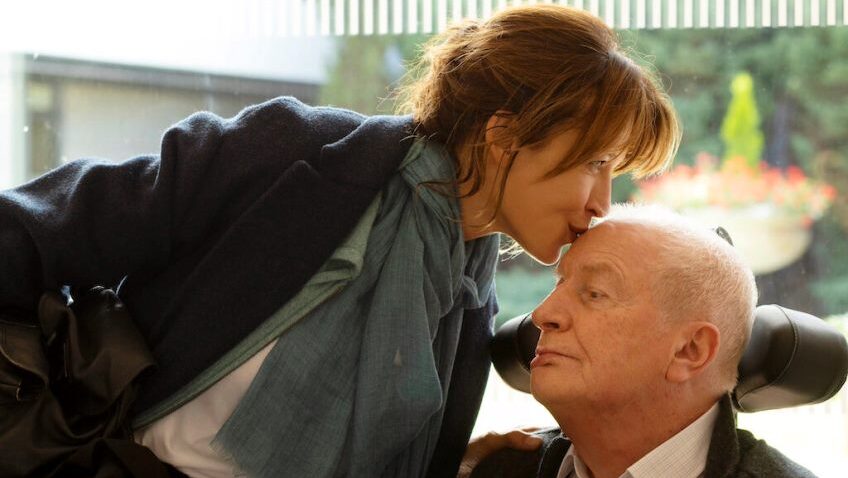 A wealthy French art collector wants to die in a film so entertaining and rich and densely layered, you will want to see it twice.

In our May review of Vortex Gaspar Noé, 58, took on the subject of a couple wishing to remain in their own home despite Alzheimer’s (hers) and heart problems (his). This month it’s the turn of Noé’s compatriot and contemporary, François Ozon, 54, to look at older parents and tackle the subject of assisted dying. It’s almost certainly an age thing, but both French filmmakers, now at the top of their game, show it can be done cinematically, and without sentimentality let alone pathos.

Any film school teaching a book-to-film adaptation class should include Ozon’s script (with Philippe Piazzo) for Everything Went Fine, a faithful, but in some ways unrecognisable, adaptation of his late co-writer Emmanuèle Bernheim’s (5 X 2, Swimming Pool) autobiographical novel. Ozon’s insightful direction, his tweaks to the dialogue, his expanded roles for minor characters, his wit, and his perfect casting give this slight book the weight of a rich, dense and important epic.

Author Emmanuèle (Sophie Marceau, La Baum, The World is Not Enough), who is married with no children, and her sister Pascale (Géraldine Pailhas, 5 X 2) who is married with two children, rush to the hospital at the news that their father, André Bernheim ( André Dussollier, Tell No One, Private Fears in Public Places) is gravely ill after a stroke. André’s estranged sculptress wife, Claude (Charlotte Rampling), has Parkinson’s and suffers from depression. Her later visit to the bedside is short.

In the first half of the film we follow, in painstaking detail, the lives-in-limbo of André’s two dutiful daughters-turned-carers. They cater to the wishes and whims of their difficult father through his hospital ups and downs until he is discharged from intensive care. As Emmanuèle later explains to the police by way of mitigation, ‘No one can refuse my father anything.’ Thanks to Dussollier’s great performance and make-up – he is 76 and looks his screen age, 88 – we experience his strategy of charming, moaning, goading, bullying and then withdrawing to get his way.

Through non-intrusive flashbacks we see Emmanuèle remembering, at psychologically propitious moments, how insensitive, judgmental and controlling André was when Emmanuèle was growing up and we notice he hasn’t changed. A talented pianist, his parents pushed him into business and as a successful industrialist, he earned enough to become an important art collector.

There are no flashbacks to show how André’s desire for a boy to replace the son the couple lost affected Emmanuèle. But we see her in boxing practice, going to the gym and listening to her father’s favourite Brahms concertos. And perhaps her decision not to have children with her kind-hearted husband, Serge (Éric Caravaca), a film programmer and museum curator, was a reaction to her own childhood.

That André did have children is more down to spite than the fact that André is gay. Spite – against Claude’s parents who disapproved of the marriage – that is so strong he initially refuses to be buried with his wife in Paris because it’s her “horrible family’s plot” but relents so the grandchildren can visit him conveniently.

A subplot involves André’s tempestuous lover Gérard (Grégory Gadebois). The two have fallen out, and André refuses to see him, but Gérard comes to represent the kind of love that will do anything to keep André alive, as opposed to Emmanuèle, who expresses her love by giving him his wish to die with dignity.

During a visit to her father’s intensive care room, André seizes Emmanuèle’s hand and, his weak, strained voice, commands, ‘I want you to help me end it.’ She is so shocked and afraid that she runs out of the hospital. This is the film’s dividing point. The second half speeds up and opens out, without losing the procedural detail of the first half. Only now the procedure is the complex process of assisting dying.

What Ozon suggests, but fails to dramatise, is that André always had to be the first to travel somewhere or know about something. He was so competitive that if anyone – even his daughter – saw a film before he did, he would be upset. Realising he would not be an influencer anymore, no doubt contributed to his radical decision.

The key figure in this half is “The Swiss lady” from The Right to Die with Dignity clinic in Switzerland, played by 78-year-old Hanna Schygulla who was Rainer Werner Fassbinder’s muse in the 1970s. When Emmanuèle tells the Swiss lady, ‘he was a bad father. I wish I could have known him as a friend,’ she replies, then help him – as a friend.’

The problem is, André is not only recovering, at least in the short term, but is so elated that Emmanuèle is arranging his death, that he wants to squeeze in as much life as possible before the end. When he learns the price of the Swiss trip, he ponders,’ I wonder how poor people can afford it.’ Emmanuèle pointedly replies, ‘they wait to die.’ ‘Poor things,’ André muses. Later in the film a Muslim ambulance driver tells André that what he is doing is against his religion, while his black colleague asks, ‘why do you want to do this, Mr Bernheim, life is so beautiful?’

The film is not a manual, but very much the story of one wealthy, cultured and educated Jewish family’s experience with assisted dying. In Ozon’s hands, the sensitive subject is not only rendered cinematic, but suspenseful, tearfully moving and hilarious as André’s death is continually put off by lifetimes commitments.

At one point in the tense circus that surrounds the sisters being hauled into the police station, causing Serge to miss his Buñuel retrospective so he hides André in their flat, is reminiscent of Luis Buñuel’s social satire, The Discreet Charm of the Bourgeoisie. In that semi surrealist comedy, a group of upper middle class Parisians attempt, amid continual interruptions, to dine together, but never quite manage it.

The sisters hold out hope that André will change his mind – the Swiss lady said one man, after seeing his young wife in an expensive new dress, decided to live. We do too, as does Gérard. But André a true bourgeois, values his quality of life too much to merely exist.

While the film is faithful to the novel, Ozon’s subtle alternations are everywhere. When André says goodbye to Pascale, he whispers, ‘tell your sister this would make a good subject for one of her books.’ That line is not in the book.