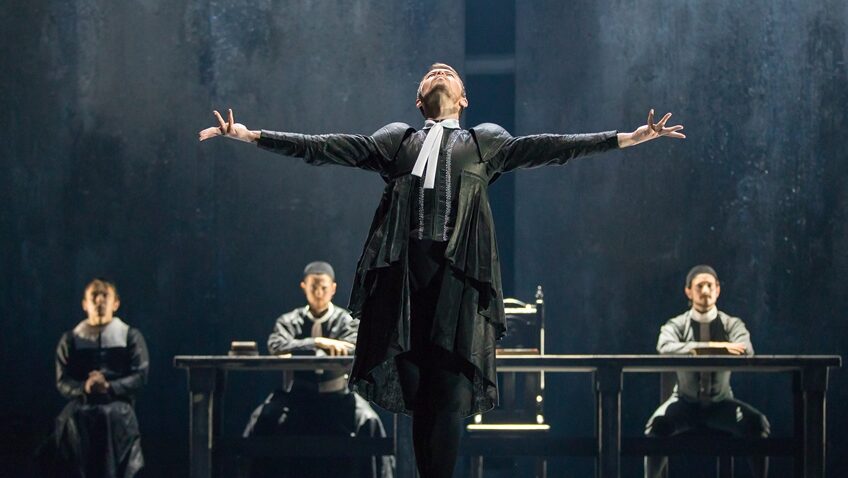 Though Arthur Miller’s The Crucible is based on the notorious witchcraft trials in Salem in 1692, his powerful and chilling history play actually came out of his own experience of Senator Joe McCarthy’s equally notorious witch hunt of communists in the 1950s when Miller refused to incriminate others and was blacklisted by Hollywood.

Vengeance is walking Salem. A God-fearing community in Massachusetts is terrorised into paranoid fury. Truth and justice are perverted and the only way to survive, if you were accused of witchcraft, was to admit to having seen witches. Those who did not confess were hanged.

Miller’s play, verbally strong in argument, is not an obvious choice for a ballet. It succeeds far better than you might think. Choreographer Helen Pickett and musician Peter Salem have achieved a remarkable dance-drama adaptation, capturing the tight-knit Puritanical society in the grip of hysteria.

The minimalist production looks good. Emma Kingsbury is set and costume designer. David Finn is set and lighting designer. The ballet is a series of dramatic tableaux in home, church, forest, courtroom and prison

The dancers are actors. The performances are emotionally strong. The physical and the musical dynamics have a terrific impact throughout. The tension is great

I much enjoyed Pickett’s distinctive choreography. I much enjoyed the extraordinary sounds, Salem creates. Absolutely riveting; the ballet would not be the success it is without his brilliant score.

If you don’t know Miller’s play, I would strongly advise you to read the synopsis beforehand.