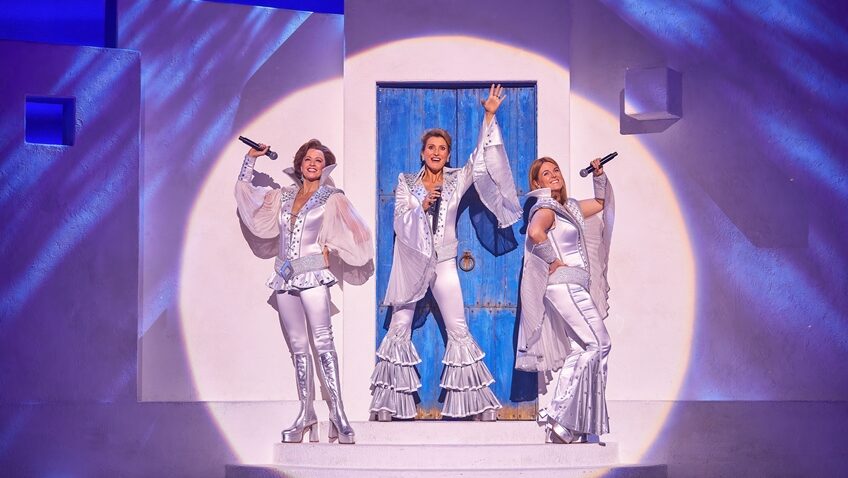 The show is well known to many, after all it has been made into a smash hit movie starting Meryl Streep, Pierce Brosnan, Colin Firth and Julie Walters amongst others,whilst the stage version premiered in the West End over 23 years ago and has since played to over 65 million people around the world.

Twenty year old Sophie is getting married, she lives on a remote Greek island with her mother, Donna who runs a small hotel and taverna, but Sophie has never known her father. What she does discover, through her mother’s diary, is that there she has three potential dad’s but no one is sure which is the real one, not even Donna.

Sophie, determined to find out the truth invites all three to attend her upcoming nuptials, without telling her mother, or indeed the men why they have been invited. Meanwhile Donna has invited old friends (and former bandmates as they were briefly a girl band, The Dynamics), Rosie and Tanya and so the fun begins.

The story is told through the songs of ABBA as we hear such hits as Honey, Honey, Chiquitita, Dancing Queen, Super Trouper, Gimmie Gimmie Gimmie and of course Mamma Mia, each one telling a story of its own and every one a banger that’s for sure. In fact’s there’s over 20 numbers performed throughout the show and you are guaranteed to know them all!

The stage set is simple, revolving, literally around the taverna, but that doesn’t take anything away from the show, especially the contribution of the ensemble who are full of energy throughout. Stand out performances on the evening came from Phoebe Roberts who was a stand-in Sophie, Helen Anker as the thrice divorced Tanya and of course Sara Poyzer who was superb as Donna. If there was one criticism of the show then that would be around the sound in the theatre, especially during the opening medley to both halves – it was just too loud and wasn’t properly balanced, and as a result very harsh on the ears, but that’s just a small criticism.

If you’re not on your feet during the show then you will be come the end singing along to the final numbers. A blockbuster of a show and well worth seeing.

Mamma Mia! is playing at the Bristol Hippodrome until 02 July and then tours the UK. You can book tickets by following this link.

For details of future venues and dates you can visit the Mamma Mia! website by following this link.