Home / LIFESTYLE / REVIEWS > / FILM REVIEWS / Everything is possible, even a very good, if not great, sequel to Mary Poppins 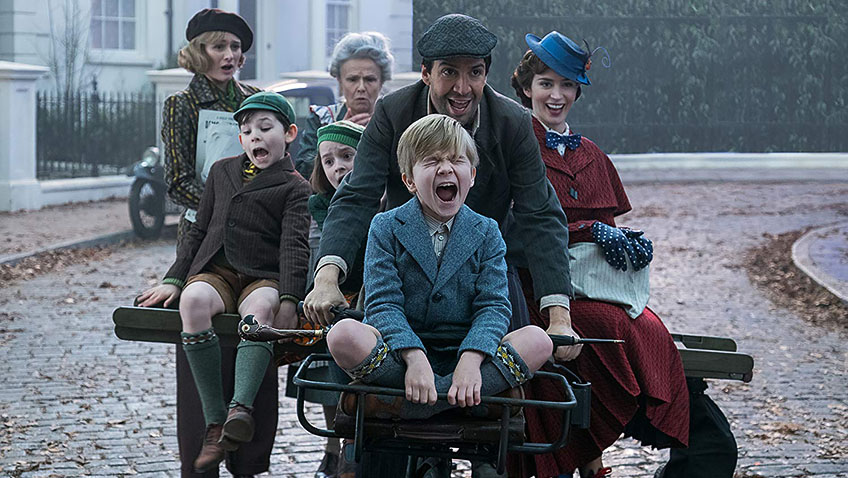 Everything is possible, even a very good, if not great, sequel to Mary Poppins

Do we really need a remake – or a sequel – to Mary Poppins, director Robert Stevenson’s 1964 with songs/music by Richard M. Sherman and Robert B. Sherman and an Academy Award winning performance from Julie Andrews? Judging from the silence of some 250 children in the audience for the entire 130-minute running time, the answer is yes. Mary Poppins wasn’t perfect and Rob Marshall’s Mary Poppins Returns

certainly isn’t, but both films make excellent use of P.L. Travers’ books

to impart an important message with enthusiasm and spectacular special effects.

Marshall (Into the Woods, Chicago) and David MaGee (Finding Neverland, Life of Pi) have set their story, as did P.L. Travers, during the Great Depression, a period of uncertainly, shortages and financial worries for the Banks family – perfect for our Brexit times. When things look impossible the child in all of us all needs a little magic, fun, music and imagination to convince us that ‘everything is possible, even the impossible.’

is a bona fide sequel, taking place 25 years after the nanny’s first visit to Cherry Tree Lane, many of the objects, references, set-pieces, dance numbers and characters are not so much new as reworked. It is as though the filmmakers have put a sheet of tracing paper over the original film but created different images to tell the same story.

In just one example, in the original, the children and Mary Poppins meet Uncle Albert, whose uncontrollable laughter has floated him up in the air where they join him for a tea party on the ceiling. The equivalent is a visit to Poppins’ unlikely cousin Topsy who is charged with mending their mother’s bowl that the children want to sell to stop the foreclosure of their house, although they are informed it is worthless. They pay a visit to Topsy on her upside down day, and they decide to join her seeing the world in a different way. We get the message quickly, but the great Meryl Streep is ill-served by this hackneyed eccentric Eastern-European character. 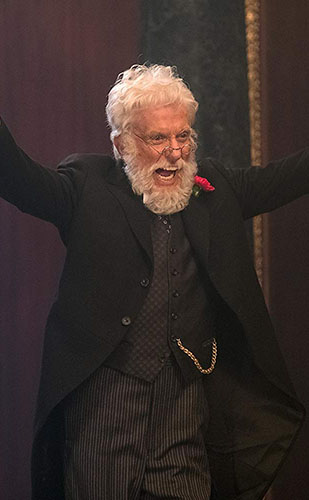 The Banks’ children, Michael and Jane, are now grown up and Michael (Ben Whishaw), who has just lost his wife (the song, ‘A Conversation’ is meant to pull at the heart strings) has three young children of his own: Annabel (Pixie Davies) John (Nathanael Saleh, who looks a lot like Ben Wishaw) and adorable little George (Joel Dawson). Whereas Michael’s father and grandfather worked for the Fidelity Fiduciary Bank, Michael is an artist. With the depression, he is forced to take a job at the bank as a clerk under William ‘Weatherall Wilkins (Colin Firth), the film’s villain. Wilkins is CEO, effectively ousting the Chairman, Mr. Dawes Jr (Dick Van Dyke – who took this role in the original) as the head of Fidelity Fiduciary Bank. Dawes Jr still goes to work every day, however, and Van Dyke, now 93, has a short song and dance number where he rants against ageism, backing his claims with a tap dance. His cockney accent, however, has not improved over the years.

Michael’s sister, Jane (Emily Mortimer) is, of course, grown up, too, but she is involved in politics, campaigning for workers and women’s rights etc., and has no time for romance. Until that is, Poppins pushes her onto a rickety bicycle with Jack, the omnipotent lamplighter (who is introduced singing Under the Lovely London Sky) while cycling around the City.

Jack is played by Hamilton creator (and, on Broadway, lead actor/singer) Lin-Manuel Miranda. To say there is no chemistry between this pair is an understatement, but while Miranda has loads to do in the film, Mortimer has very little, other than to wear outfits that are far too varied and colourful for a struggling family in the depression– and to fall for this incredibly nice guy. 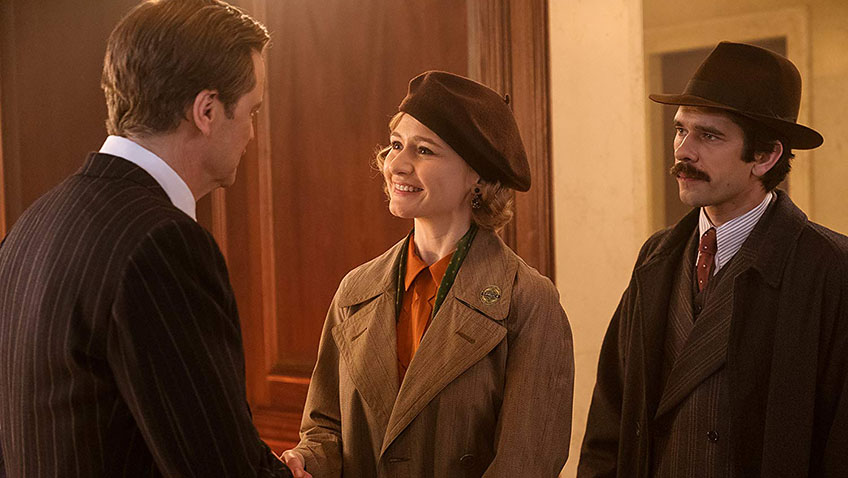 Julie Walters is great as the family maid but David Warner has a thankless role as a old Admiral on the rooftop next door whose canon never – until the end – goes off at the right time but causes china to break. Is it really funny? A much more welcome cameo is from Angela Lansbury as the balloon lady who sends everyone up in the air on balloons at the end. She was not in the original, but her character does appear in one of the novels. While the balloons and characters floating into the air at the end look great and get the ebullient message across, environmental groups will be in despair as balloons end up on the beaches and in bird and mammals stomachs far more often than you would imagine.

Lamplighters, who were still around in the 1930s, have replaced chimney sweepers and there is a terrific dance routine – the best set piece in the film – using the lamp posts a bit like Gene Kelly in An American in Paris, but he didn’t have all those bicycles.

Emily Blunt is excellent stepping into the shoes of Andrews, discreetly teaching – or reminding – the parents what the kids naturally know. While the songs are not on a par with those by the Sherman brothers, Marc Shaiman has done a good job, and Poppins’ The Place Where Lost Things Go’ is terrific. It is beautifully sung and enacted by Blunt in her terrific dresses that, along with the pre-WWI world she represents, intentionally belong more to 1910 than 1930. Sandy Powell (who is the costume designer on The Favourite, out in January to name a few) is again the talent behind the costumes and one day the V & A ought to devote a show to her. 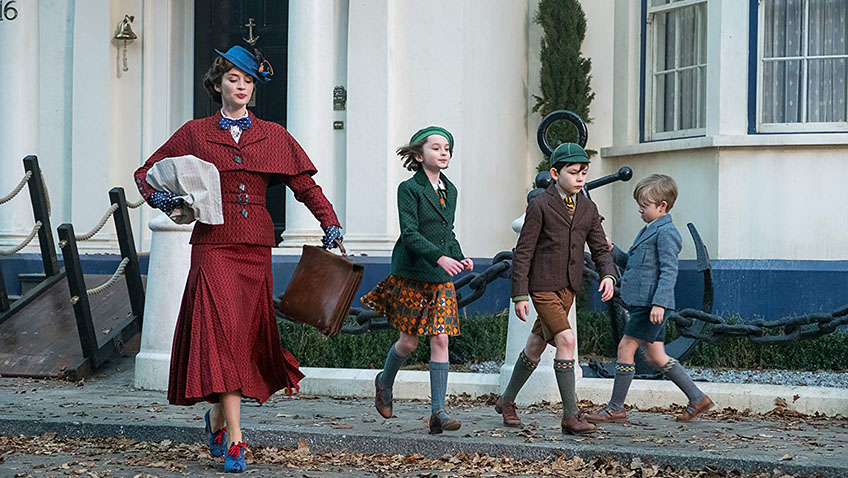 , and the filmmakers get mileage out of her timeless saying, ‘Everything is possible…even the impossible.’ Unfortunately, when it is necessary to do the impossible by giving Michael enough time to get to the bank with his proof of shares before midnight, magic seems to be in short supply, as does imagination. Climbing Big Ben and physically changing the hands of the clock is not only reckless tampering with state property and a crime of criminal trespass but is more of a time-filler than an instance of how magic and imagination get the job done.

are episodic in nature, the filmmakers face a challenge creating suspense and continuity. Many of the musical numbers end with the end of the song and there is no connection to the following scene. This puts pressure on the set pieces to carry us along and hold our interest. In general the filmmakers handle this with skilfully, but a long, animated segment in which the carriage wheel painted on the broken bowl (yes, that again) comes to life becomes tedious. What is wonderfully effective, however, is how it is used to show that a child’s fear of losing his home finds its way into nightmares that replace the sweet dreams we wish on all children.