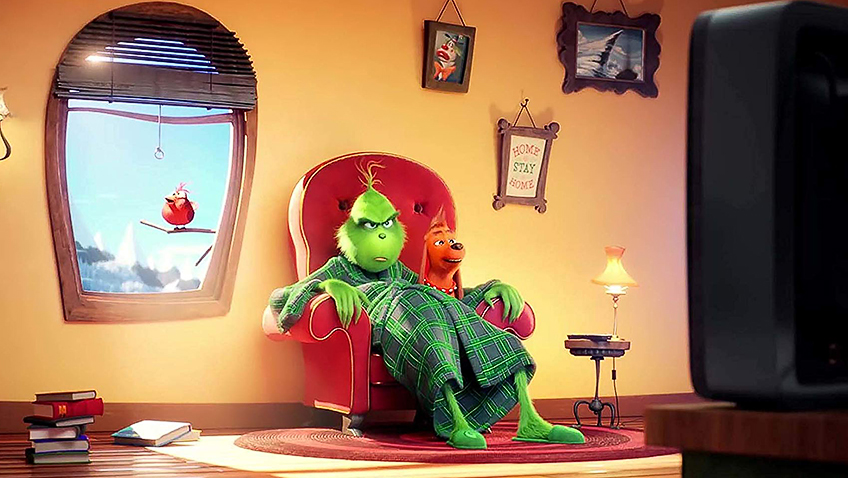 In 2000, nine years after the death of “Dr. Seuss”, his illustrated children’s story How the Grinch Stole Christmas!

, was turned into a feature film. This was the first (in 1966 there was a television series) of his stories to be adapted for the big screen, since he was in principle against feature adaptations. For all its shortcomings, Ron Howard’s film was the perfect vehicle for a dazzling Jim Carrey, and audiences of a certain age might still see Carrey (and even hear his voice) throughout Scott Mosier and Yarrow Cheney’s new adaptation, voiced by Benedict Cumberbatch. The target audience, children 4-12, will not have this problem, and will adore the colourful, cheery, snow covered village of Whoville, the cosy cottages with children’s presents under trees, and Cumberbatch’s performance as the voice of the artificially green, furry Grinch.

Imagine an alpine resort where instead of ski gear, everyone is dressed in the United Colours of Benetton, and there is no crime, no unemployment to speak of, no dirty ice and no litter. If you can think past The Ones Who Walk Away from Omelas

, Ursula Le Guin’s short story about a utopian town like Whoville with a chilling secret, the only threat to Whoville comes from a disgruntled outsider, Grinch, whose psychological problems prevent him from fitting in.

The Grinch has some legitimate complaints about the commercialisation of Christmas which rings even truer now than they did in 1957. This issue might not be entirely resolved by the surprise that, even without the presents, the town comes together through Christmas carols, the joy of Christmas and family dinners. You can imagine some youngsters in the audience wondering if they could overlook the disappearance of all those wrapped boxes and the tree itself.

The film remains faithful to the original, although like Ron Howard’s 2000 version, this tighter 90-minute adaptation has to pad out the very short, skeletal underlying source. Unlike Wes Anderson’s adaptation of Roald Dahl’s Fantastic Mr. Fox, this is no bad thing, in principle, as Seuss’s rich premise and characters call out for development.

But this adaptation, by scriptwriters Michael LeSieur (adult comedy Keeping Up with the Joneses) and Tommy Swerdlow (author of the ill-fated Snow Dogs) includes a back story for the Grinch that is so developed and sentimental that it almost undermines the fun of his crusade against outward displays of Christmas. In the story, we are only told that the Grinch’s heart was too small. It’s a muscle that can, however, be enlarged through use. 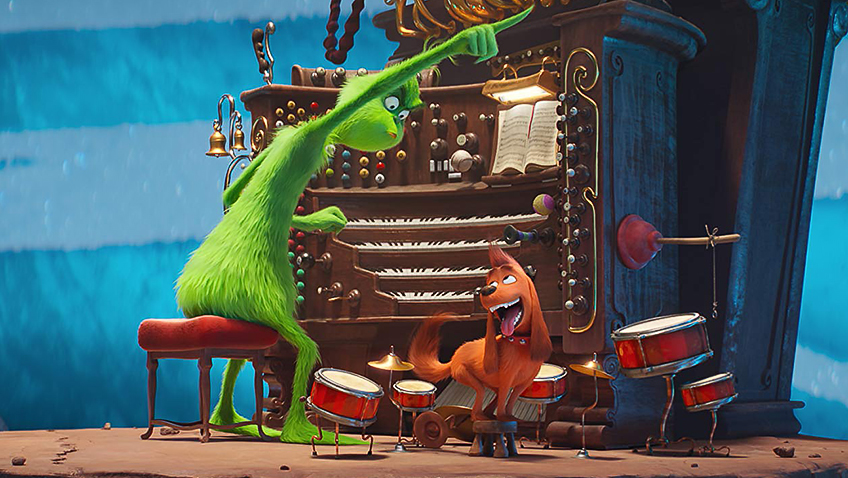 Benedict Cumberbatch in The Grinch

Be that at it may, The Grinch, aided by his faithful dog Max, finds himself with an empty larder and is forced to leave his elaborate cave residence on the top of a mountain and make a shopping trip into Whoville. Some of the Grinch’s self-analysis is funny, as when he stares at the empty kitchen stores and his protruding belly, asking, ‘How much emotional eating have I been doing’ (a silent flash back provides the answer, showing the Grinch stuffing his face with spaghetti).

On the way into town, the Grinch decapitates a snowman, breaks a jar of condiments that a short lady is trying to reach from the top shelf and enjoys other little acts of protest. Nothing though, is as devilish as his plan (engendered by the arrival of the largest Christmas tree in the town’s history) to steal Christmas.

Young Cindy-Lou (Cameron Seely) also has a lot more to do here than in the original story, including a rather unnecessary sequence when she enlists her friends to help her trap Santa Claus for a tête à tête. Cindy-Lou, who wants only for her single-mum’s happiness and nothing for herself, is the Whoville resident whose altruism and generosity so astonishes Grinch that he is forced to rethink his attitude toward Christmas. 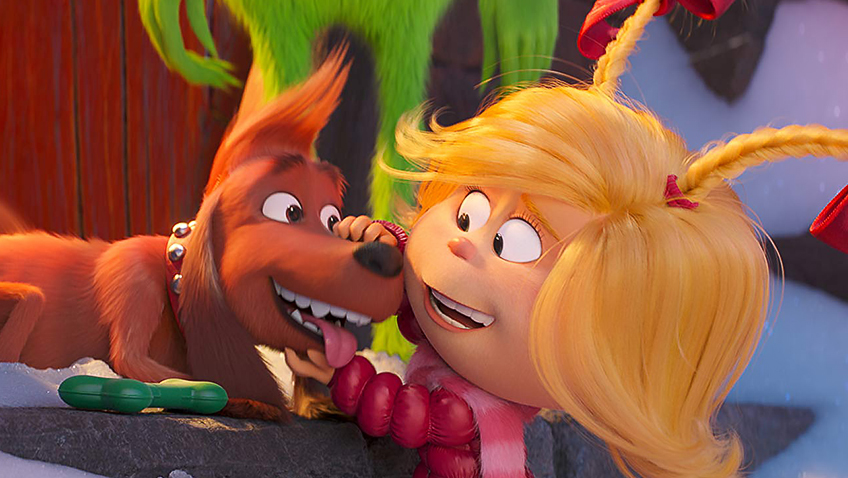 Cameron Seely in The Grinch

The protracted ending is so sweet and sentimental that you don’t have to be Scrooge to reach for the Insulin. Still there is a solid and timeless message about inclusion and the importance of friends and family over material goods that will hopefully make it through the part of the film where the presents and trees are returned intact.

The cast is fine, with the imaginative casting of Pharrell Williams as the narrator (reciting many of the original rhyming verses from Seuss’s story) and Angela Lansbury, albeit in the small role of the Mayor of Whoville. It’s a shame that the production could not benefit from the original title, as this is nothing if not a Christmas movie.