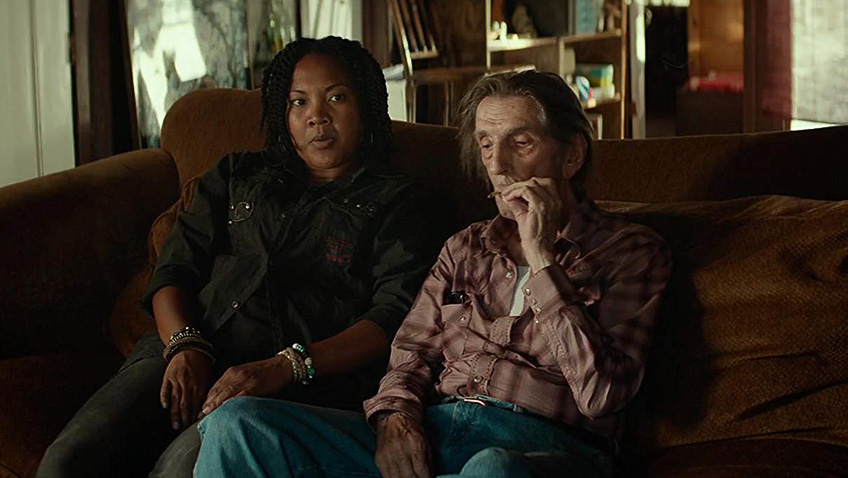 Lucky (Eureka). Harry Dean Stanton is Lucky and Lucky is Harry Dean Stanton. Logan Sparks and Drago Sumonja wrote the script specifically for him. A cantankerous 90-year old man lives on his own in a small town in the middle of the Arizona desert. He has a daily routine and he sticks to it. The script is about the inevitability of death and about living the moment and facing the void and accepting the truth. Lucky, looking very old, gaunt and frail, is a realist and he’s both scared and stoical. The film, an affectionate tribute to a popular character actor and a celebration of his talent, was released in the US just days after Stanton’s death at the age of 91.

Tom’s Midnight Garden (Second Sight) is about Time and reality. A modern boy (Jeremy Rampling) wanders round a garden in his best striped pyjamas and finds a Victorian charity child (Caroline Waldron) and tries to explain to her that he is alive and it is she who is dead and a ghost from the 1880s/1890s. The multi-award winning classic children’s fantasy by Philippa Pearce, published in 1958, has been televised many times. This charming 1989 mini-series version would make a lovely Christmas present for a child. Grown-ups would enjoy it, too. It’s perfect family entertainment.

March of the Penguins 2: The Next Step (Lionsgate) is a documentary about the marching emperor penguins. There is the march to the coast for food. Teenage penguins worry about taking the first plunge into the sea. There is the march to the breeding ground. The commute is hazardous both ways. In between there’s a lot of standing around in tight groups to keep warm. Antarctica’s vast emptiness is freezing and hostile. Father’s have to be feet-on dads when it comes to looking after the egg. How do fathers find their son after a long absence when everybody looks the same?  If the ice continues to melt the emperor penguin faces extinction by the end of the century.

Swimming with Men (Universal). It sounds gay. It isn’t gay. It’s not Swimming with Sharks, either. It’s much nearer to The Full Monty; but not as real and not as funny. A middle-aged City accountant (Rob Brydon, totally serious) is going through a bad patch, worried about his marriage, his boring job and getting old. So he joins an all-male amateur synchronised swimming team and they compete in a championship in Milan. The script is cliché-ridden. There is a lot of artificial tension and a lot of unlovely middle-aged bodies. The final schmaltzy parade in bathing trunks in the street is merely embarrassing. The cast includes Jim Carter, Rupert Graves and Daniel Mays.

Hitler’s Hollywood (Eureka). What does the cinema know that we don’t? This documentary covers the period 1933 to 1945, an age of blatant propaganda, and shows how the Nazi-cinema indoctrinated the Germans and prepared them for the Holocaust. Rigidly controlled by Goebbels, the productions put self-sacrifice, death and kitsch at the top of the agenda. There are tantalising extracts from the G. W. Pabst/Werner Krauss Paracelsus. The disc also includes Rudiger Suchsland’s excellent 2014 documentary, From Caligari to Hitler: German Cinema in the Age of the Masses, which covers the 1918-1933 period and is much more enjoyable, primarily because it is so much richer in its footage of old films. The clips are longer, too, and the actual commentary is much more lively and accessible.

Skyscraper (Universal). The tallest building in the world is on fire. Did you see the Paul Newman/Steve McQueen The Towering Inferno back in 1974? The new inferno is without any reality whatsoever. Dwayne Johnson has to do a lot of absurdly impossible things – and he has only one leg to do them with.  He is playing an amputee. This physically demanding rubbish is aimed at the Die Hard non-thinking action market, rather than a disaster movie base. Director Rawson Marshall Thurber momentarily pays homage to (I.e. cribs) Orson Welles’ mirror sequence in Lady from Shanghai.