Home / LIFESTYLE / REVIEWS > / FILM REVIEWS / The unpleasant, hybrid creatures in CATs are not the only problem 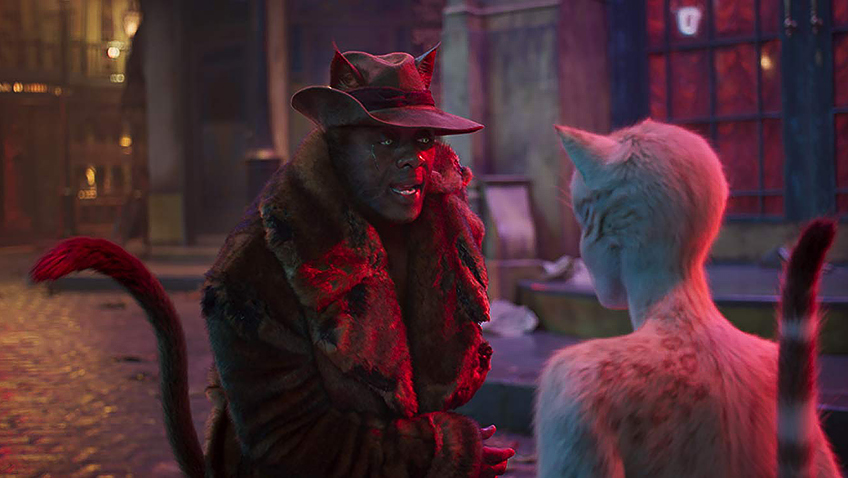 The unpleasant, hybrid creatures in CATs are not the only problem

In 1939 T.S. Eliot sent a series of cat related poems to his godchildren, signing his letters Old Possum. His publishers realised the wider potential of Eliot’s most accessible poems and published Old Possum’s Book of Practical Cats

. Andrew Lloyd Webber was not the first to set the poems to music, but his stage musical made the most extensive use of them and was a huge success. If you’ve ever wondered why the musical was never turned into a movie, go see Tom Hooper’s (Les Misérables, The King’s Speech) Cats

. Despite the international all-star cast and a few good singing numbers, Cats

is a misguided adaptation and a cringingly unpleasant visual spectacle.

The big mystery is not what a Jellicle cat is, although we never do find out, but why no one behind this film questioned the look of the human cats. What we see when the film begins (after a cartoony blue moon and clouds) are two legged, upright creatures with human arms, furry body suits, whiskered human faces and tails. Most of us have seen centaurs in old master paintings or in Picasso’s, but there was a gasp in the audience at the sight of this new hybrid monster.

Try as you may to acclimatise to the rather repulsive sight, it gets worse when Rebel Wilson’s fat cat starts scratching her private parts. What is the point in hiring Royal Ballet star Francesca Hayward to play Victoria, if you are going to hide her sculptured body in a costume that makes her beautiful legs look chunky and leaden, while limiting her movement and grace?

Musicals on stage do not need a strong storyline, as the success of yet another West End transfer of Girl from the North Country confirms. But in motion pictures we expect more than a cabaret. Here we get a series of garish, overproduced musical numbers so loosely set in a story that they ramble on episodically until you suddenly realise that Old Deuteronomy (here played by a female – and none other than Dame Judi Dench) has yet to choose the cat who most deserves another life. And that’s the alleged climax of the film.

Naturally, there has to be a special musical number devoted the cat who will be chosen (spoiler alert!), and Andrew Lloyd Webber, not Eliot, wrote the catchy, now famous Memory for this purpose. The problem is that it comes out of nowhere, and if ever a song needed a lead up, this is it. We get the big pay-off before we’ve earned it. 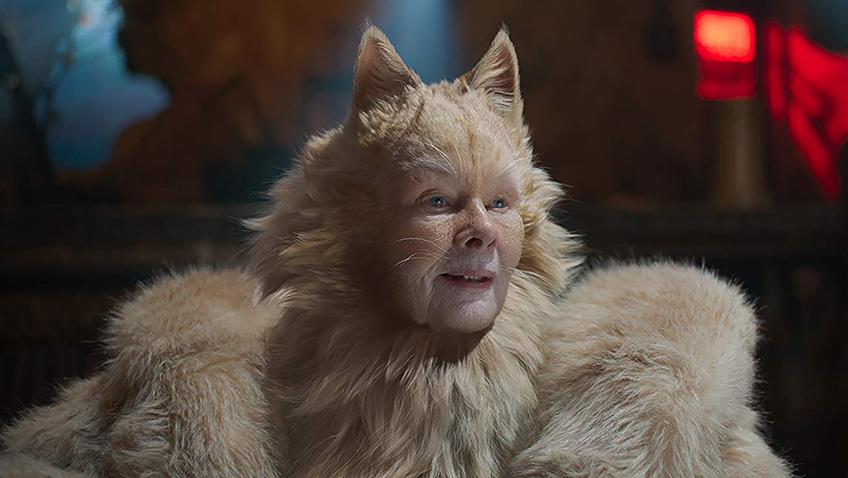 Grizabella, (Jennifer Hudson) is a washed up former glamour cat who is now a homeless bag cat sleeping in the gutters. But we haven’t seen her former life and her fall from grace, so it’s hard to identify with the degradation of her current status. The lyrics are clearly moving but Hudson is the only one weeping. We can feel a bit more emotion when Grizabella/Hudson sings the song again after the saintly Victoria takes pity on her – or identifies with her. Victoria persuades the Jellicle cats who have ostracised Grizabella to welcome her back into the fold.

That’s it for the story. The thread wound through the musical numbers is the sweet, innocent and pretty newcomer with an identity crisis, the aforementioned Victoria, played with one, wide-eyed, beatific expression on her face. That might pass at Covent Garden but not for the close ups Hooper lavishes on this whiskered face. 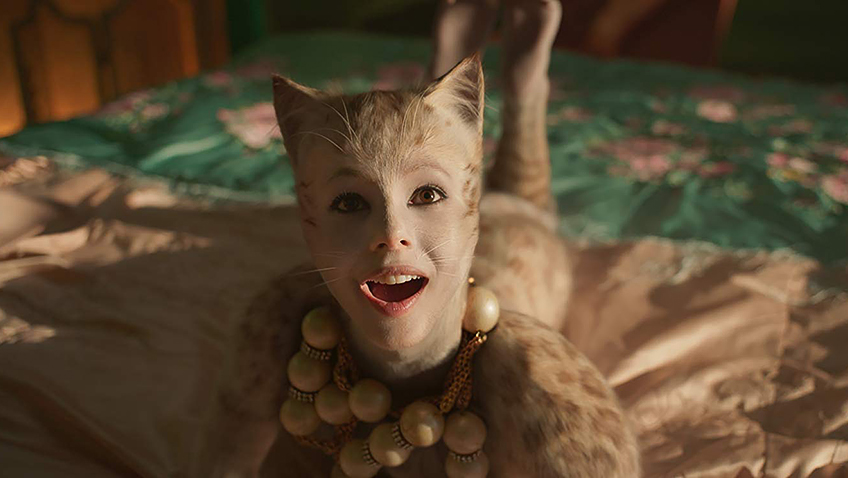 Victoria is eager to befriend others and gets into trouble sneaking into a bourgeois home. She is rescued by Mr Mistoffelees (Laurie Davidson), a magician cat in a black and white tux who has the hots for Victoria. The furniture is blown up to appear much bigger than the “cats” but it doesn’t work. Davidson tries hard, but he’s no Wayne Sleep (who created the role in the original production in 1981).

Mistoffelees has his own eponymous musical number. He is insecure about his untested magical powers but has a go when it’s the only hope of saving Old Deuteronomy. She has been abducted by the criminal (and film’s villain), Macavity, and, though it seems unlikely and far-fetched, the cats think that magic can bring her back. And sure enough, encouraged by Victoria of course, and the supportive cat chorus, after many failed attempts he eventually succeeds.

Oh, that he had failed. Bringing back Judi Dench, who looks like a haystack being rolled into the barn during a hurricane, is not the treat it normally is. Her many musical numbers, mostly talk-sung in close-ups, are delivered so blandly you start to pity her more than Grizabella. 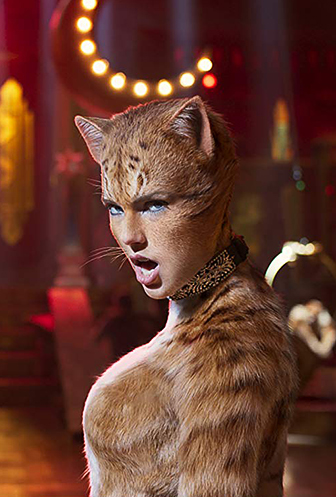 But there is worse in store for Idris Elba who, as Macavity, might have lowered the odds on becoming the next James Bond. Anyone seeing him here will never forget it, and this is one performance he will want us to forget. That said, Taylor Swift as Bombalurina does a good job singing the number Macavity, the Mystery Cat, even if her Las Vegas-like staging is not the most atmospheric for a criminal cat who disappears into dark alley ways and shadows.

Capturing dance numbers is a specialised skill, as we need to have the impression we are not missing out on the whole arrangement, even when the camera goes in for a close up. Cinematographer Christopher Ross did a good job capturing large crowd scenes and concerts with the film Yesterday but that is the opposite of what is required here.

Arguably, the only good dance number is Steve McCrae’s Skimbleshanks in the group number Railway Cats. This is not only because McCrae is an energic, talented dancer. Ross uses wide-angle establishing shots, cutting to close ups of McCrae’s tap-dancing shoes fluidly and then zooming out again to give us the full body view. But what is most noteworthy about this number is that Skimbleshanks is not noticeably covered in fur but dressed like a railway worker and looking human.

If the cats are going to look like cats anywhere, it is surely in Trafalgar Square where they can’t be mistaken for pigeons. But in this final scene, as a large number of them jump off the lion statues and disperse, they take on the appearance of the wild Barbary Macaque monkeys on the Rock of Gibraltar; only with tails.