Home / LIFESTYLE / REVIEWS > / FILM REVIEWS / The entertaining and beautifully-acted adaptation, that should have been more 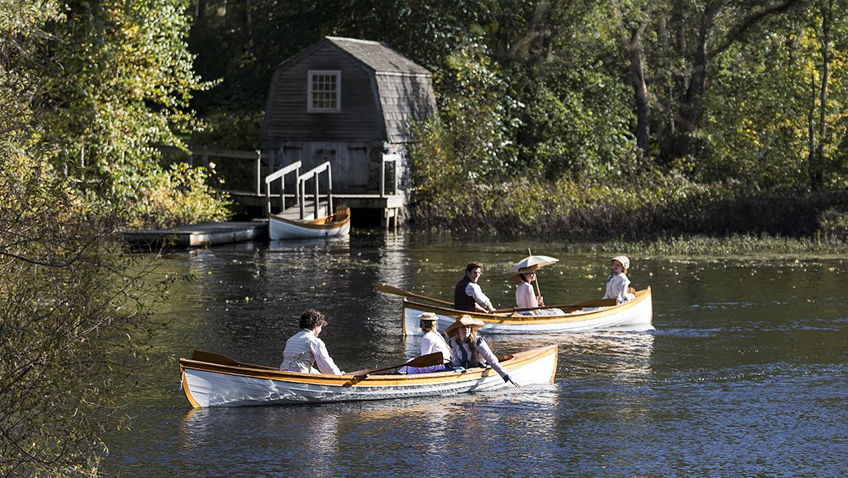 The entertaining and beautifully-acted adaptation, that should have been more

, there is no definitive version or Christmas perennial, so the question of whether we need another is a moot point. Every filmmaker wants audiences to discover it anew.

Such is the case with actress (Mistress America) -turned-writer-director (Lady Bird) Greta Gerwig, who, in the production notes, points out that the two-part novel is “about women as artists” and “women and money”. It’s “all there in the text” [but] “this hasn’t been delved into before in adaptations.” Little Women

is skilfully made, wonderfully acted and constantly entertaining, but these intriguing themes are only superficially explored, while the darker subtext of the novel is underplayed.

Popular for being among the first novels to depict the ordinary lives of four financially struggling, creative sisters, the novel is nonetheless so preachy and moralistic, (in some episodes, the moralising is as long as the event described) that most adaptations, and certainly, Gerwig’s, dispense with it. What’s left is an episodic coming-of-age story about a lively, close-knit group of sisters and their saintly mother (Laura Dern, terrific) and their marginalised father’s return from the Civil War.

Gerwig has assembled a wonderful cast, each perfect in his or her respective role, and has ingeniously written the script so that the exploits of the adult March sisters (in their 20s) and their younger versions (ages 12-16), though played by the same actresses, are – with one or two exceptions – seamlessly interwoven. There are two distinct story lines, but Gerwig begins the story with the adults, because the memories we retain of our childhood are filtered through our adult eyes.

After rejecting her besotted neighbour and childhood best friend Laurie’s (Timothée Chalamet) proposal of marriage, the fiercely independent, Tom Boy Jo (Saoirse Ronan) is living and writing in NYC. There she has met the man she will marry, Professor Friedrich Bhaer (Louis Garrel), in inauspicious circumstances. He makes the mistake of giving her honest feedback of her sensational and spy novels, which are selling – but not nearly as well as Little Women

will, when she heeds his advice. 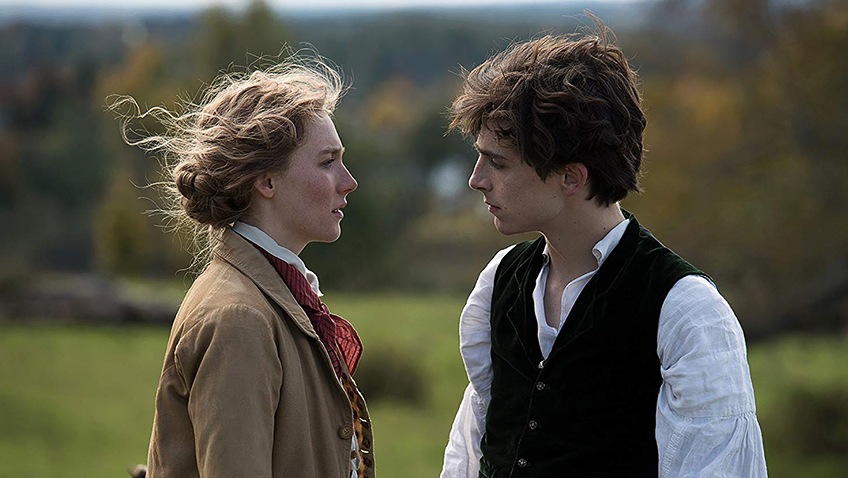 Even more so than in the novel (Jo was largely modelled after Louisa), the film’s point of view is distinctly Jo’s. That said, Jo is not present, of course, when Amy (an excellent Florence Pugh, Fighting with my Family, Lady Macbeth) is in Europe, presumably developing her talent for painting. Under wealthy Aunt March’s supervision (a superb Meryl Streep), however, she is really husband hunting.

The clever intercutting of the adult/child story lines helps keep Gerwig’s fast paced, boisterous and vivacious style moving quickly, but at times the pace and the non-linear structure leave us feeling like we’ve missed something. We never learn what happens with Jo after she rejects Laurie’s proposal. Suddenly she is in NYC and he is in Europe, discovering a reciprocated fondness for Amy. Though presented as true love in the film, the chemistry between Ronan and Chalamet (who worked together in Lady Bird) is such that it feels like Laurie is settling for second best. And Amy returns from France married, leaving us to wonder why a member of such a tightknit, religious family would deny her family the opportunity to attend the wedding?

Though semi-autobiographical, there are key aspects of her life that Louisa changed. Her father, Bronson (Bob Odenkirk), a renowned progressive educator, who often could not support his family, was 62 when the Civil War began and so he was not away fighting. It was Louisa who fell ill serving as a volunteer in Washington DC, not her father as in the novel and movie. It was Louisa who was reticent about writing for girls, not her publisher, who encouraged her to write what became Little Women 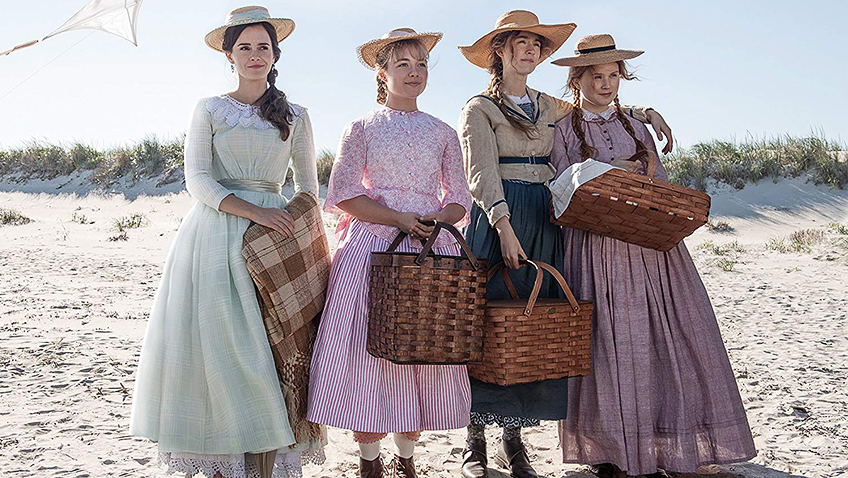 The main difference is more central to Gerwig’s vision. In the film though Jo vows she will never marry, she is given a romantic love scene and happy marriage. Louisa never did marry and there was no Laurie in Concord. Louisa apparently confessed that she was more attracted to women than to men, but “modern” as Gerwig’s adaptation purports to be, this might have been a step too far in an adaptation.

The problem is that though Gerwig seems intent on breathing new life into her favourite childhood novel, her Little Women

is, in the end, a romcom with a tragic death. All three surviving sisters marry and have children and two are supported by men, while we see Jo working in a school she opens with her husband at the end. 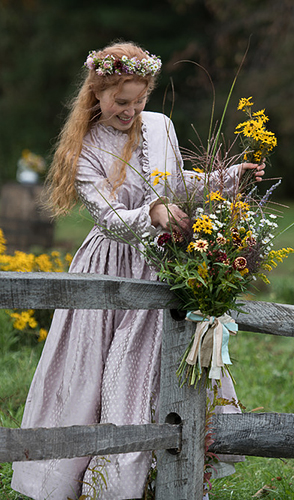 This is a missed opportunity for a writer-director determined to emphasise the artist/women and money aspects of the novels. Why remain so doggedly faithful to the novel if it means Meg’s (Emma Watson) “art” – her talent for acting – is glossed over? The real Meg (Abigail May) was a promising actress in amateur dramatics who actually met her husband, also an actor, rehearsing in a play.

And while we last see Amy, who has renounced her career, in the family home married with a babe in arm, the real Amy had a relatively successful career in Europe. Though praised by Ruskin for her copies of Turner, she showed original canvases in the Paris Salons and is buried in Paris, not in the family plot. And speaking of women and money, it was Louisa’s royalties from Little Women

that put Amy through the top art schools. Amy married an artist, but it was marriage, or the inevitable consequences of it in those days, childbirth, that killed her.

Gerwig also maintains that the book is a lot darker than we recall, although little of the darkness is brought out. We see the girl’s sharing their breakfast with their social-worker mother’s impoverished Irish immigrants and hear that Beth (Eliza Scanlen) might have died from one such visit. But contagion (typhoid, TB, pneumonia) and early death was all around the Concord community, with neighbours Henry Thoreau and Nathaniel Hawthorne dying two years apart from TB and Louisa dying from a stroke two days after her father, who was bedridden with a stroke.

And the Marches are presented as a stable, happy family living in the same, comfortable house for many years, when in fact they moved 22 times in 30 years. And though the movie, like the novel, fudges exactly what the girls were doing in their youth – only the youngest, “Amy” went to school – the reality was that Louisa, at 15, was working as a seamstress, governess and domestic helper. Although she was surrounded by famous intellects and writers in Concord and encouraged by her father, this multi-tasking makes Louisa’s prolific writing all the more commendable.