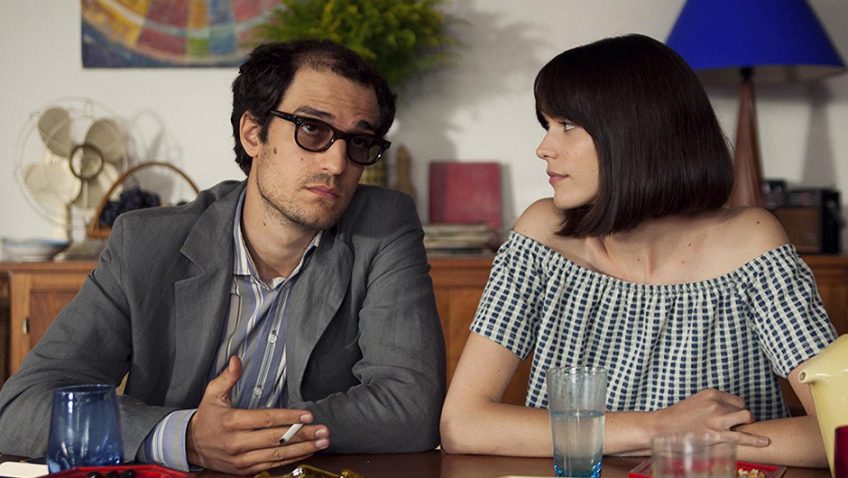 Jean Luc Godard struggles to reconcile his art, marriage and politics in this bitter-sweet comedy

, ‘The Artist’ director Michel Hazanavicius’ bitter-sweet biographical comedy, has come under fire from fans of Jean-Luc Godard, many of whom frown at the portrayal of the famous French New Wave auteur at a painful crossroads in his life and career. Redoubtable

is Hazanavicius’ clever adaptation of Un An Après

, actress Anne Wiazemsky’s autobiographical account of her 12-year marriage to the revered Swiss director of Breathless, Contempt, and Pierrot Le Fou. Many (thematically repetitious) scenes in the book are omitted, but only one (a hilarious car ride from Cannes to Paris that may well have happened) scene has been added. Hazanavicius has ingeniously added the humour that perspective and distance can provide to Anne’s humourless, but more star-studded, account. Equally ingeniously, he cast the marvellous Louis Garrel (whose godfather, Jean-Pierre Léaud, co-starred in Godard’s La Chinoise) as Godard.

is the story of the breakdown of the high-profile marriage of a famous director and an adoring neophyte actress and pedigreed wife, it is also the story of a filmmaker’s attempt to reconcile his artistic genius with his political conscience. Despite his neediness and jealousy, we see how Godard gradually alienates Anne, not only by rejecting her values and friends, but through cruelty and embarrassing, uncivil behaviour. It is almost as though Godard knew this was a journey he had to make alone and wanted to make his departure easier.

Anne, 20, is the beautiful daughter of a French diplomat and Russian prince, while her maternal grandfather is Francois Mauriac, winner of the Nobel Prize in Literature and biographer of the 1968 protesters’ nemesis, DeGaulle, who, like Mauriac, died in 1970. By contrast, the homely Godard, 37, is ‘tired of amusing the bourgeoisie’ and is humbled before uncouth student leaders who can show him how to devote his art to a permanent revolution.

When the film begins, Godard has just completed La Chinoise, a loose adaptation of Dostoyevsky’s The Possessed (or The Demons). The film is about the ideological persuasions and delusions of a group of young French Maoist radicals and marks Godard’s abandonment of his New Wave classics for a cinema of engagement. Godard is shocked and wounded by the biting reviews, made worse by the number of adoring fans who approach him in the crowded, revolutionary streets asking, somewhat ironically, ‘when are you going to make more films like Breathless?’

Anne, who excelled as Veronique in La Chinoise, feels, ‘lucky to admire the man I love; the man who revolutionized cinema ten years earlier.’ If Kirillov, the suicidal Russian engineer in La Chinoise, is driven to insanity and suicide by his failed philosophical quest, so Veronique adopts a declaration of unlove to harden her feelings toward her revolutionary lover as she goes off to assassinate Russia’s Minister of Culture. Though Anne marches beside Godard in the streets during the wonderfully depicted riots (where he really did lose his glasses) and is sympathetic to change, Anne’s revolutionary fervour does not extend beyond acting. 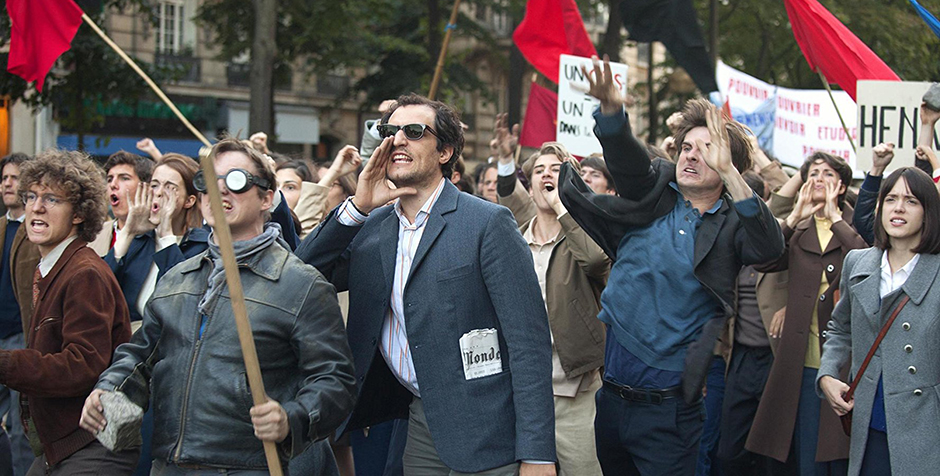 What drives the wedge between Anne and Godard is far more than Godard’s tiresome jealousy. It is a gradual drifting apart in which an often hypocritical Godard burns his bridges and insults Anne, her friends and family. Many of the incidents and anecdotes lifted from the book are turned into comedy to highlight Godard’s hypocrisy and the irrational conduct that reveals his unease in straddling two worlds.

One example is Godard’s determination to close down the Cannes Film Festival in
solidarity with the students and workers. He is horrified to find Anne sunbathing in the villa of a wealthy newspaper owner where their entrepreneurial friends Bambam (Grégory Gadebois) and Rosier (Bérénice Bejo) are holidaying. Revolutionaries are not supposed to look rested with glamorous suntans while their comrades are falling in the streets. When Godard discovers there is no petrol for him to return to Paris, Bambam and Rosier point out that it’s the workers’ strike that is responsible for the lack of petrol and trains to Paris. Even behind the sunglasses, Garrel’s expressive face and body language has us laughing at his dialogue. Anne recalls that Godard was, more than once, forced to laugh at his tantrums, and in the film we are never laughing at him, but rather with him.

There is, however, a deadly serious scene in Anne’s hotel room in Italy where she is starring in a film while Godard has gone to Czechoslovakia to shoot a film with the radical activist Jean-Pierre Goran, co-founder with Godard of the Dziga Vertov Group. Godard has left to join Anne, ostensibly because he fears she has found a lover. During a particularly painful dinner in the hotel restaurant, Godard is so nasty that Anne is not speaking to him by the time they retire. When Anne awakens in the morning, Godard is lying unresponsive next to an empty jar of sleeping pills. 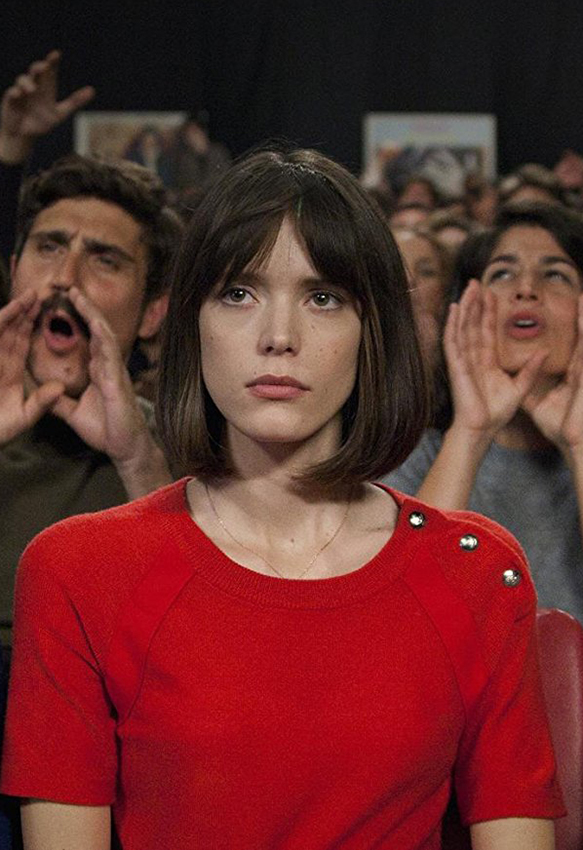 Anyone who has seen La Chinoise will, in the context, be reminded of the suicidal Kirillov’s struggle with his extremist nihilistic views. We do not, of course, know how Godard felt about his collaboration with Dziga Vertov, but aside from using Brechtian forms and Marxist ideology to distinguish the style of their films, they are marked by an absence of personal authorship. While Anne’s book does not imagine experiences that she did not share with Godard, Hazanavicius puts us on the set of Pravda, where we watch as Godard, accustomed to calling the creative shots, is forced to agree with a decision by committee. There is something terribly sad in watching the world’s foremost auteur relinquishing artistic control.

In an homage to the master, Hazanavicius references Godard’s bright pastel colours and innovatory stylistic techniques throughout the film. And in one scene, where Anne, with Godard’s backing, turns down a starring role in a film requiring full nudity, the two are brushing their teeth, stark naked. This scene would not look out of place in a Godard film. That scene might even be an attempt to show how you can present serious questions about personal and artistic compromise within an entertaining film.

Because the couple’s years together coincided with the 1968 student/worker manifestations and Godard’s masochistic quest to reconcile his left wing politics and ‘bourgeois’ cinema, Redoubtable

is much more than a film about the breakdown of a marriage. If the film is let down by Stacy Martin’s vacuous portrayal of Anne Wiazemsky, an actress with considerably more talent than Martin, Louis Garrel’s inspired performance as Godard is an uncanny pleasure.