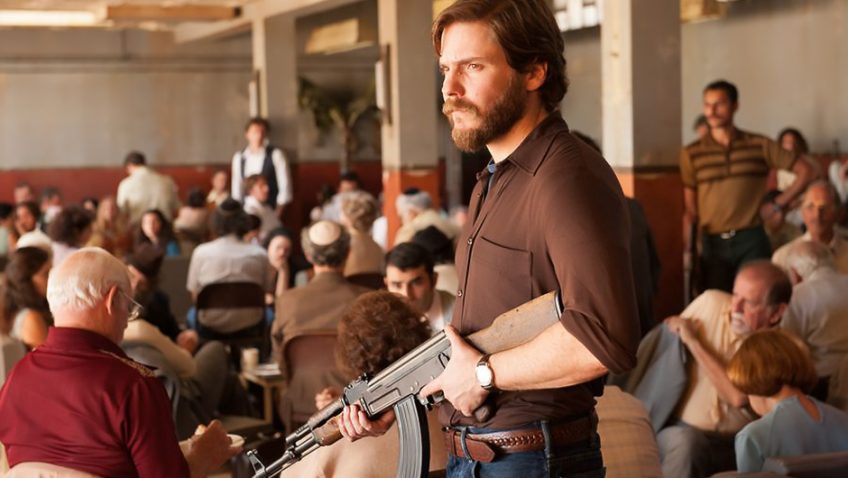 There is no anniversary or other obvious occasion for making a film about the daring Israeli hostage raid on Entebbe Airport 42 years ago, but there is an interesting link with the present. The only Israeli soldier killed in the 29-man unit assault unit on the armed Palestinian and German hijackers inside the airport was handsome, young and courageous Lt Col Yonatan Netanyahu (Angel Bonanni). Yonatan was the brother of the current Israeli Prime Minister, Benjamin Netanyahu, the only man to have been elected Prime Minister three times in a row. He is also the man who, with Trump behind him, did nothing to stop the controversial relocation of the US Embassy to Jerusalem and is under no pressure to reopen Palestinian peace talks.

José Padilha’s film is a lacklustre fact-based drama, but what it does well is to chronicle the events surrounding the hijacked Air France Flight 139 en route from Tel Aviv to Paris, via Athens with clarity and precision. Focusing on key individuals, we have the point of view of the 248 passenger/victims, 83 of whom are Jewish and Israeli, and a French crew of 12 (represented by French actor Denis Ménochet, playing an Air France engineer). For something grotesque, there is Dictator Idi Amin (Nonso Anozie) who welcomed the terrorists to his airport. For a realistically portrayed political chess game we have a wary Prime Minister Yitzhak Rabin (Lior Ashkenazi) who knows that true courage is in negotiating with the enemy vs. Hawkish Minister of Defence Shimon Peres (Eddie Marsan) who is waiting for Rabin to make a costly error.

Rabin’s first instinct is to seek a diplomatic solution directly, and by asking Sadat and Arafat to use their influence with the PLO and the Ugandans. But he is under pressure from the hostages’ families and from Peres who has come up with an audacious plan, but one that could just work and quickly. The availability of this military option puts Rabin in a quandary in the event negotiations fail. Rabin’s problem is that negotiating is not flavour of the month with the Israeli population and going down this route would have repercussions on his career. The hijackers are threatening to start shooting hostages from 1 July if their demands are not met. 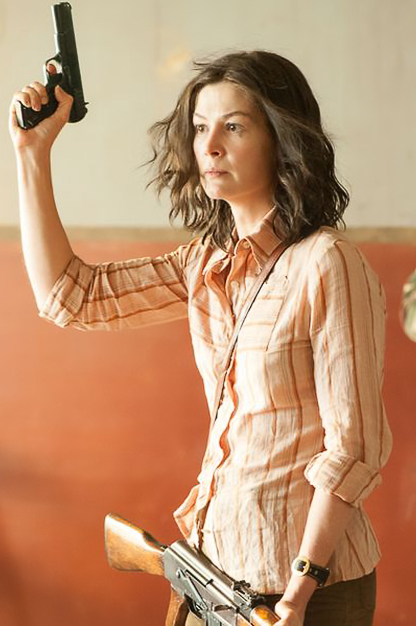 Perhaps the most interesting point of point of view, which honestly came as a surprise, is that of the German terrorists Brigitte Kuhlmann (played by, of all people – Rosamund Pike) and Wilfried Bӧse (predictably portrayed by Daniel Brühl, the man to call when you need someone vaguely German. Since Goodbye Lenin, and his celebrated performance in Rush Brühl has been squandering what talent he has in Euro-pudding fare and your heart sinks to see his name on the credits here. But he is surprisingly credible as Bӧse, a book shop owner who lived with Kuhlmann before she dumped him for Gerd Schnepel. You get the impression that Bӧse (who alone tried to protect the hostages during the raid) ended up in the Red Army out of sympathy with the Palestinians, but without any plans to die a martyr.

Kuhlmann comes across as a cold fish, but she wrote poetry and took care of her disabled parents before abandoning everything to train with the PLO in Yemen. She worshipped Ulrike Meinhof who had just died in prison a month earlier, and is convinced that Ulrike would never have hanged herself.

Kuhlmann and Bӧse hear that support for the Baader-Meinhof group is waning and this operation had the potential to inspire a new generation of recruits. Yet Bӧse is disturbed by the fact that, while many of the hostages were released in Entebbe on 1 July (three days before the rescue/raid) Jews and Israelis were, with the exception of the Air France crew, who felt duty-bound to stay, the only remaining hostages. If the PLO demands are not met, they will have to start shooting hostages.

Bӧse is conscious that, along with the Vietnam War, what Baader and Meinhof most objected to was their generation’s burden of guilt and blame for the actions of their Nazi elders, including Meinhof’s own parents. And now, as Bӧse reminds Kuhlmann, ‘it is Germans killing Jews. Did you ever think about that?’

Gradually, too, the German’s realise they are being used by the PLO who are only interested in bargaining for money and the release of their imprisoned people and not in promoting the Red Army Faction’s agenda. ‘We Palestinians have no atom bomb so we must use other means to fight against the Fascist Zionist state of Israel’ one heavily armed PLO leader tells the Germans.

At one point, scriptwriter Gregory Burke (who wrote the acclaimed Edinburgh Fringe play Black Watch) introduces a welcome bit of dark humour when the Israelis ask a retired IDF officer (reportedly Baruch Bar-Lev, who is not in the credits) to phone Idi Amin with whom he had reportedly built up a relationship. The negotiator tries flattery and dangles the possibility of winning the Nobel Peace Prize in front of the dictator, but ultimately only fear of defeat has the cowardly Amin remembering his grandmother’s prophecy. 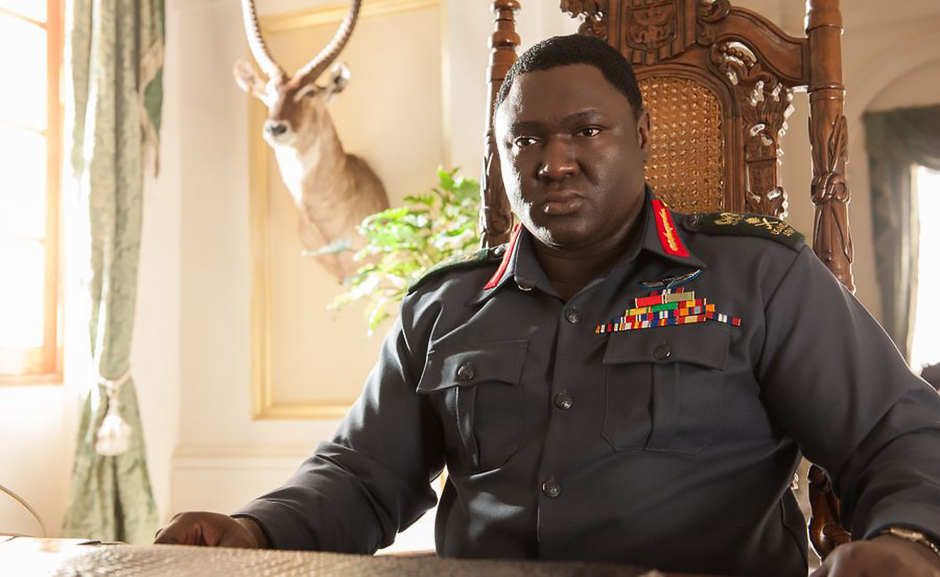 The filmmakers strive for authenticity by having the character speak their own languages, but the policy is not consistent. The notable exception is the entire Israeli cabinet and army who for some reason (Eddie Marsan, otherwise fine, being one) speak in English. To her credit, Pike seems to have taken an intensive course in German, and with the help of an admirable voice coach, converses with Brühl.

The problem for Padilha is creating suspense when we know the outcome and he does not succeed. It might have been possible during the actual rescue, given that the plan was for the soldiers to approach the airport in a black limousine used by Amin, But Padilha scuppers his chance at a thunderous finale by electing to use slow motion during the actual assault, and worse, intercutting the action with a loud modern dance by the Batsheva Dance Company, dancing to a modern version of the traditional Jewish song Echad Mi Yodea. Padilha might appreciate the song’s metaphorical meaning, but for the audience trying to get into a real life action story and enjoy a bit of heroism and just desserts, it is more than annoying.

For years Israelis argued about who was to blame for the early fire that gave away the critical element of surprise in the plan, but audiences know nothing of that because they are subjected to a distracting dance act. This is the culmination of many scenes ruined by the intrusive dance, and there is even a little subplot about a dancer whose boyfriend has been assigned to the dangerous Entebbe mission.