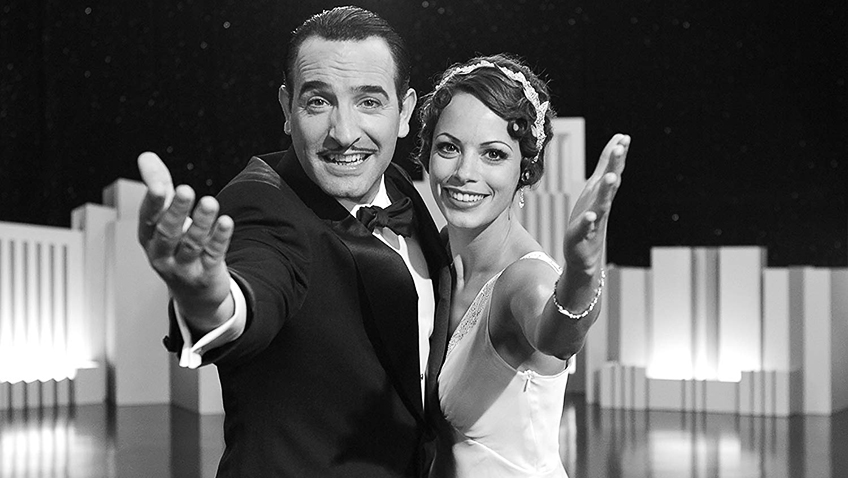 If the name Michel Hazanavicius is known to anyone in the UK it will be a handful of cineastes who caught the French director’s farcical spy capers, SS 117, Cairo, Nest of Spies, and Lost in Rio – all of which starred the handsome, 40-ish actor Jean Dujardin. Now Hazanavicius, Dujardin and ‘Cairo’ co-star Bérénice Bejo (Hazanavicius’ real-life wife), are tipped for major awards around the globe and Oscar nominations will surely follow for The Artist

doesn’t get around Hazanavicius’s problem with sub-titles because it’s a silent film — so now, even the French have to read them. The story – a combination of Singin’ in the Rain and A Star is Born – won’t win prizes for originality, either. But if ever there was a cross-over film destined to boost a director’s international fan base, this romantic love story about the impact of the ‘talkies’ on the lives of two performers is it.

, Dujardin plays George Valentin, a blend of Douglas Fairbanks Jr and Errol Flynn (both of whom he resembles), and is the man men want to be and women want to be with. As the film opens we are viewing the climax of The Russian Affair, the film-within-the film. It’s a nail-biting adventure story in which Valentin is being tortured for information. When all looks lost, a Jack Russell (Uggie — the dog that BAFTA members want to nominate for Best Supporting Actor) comes to the rescue.

In a throw back to Dujardin’s Bond-spoof spy capers, Valentin escapes in a sports car with a sexy dame as the sound of applause fills the room. We are in fact at the film’s premiere, and Valentin, with an infectious glimmer in his eye and the widest smile since the Cheshire cat is waiting behind the curtain to take his bow – and then some.

As Valentin continues his ego trip outside posing for the paparazzi, a chorus girl and would be actress, Peppy Miller (Bérénice Bejo), sneaks into the limelight, leaving the press – and the intrigued Valentin – wondering, ‘who’s that girl?’ When Peppy and Valentin meet again months later, it’s in a delightful sequence where we see them tap dance from the knees down, separated by a curtain (an obvious reference to It happened One Night).

A now-smitten Valentin gives the ingénue her break and a star is born.

As in Singin’ in the Rain, news of talkies, initially dismissed by Valentin’s producer, Al Zimmer (John Goodman) has to be taken seriously when the Jazz Singer is released. Within months, Valentin’s films appear old fashioned. Zimmer deserts him and scrambles to catch up with the competition. While Valentin watches his career, wife, and wealth disappear, not helped by the stock market crash of 1929, he starts to drinks himself to death in a Spartan flat. 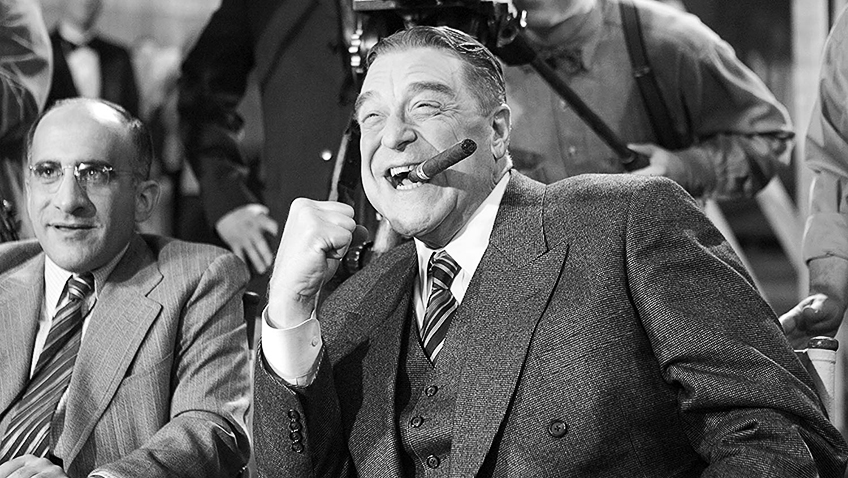 John Goodman in The Artist

Valentin’s only company is now his co-star, the dog, and his faithful valet/chauffeur, Clifton (James Cromwell). Unbeknown to Valentin, however, there’s someone else who continues to love and believe in Valentin: Peppy Miller.

The ensuing quid pro quo between the rising star and the falling star who once gave her a break is all the more enjoyable as it is based on romantic love as well as mutual admiration. But Hazanavicius’s astute script gives us much more. Fleeting fame is contrasted touchingly with demonstrations of loyalty. In addition to Miller and Clifton, the heroic little dog comes to Valentin’s rescue in a fire just as he did for his master’s film persona in The Russian Affair.

Nor are we denied plenty of humour and the glamour of Hollywood between 1927 and 1932. As a bonus we are also treated to tours of some of the classic art deco Hollywood mansions of the 1920s and early 1930s when the studios were turning actors into film stars.

isn’t, however, a great silent film in the way Murnau’s Sunrise, is. For one thing, the film is self-consciously ‘silent’. And there is sound, including a musical score (by Ludovic Bource) that does not accompany the film on a piano. For another, it was shot in colour by Hazanavicius’ regular cinematographer, Guillaume Schiffman and transferred to black and white. Schiffman contributes to the period feel by shooting in the Academy Ratio which was standardised in 1932 – but was in use as early as 1928.

The story is not only familiar – it is basically Singin’ in the Rain merged with A Star is Born – with references to a myriad of other films – but it is thoroughly predictable. Nor does the twist at the end (which happens early on in Singin’ in the Rain) really make sense as it doesn’t solve Valentin’s initial problem in the long term.

Still, you won’t want to miss this film. Go to be charmed by Dujardin and Bejo and be entertained by how cleverly Hazanavicius reconstructs a silent film. Audiences of the 1920s would probably want something more to their story, but today we are entertained by the magic of Hazanavicius – the real artist of the title.