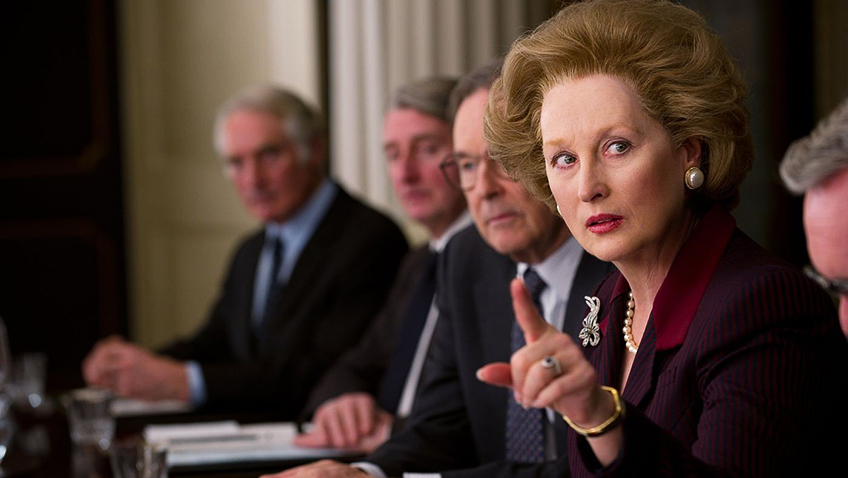 Alexandra Roach is excellent as the young, ambitious Margaret Roberts

Every writer and director wants to stretch Meryl Streep. So far the double- Oscar winner (and 16 times-nominated) actress hasn’t come close to snapping. Director Phyllida Lloyd tried pretty hard when choosing Streep as the singing/dancing hotel owner in Mamma Mia! but the public loved it. In their second collaboration, The Iron Lady

, Lloyd has pushed harder: casting the 62-year-old American actress in a biopic about the UK’s first female Prime Minister, 86-year-old Margaret Thatcher. The result must surely be a third Academy Award for Ms Streep.

The film is proof that no part is too challenging for Streep. She transforms herself beyond recognition and capturing the essence of Thatcher better than anyone could imagine. With The Iron Lady

, it is Lloyd, and her script writer, Abi Morgan, who have snapped. They have let audiences, Streep and the film’s subject down. As a biopic of this controversial female politician, The Iron Lady

Few mainstream film biographies make great films because they are too busy covering ground. That usually involves expository dialogue; lots of talking heads; and a plodding, though superficial, chronology of events. Here, the filmmakers’ attempted solution is to unfurl Thatcher’s life through flashes of the memories of a senile old lady brought down to size. The result is that nearly half the film takes place in imagined scenes in Thatcher’s Chester Square flat long after she has retired.

The great lady is seen sneaking past her minder to buy a pint of milk; serving husband Denis a boiled egg and clearing up the kitchen – so much for her warning young Denis that she would not be conventional housewife. It’s only when her personal assistant, June (Susan Brown), arrives that we realise this is all happening in the elderly lady’s mind.

The ghost of Denis (played by the ubiquitous – particularly in British biopics –Jim Broadbent), is present throughout the film as it takes place on the day Mrs Thatcher has agreed to clear out her late husband’s old clothes. All this mundane housekeeping has nothing, of course, to do with the story of England’s greatest female (and some might say, England’s greatest) politician. Its purpose is to serve as a memento mori (‘Remember you must die’), or, remember Maggie, you are not iron, but flesh – and senile to boot. 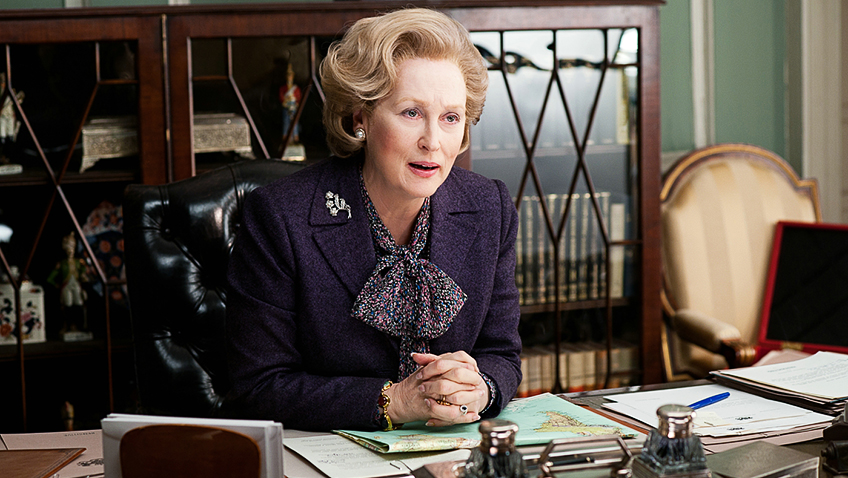 Meryl Streep in The Iron Lady

Signing copies of her memoirs, Mrs Thatcher hears a siren. That triggers a memory of the Blitz and young Margaret Roberts’ political awakening. In this manner we learn that the former PR was the daughter of Alfred Roberts, a Lincolnshire grocer and local Tory Alderman. While her father speaks, her mother washes the teacups. Margaret was the first in her family to go to University – Oxford – which was her chance to escape her mother’s fate.

Fortunately for an international, young or non-political audience, Mrs Thatcher’s memories come in neat, chronological segments and cover her courtship by Denis; the birth of her children; her rise through the Tory ranks to serious candidate; her speech drills where she learns to lower her high pitched voice; her triumphant election; the bombing in the Grand Hotel in Brighton (Margaret and Denis narrowly escaping with their lives) and her decisive command during the Falkland Islands War. We then rush through the humiliating back stabbing from men whom she thought were her faithful servants. When Michael Heseltine (Richard E. Grant) announces he will challenge her for the Conservative party leadership, she reacts like Julius Cesar might have had he overhead Brutus’s plan. 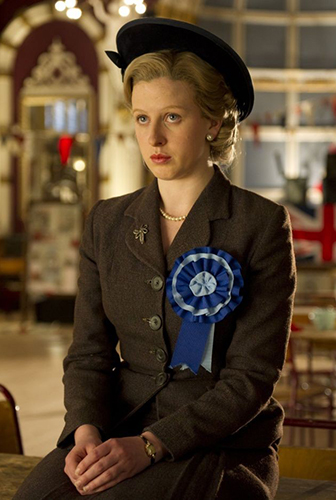 Alexandra Roach in The Iron Lady

What’s uncomfortable about the filmmakers’ approach is that it’s demeaning to a woman who is still alive and was, after all, a powerful Prime Minister. Much of it is also completely imagined because scriptwriter Morgan is not on record shadowing Mrs Thatcher in her retirement. And it is painfully contrived in that the unnatural memory triggers are organised like a Powerpoint slide show.

Moreover, since so much of the film is spent with the senile Mrs Thatcher, there is little time to flesh out her achievements and failures, let alone the characters with whom Thatcher lived and worked. Even the senility scenes aren’t as brave as they might seem. They include a visit from her living daughter Carol (Olivia Colman) but ignore the arrest, heavy fine and four-year suspended prison sentence of her son, Mark for his alleged participation in an attempted coup d’état in Equatorial Guinea. Could she even grasp that one?

More curious still is that the filmmakers have taken the politics out of a biopic of a woman who was political to her core. If you’re looking for historical insights, new information or exciting re-enactments, you’ll be disappointed. We get snippets of her union bashing and the withdrawal of school milk subsidies, but there is nothing to indicate the incredible Thatcher legacy. The script’s political point of view comes in the form of that memento mori. Is this a warning to female polititians about what to expect when you reach the top?

Ironically, but fortunately, the time spent with the retired Mrs Thatcher is the best part of the film. While Alexandra Roach is excellent as the young, ambitious Margaret Roberts, the film is Streep’s, and never more so than when she conveys the confusion, frustrations and regrets of growing old. How she does it is impossible to describe: the twitches of her face, little murmurs of sound, the faraway glimmer in her eyes, her perfectly coiffed hair against her wrinkled face and every gesture of a stiffening body. Beyond transforming herself into a Mrs Thatcher that few members of the public could differentiate from the real thing, Streep creates one of the most poignant and profound portraits of loneliness and old age ever captured on film.