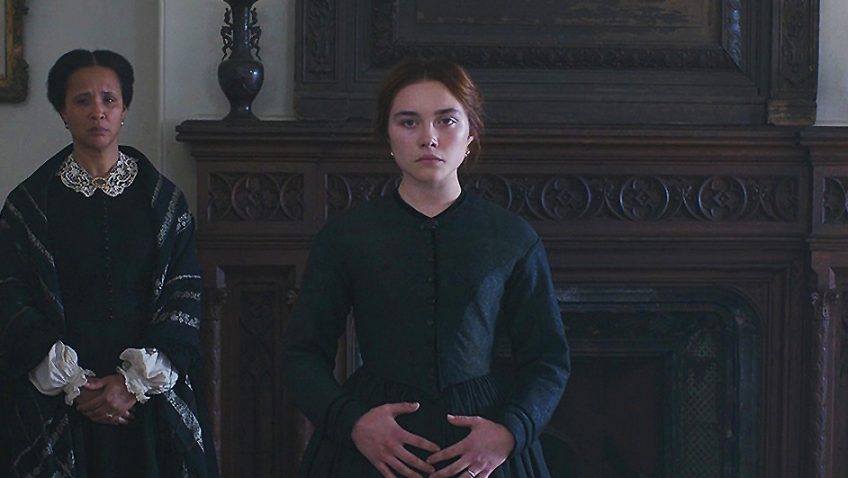 Absorbing and well-acted, this debut is not entirely satisfying

As theatre director, William Oldroyd directed a fringe production of Macbeth, but for his feature film debut he opts for an adaptation of the lesser known, though equally dark, Lady Macbeth

of the Mtsensk District, written in 1865 by Russian novelist Nikolai Leskov. This is a promising, if not quite triumphant debut, at the heart of which is 20-year-old Florence Pugh’s (The Falling) magnetic performance.

Leskov’s novel reads like a cautionary and punitive tale for lovers who break societal taboos. In its critique of a stifling, repressive Victorian society, in which women were chattels, it resembles Madame Bovary or Manon Lescaut, which was, like Lady Macbeth of the Mtsensk District, turned into a romantic, tragic opera. First time scriptwriter Alice Birch offers a new take on the novel, and provides an alternative scenario more akin to Francois Mauriac’s 20th century novel, Thérèse Desqueyroux, in the aftermath of the mariticide.

Oldroyd has transferred the story to 19th century North East England where, directly after her marriage, Katherine (Pugh), a teenage bride, is brought home to her 40-year-old husband Alexander’s (Paul Hilton) stark, cold farmhouse for her wedding night. In a short and deftly handled bit of exposé, we learn that Katherine’s father has sold her to an elderly colliery owner, Boris (Christopher Fairbank) as a wife for his morose, unaffectionate son.

In the Spartan master bedroom Katherine responds to her maid, Anna (Naomi Ackie) that she is neither cold nor nervous, establishing with those answers that this is no meek, fragile soul. Katherine has few illusions about her new husband, but his idea of a honeymoon is quite a shock. After ordering her to remove her nightdress, he takes one look and then leaves the room for the remainder of the night.

The last time we saw this reaction to a beautiful young woman’s body was in Richard Laxton’s film Effie Gray. Art scholar John Ruskin, accustomed to marble, white statues, was famously disgusted by his child-bride’s body on their wedding night.. The Gray/Ruskin marriage was never consummated in their five year marriage and it looks like Katherine’s marriage is headed the same way.

When Alexander goes off to attend to a fire at the colliery, Boris, before departing on a business trip himself, instructs Katherine to attend to her ‘duties as a wife’, to wait up for his return and to remain indoors. Controlling her fury at this, Katherine points out that her husband is never around, her tone is disrespectful to Boris and is peppered with sarcasm. There is a faint hint of absurd dark humour in the scenes between Katherine and Boris that is absent from the novel or opera.

In the first quarter of the film, Katherine is captured in tightly cropped medium shots to reflect her imprisonment. But when the two men are gone, Katherine makes the most of her freedom and the film reflects this liberation. 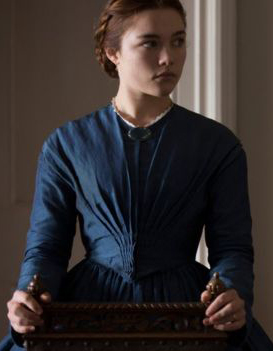 Opening the windows to let in the air and light, she removes the suffocating corset she is expected to wear and goes out walking on the moors, for Katherine has the stamina of her namesake, Catherine from Wuthering Heights, for whom the windswept wild moors represent passion and freedom, including sexual freedom. Jacqueline Abrahams’ austere production design for the interior scenes is contrasted with cinematographer Ari Wegner’s earthy, visceral exteriors that are reminiscent of those in Andrea Arnold’s 2011 film, Wuthering Heights.

During Catherine’s explorations she enters a farm building where a group of labourers have put a screaming Anna in a sack and hoisted her up by a rope to be weighed like an animal before slaughter. This is a terrifying moment, but Katherine, after freeing the semi-naked maid, is less disgusted at the men’s barbarism, than intrigued by the handsome leader, Sebastian (Cosmo Jarvis), who shows neither remorse nor humility.

That evening Sebastian audaciously sneaks into Katherine’s bedroom and the initial struggle turns into a passionate affair. Like Heathcliff, he has recognised a kindred spirit and we are losing sympathy for the heroine.

With Nick Emerson’s (Starred Up) precise editing, and the streamlined script that keeps the action in one location, Oldroyd keeps us riveted for the economical 89 minute running time. The round faced charismatic Pugh is a commanding presence as she changes from an entrapped girl to the expedient mistress of the house.

Also impressive is Ackie as Anna. It is interesting that Anna is black, while Sebastian (Jarvis is half Armenian) could pass for mixed race. Leskov’s novel was published at the end of the American Civil War, and while slavery had been abolished in law in the UK since 1833, wealthy families did have black servants. Anna’s passive acceptance of her fate can only be explained by her awareness that it would be futile to expect her word to be believed over that of her mistress. Though Oldroyd and Birch open the door to an interesting second angle on female servitude, they do not develop it in the portrayals of Anna or of Katherine.

When Katherine takes revenge on Boris for beating Sebastian, she suffers no repercussions from her bloody deeds. Shakespeare’s Lady Macbeth was overly ambitious, but was literally killed by her bad conscience. Katherine, once liberated, shows little interest in power or wealth – or in her conscience. Nor are her murderous thoughts confined to revenge on dictatorial men, as we see from her treatment of Anna and Alexander’s innocent, young ward, who forms a close attachment to her. Though absorbing, the film is not entirely satisfying as either the portrait of a sociopath or as a modern, feminist interpretation of the original novel.