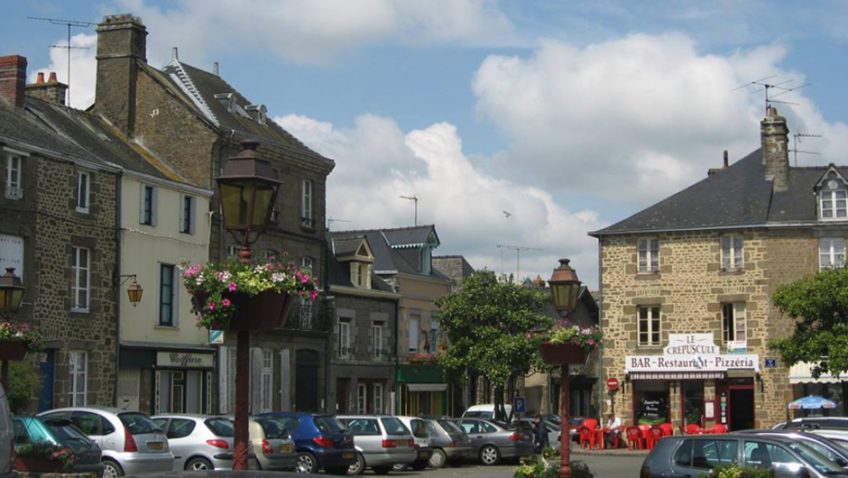 Our eight year French home owning adventure began with the first of many voyages from Portsmouth on Brittany Ferries Normandy and Mon St Michelle.

It was April and we were responding to a long standing invitation from friends of my wife Jenny to visit their holiday home in the picturesque village of Lassay Les Chateaux.

This delightful ‘ petite city of character’ sits in a bowl of hills in the area of Normandy Mayenne just an hour and three quarters along mostly straight and empty roads from the ferry port at Caen Oustram.

It was pretty much a case of love at first sight for Lassay with its village square overlooking a rose garden and stream tumbling into a lake dominated by a magnificent chateaux, the longest in continual habitation in the whole of France.

Within days we had found a three storey town house in a quiet lane behind the square accessed by an ally besides the bar and tabac, just how convenient was that?

Our prospective holiday home also had a garden with a shed close by and as we strolled along to see it, the estate agent produced a solid medieval looking iron key which should have been a bit of a giveaway.

For the shed turned out to be a two storey barn in a wildly overgrown garden inhabited by several chicken houses so that was it; we were well and truly hooked.

It only took eight weeks for the transaction to be finalised and we were about to go into Leonard Cohen’s sell out first world tour venue comeback concert at the O2 Arena when the agent texted us with his congratulations.

Just what had we done? We didn’t speak French and while Jenny is pretty practical, we’re not builders and the house really needed gutting.

There was a wood burning cooker in the kitchen, the entire stairwell had been battened, covered with hardboard and papered and the oak floor in the now feature top bedroom was completely rotten.

Suffice it to say, it took three days to strip out the property and three years to put it back together again but we had great assistance from practical friends and local tradesmen and lots of fun along the way.

Not many weeks into that first summer’s restoration and repeated visits to the bar for lunch where I had painstakingly asked for two cheese baguettes, mine patron slammed her pencil onto the counter and gave me a lesson I shall never forget. “No. No baguette,” said she. ‘Sandwich!’

Then there was the highly embarrassing morning we attempted to ask if the overgrown garden next to ours might be for sale only to give the entirely wrong impression that we Brits were complaining about its state. Definitely not the way to make friends and influence our neighbours.

We spent entire weeks working, including all Saturdays and Sundays, when people simply nodded their heads as they strolled by but gradually the light appeared at the end of the tunnel and we began exploring our surroundings.

Heads full of grand ideas we asked to look around a magnificent period property which had been for sale for years at a price that from our Brit perspective seemed an absolute bargain.

To our surprise the owner had left it full of lovely old furniture, ceramics, boxes of beautiful patterned tiles and much else which, by a stroke of good fortune, we were able to buy and carry off in triumph to weave into the fabric of our second home like excited magpies feathering their nest.

Gradually we began exploring this quiet undulating area of rural France and to realise how much there was to see and experience within just an hour’s drive and to weave into our regular visits a rich tapestry of historic towns, castles, chateaus, markets and gardens.

The Saturday market followed by lunch in the small and delightful lakeside spa town of Bagnoles del Orne became a ‘must’ as have been regular in time for lunch visits to the historic hilltop village of St Suzanne and to the riverside hamlet of St Ceneri le Generi whose medieval bridge is one of the most pictured in the region.

On more energetic days we’d make the twenty minute drive into Mayenne to cycle or walk along the wide river of the same name which meanders for 90 kilometres through woodlands, gorges and open country.

There is always plenty going on in Lassay itself with the chateaux and grounds being the centrepiece of a whole series of summer events from musical entertainments to tightrope walking between turrets.

By 8am on Bastille Day the centre of the village is crammed with stalls as villagers sell of their bric a brac as the curtain raiser to a whole day of celebrations and on that subject, towns and villages all over France have their vide greniers or street sales. We two magpies have spent many a happy day browsing around ‘vids’ which provide the perfect opportunity for exploring new places and bargain hunting and there is even a popular guide for them.

And if we spot a ‘Brocante’ sign on our travels then we can never resist calling in to these Aladdin’s caves of second hand treasures.

But sadly the time has come to bid a fond adieu to our French idyll as the growing demands of grandchildren continue to erode our travelling time so now our lovely fully furnished home from home is for sale.

Settling in for the new owner will simply take as long as is needed to unpack a suitcase and then maybe the time will be right to walk through the ally to the bar for a celebration drink.