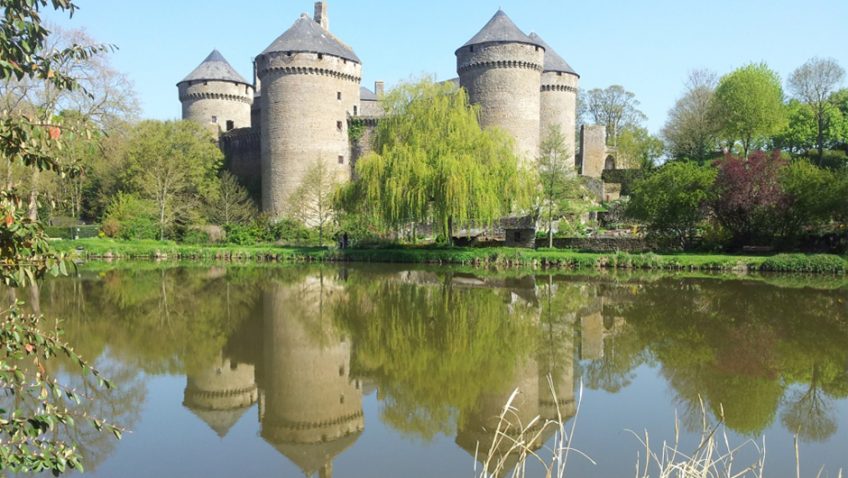 The charming flower filled French spa town of Bagnoles l’orne comes as a complete surprise to any unsuspecting tourist who has sailed from Portsmouth to Caen and driven along almost empty roads through quiet villages set in a largely undulating rural landscape.

Then a small roundabout crowned by a fountain and surrounded by Parisienne style cafes offering alfresco dining is reached.

Not far beyond, a beautiful tree lined lake with fluttering flags and a casino hove into view bordering the edge of a park where tourists stroll.

Bagnoles makes the ideal base from which to tour this quiet corner of rural France with its scattering of interesting towns crowned by magnificent medieval castles.

But on this expedition my wife Jenny and I concentrated not on these lovely historic old places like Laval, Fougeres and Vitre but on three hidden gems, namely the picturesque villages of Lassay Les Chateaux, Saint Suzanne and Sainte-Ceneri-le-Gerei.

I say ‘hidden gems’ because many of the villages one drives through while touring around this region are so sleepy that there is simply no one in sight.

Should it happen to be between noon and two, then the chances are that a good few of the inhabitants, either working or retired, will be crammed into one of the many auberges for lunch.

And with four courses, including wine or cider, for just eleven or twelve euros this one main dish of the day formula is extremely popular. With mostly meat on the menu, it’s all a bit discouraging for vegetarians although an omelette is often available on request.

Having made Bagnoles a base and spent the rest of the day soaking up the atmosphere of this charming spa town, it was time to set out on a small excursion to nearby Lassay les chateaux.

Here the welcome sign describes it as a ‘Petite cite de culture’ and with a magnificent lake side chateaux, said to be the oldest in continual family occupation in the whole of France, and lovely rose gardens just below the flower filled square, it certainly lives up to its name.

The chateaux is open to the public and is a focal point for a series of cultural activities throughout the summer including an extreme sports event with tightrope walking between its towers.

There are two ruined chateau close by and a delightful country walk has been devised linking all three of them for which a leaflet is available at the tourist information office.

If the sun is shining then a pleasant hour may be spent relaxing in the square with a glass or two and maybe munching a mini quiche or some other freshly baked snack from one of two boulangeries.

From Lassey, both the picturesque hill top village of Sainte Suzanne to the south and the quaint hamlet of Sainte-Ceneri-le-Gerei nestling on the banks of the wooded River Sarthe to the east, make delightful lazy day excursions.

The longer of the two, again along mostly empty roads through open country, also has the added benefit of including en route the Roman ruins at Jublains, itself another quiet village.

Here a stroll of just a few hundred yards down a track from the square suddenly opens out into a lovely view across the plains with a magnificent amphitheatre in the foreground.

In the silence one can almost hear the roar of the crowd drifting back across the centuries.

Soon Evron with its huge 13th Century Gothic basilica is reached and there is time for coffee in the square before heading on for lunch at one of the two restaurants in the heart of Sainte Suzanne.

This small medieval walled village full of lovely old buildings and quaint streets with a path meandering around its ramparts high above the surrounding country is a strollers delight just as long as one is blessed with fine weather.

While Sainte Suzanne sits on a hilltop, Sainte- Ceneri-le-Gerei is in a delightful area of wooded hills known as Les Alpes Mancelles and was our destination the following morning.

Its old stone bridge over the meandering river Sarthe, surrounded by a cluster of houses, must be one of the most photographed sights in the region.

The shot will have been taken from the 11th Century Romanesque Church of St Ceneri which stands on the hillside above and boasts some outstanding frescoes.

There is a large river side car park on lower ground just behind the hamlet and makes the ideal starting point for a short stroll along the river bank to a 15th century chapel.

From there one can walk up to the church and then down into the hamlet, hopefully for an alfresco lunch at one of its small but excellent restaurants.

We had one more precious day to spare so we drove from Bagnoles into the small town of Mayenne which shares its name with the wide river running beside it.

We marvelled at the small hydro electric systems installed at every lock along its tow path and wondered if we Brits were perhaps missing a trick.

The path runs for over 60 miles and is an ideal route for cycling holidays so maybe that was something to be considered for another year.

Bagnoles has a wide choice of restaurants and accommodation including the Bagnoles Hotel with its excellent Bistrot Gourmand.

Brittany Ferries offer a comprehensive programme of return sailings to Northern France from Portsmouth, Plymouth and Poole throughout the year.

We have been sailing from Portsmouth to Caen for some years and have always enjoyed an excellent service on the large and comfortable ferries Normandy and Mont St Michel.

“For further information on ferry travel, Brittany Ferries package holidays or to book a trip, please go to brittanyferries.com or call 0330 159 7000.”