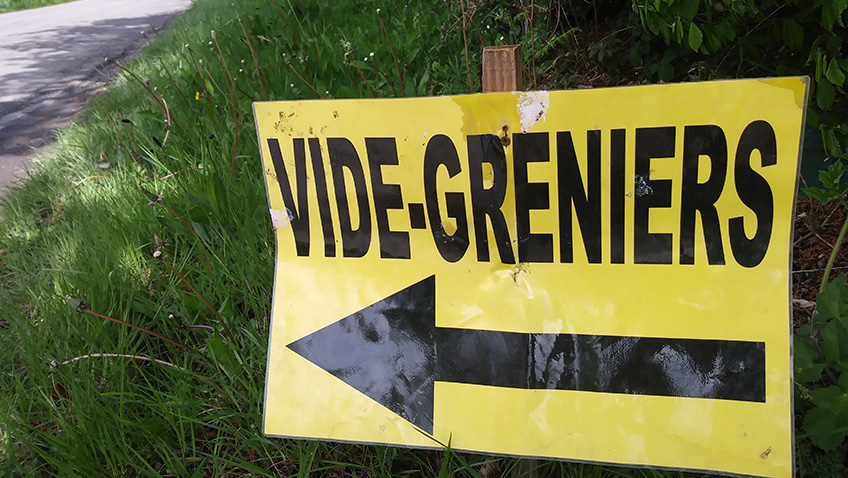 Nigel Heath seeks out a Vide-Grenier

There was an automatic quickening of the pulse the moment we spotted our first Vide-Greniers sign of the new season.

It was while my wife Jenny and I were passing through the small Normandy town of La Ferte-Mace on our oft travelled route from the ferry port at Caen Oustram to open up our house in the picturesque village of Lassay les Chateaux.

For like many frequent French holiday home Brits we are unashamedly hooked on attending Vide-Greniers.

These are the French answer to our yesteryear jumble sales or today’s car boot events when towns and villages all over France turn out the contents of their attics and erect hundreds of stalls in the street or a convenient field.

Car boot sales are fun but there is a special attraction in casting a roving and expectant eye over French cast offs.

For amidst the vast array of kids clothes and toys, electrical goods, small pieces of furniture and old tools one can often spot yesteryear terracotta wine jugs, colourful oil lamps, old box shaped coffee grinders and other items from days past. 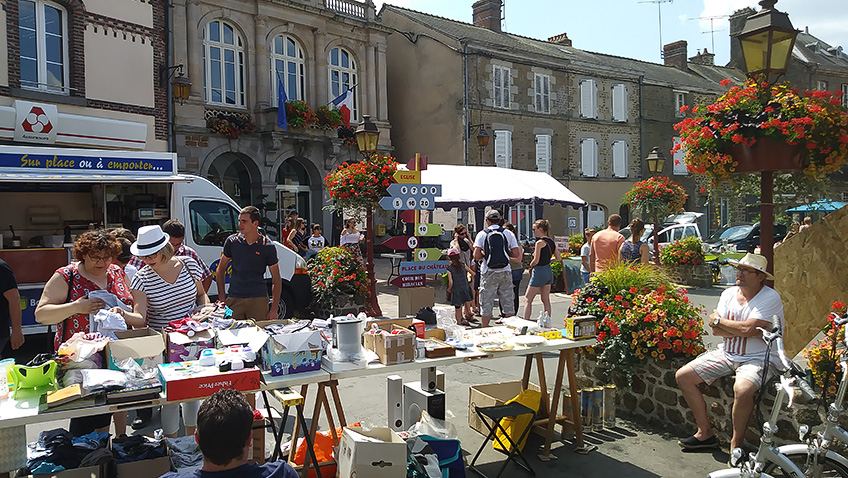 Driving through the attractive spa town of Bagnoles de L’orne with its lakeside casino, small hotels and hot therms and on nearing our journey’s, end we spotted a second enticing sign for that “Vide” being held that very Sunday in the village of Bellou-en-Holme.

It would be yet another place we’d never visited and only discovered by attending village “Vides” on drives along mostly deserted roads through the soft green and often wooded countryside in this quiet corner of Northern France.

Today was Friday and was spent in a frenzy of cleaning jobs because we’d closed up our three story town house in a quiet street behind the square in November and it was now nearing the end of April and the start of the Vide-Grenier or “empty attic” season.

On Saturday we returned to Bagnoles to visit the weekly market because Jenny wanted to replenish her stock of garlic cloves and to visit the Presse, or newsagents, to pick up a guide to all the “Vides” and Brocants in our region.

Brocants, which are established in shops, sheds and barns all over France, are a strange cross between antique and dusty junk shops and are an irresistible draw if we happen to spot one on our rovings and many’s the time we’ve made a u-turn on sailing past.

There’s one shed complex not far from Lassay which is so jam packed with stuff that one would need to cut a hole in the roof to extract an old car half buried at the back.

So now it was Sunday and we drove back to Ferte Mace, where we’d spotted that first Vide sign, and were soon heading for Bellou-en-Holme about eight or so miles away. 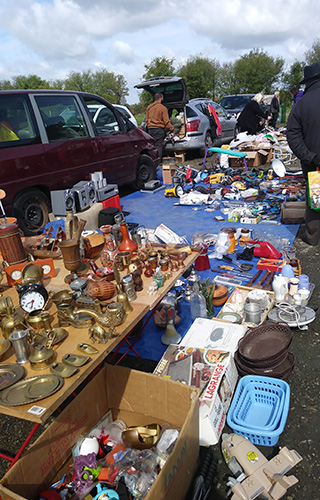 All seemed quiet as we drove up a deserted village street and began wondering fearfully if we’d made a mistake over the date but then thankfully we spotted a crowd in the square ahead and quickly pulled into a side road to find somewhere to park.

But alas these folks were not prospective bargain hunters like ourselves but worshippers leaving church after morning service and we’d driven right into the middle of a traffic jam.

It took a frustrating few minutes to extricate our battered red Ford Galaxy and to weave our way through narrow streets and out of the far side of the village with hopes fading fast.

But then thankfully we spotted another of those little Vide signs directing us along a country lane to a field packed with well over 150 stalls and better still there was also a Brocant in a barn on the site.

We left two hours later with a rich haul including a garden rake, two hoes and spade costing a grand total of eighteen euros and a nearly new enamelled cast iron cooking pot for eleven euros.

But the “find” of the day for me was an early French edition of Tintin in the Jungle, which cost five euros, to compliment the lovely framed poster I’d acquired at another Brocant a couple of years earlier.

While this Vide was very much a rural affair and the one held in our adopted village of Lassay is always held on July 14 as part of the Fete Nationale celebrations, some of them can take a whole day to walk around, like the ones staged in Bagnoles and La Ferte-Mace.

But the piece de la resistance must surely be the internationally famous one held in the northern French city of Lille which attracts around ten thousand stallholders and up to three million visitors over the first weekend in September.

While you’ll find a regional guide to the Vide-Greniers wherever you go in France, you can also view the information on line.

While Bagnoles de l’Orne makes an ideal base for exploring our little corner of France, limited accommodation can also be found in Lassay, our petite cite de caractere with its old square, rose garden and lakeside chateaux .

Lassay lies in a bowl of hills an hour and three quarters drive along quiet roads due south from the Caen Oustram ferry port served by Brittany Ferries.

The company offers a comprehensive programme of return sailings to Northern France from Portsmouth, Plymouth and Poole throughout the year.

For further information on ferry travel, Brittany Ferries package holidays or to book a trip, please go to brittanyferries.com or call 0330 159 7000.