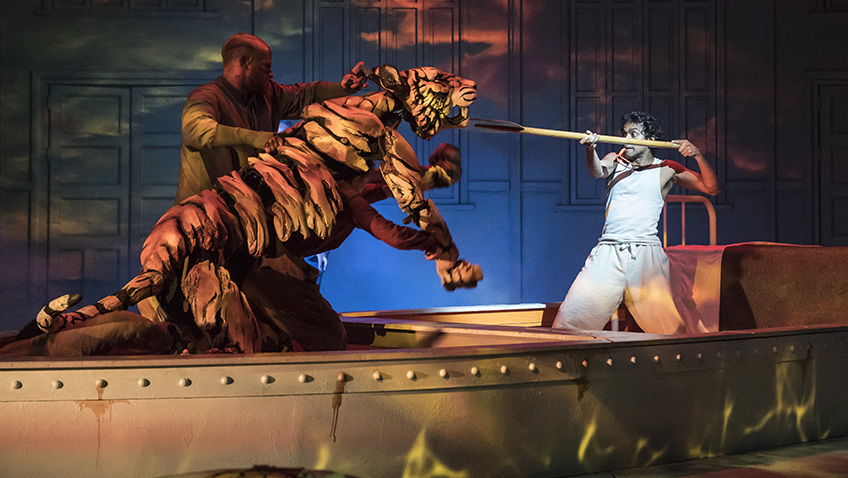 Regular theatre-goers may think they’ve seen it all over the years when it comes to great plays, beautiful sets, stunning effects and fine acting. Think again! They, too, will sit in wide-eyed wonder, alternately wreathed in smiles of warm delight, disbelief and admiration or brought close to tears of compassion by the Crucible’s Life of Pi.

Based on Yann Martel’s 2002 prize-winning novel

screens in 2012 by Ang Lee, this stage adaptation by Lolita Chakrabarti creates a belief in its magical characters, narrative and strings of impossible events that’s so strong, solid and overwhelming that we’re willingly swept along at every moment.

16 year old Piscine Molitor Patel, known as Pi, cast adrift on the Pacific for 227 perilous days with a large tiger, is apparently played by Hiran Abeysekera. So full of sparkle, life, passion and reality is his performance, though, that the audience remain fully convinced throughout that this is not an actor onstage at all but Pi himself! The other actors, too, embody 100% the characters they play, creating sturdy believability, warmth and humour. Mina Anwar is Pi’s strong, loving mother and Kammy Darweish his authoritative yet loving zoo-owner father, forced by political violence in 1970’s India to attempt to ship his family and entire zoo to Canada; Syreeta Kumar and Raj Ghatak are Pi’s caring, interesting, instructive aunt and uncle and Tara Divina his sister. Bringing humanity to their official roles as shipwreck investigators are David K.S.Tse and Gabby Wong, while Tom Espiner conjures up a fine naval officer, and Habib Nasib Nader adds burly menace to humour as the big French cook (and is the hallucinated voice, too, of a French-accented Richard Parker, tiger extraordinaire.) 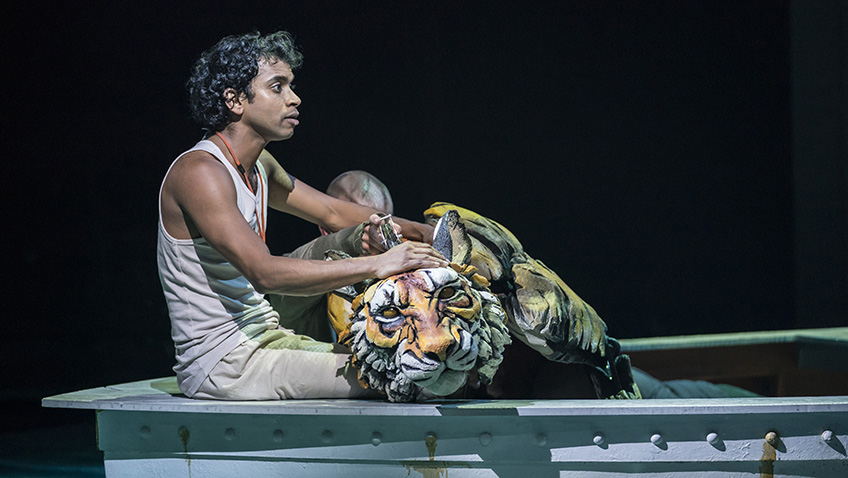 Hiran Abeysekera and Richard Parker in Life of Pi

in delivering the more thought-provoking themes, the ambiguity and the philosophical and allegorical elements of the work. Indeed the whole play shows that without belief we have nothing – a belief in love, in life and maybe in a God who embraces multiple religions – and it shows, too, that all life is interdependent and that humans are but one of the planet’s species that share raw animal instincts when it comes to survival. Well-paced, heart-warming humour is balanced with moments of terror and pain as flashback scenes, together with cleverly innovated props and scenery, flow effortlessly back and forth. And then… this excellence of script and acting is elevated to truly heavenly heights by stupendous combinations of set, lighting, puppetry, unbelievable effects, Max Webster’s direction, and by the Crucible theatre itself with its vast stage closely surrounded by audience.

Combined with its backdrop, the stage creates an ideal expanse for projection, while countless ingenious computations of its invisible moving parts and its hidden exits and constructions help create ebbs and flows – or torrents – of movement. As the storm rages, rain falls and water ‘pours’ so convincingly across the stage, audience feet almost move in response! When Pi disappears in a split second, then re-emerges through the floor that is the sea, it’s as astounding as the Terminator II effects of the late 80s. When the lifeboat emerges from below, out of nowhere, when the tiger, in blood-red glow, makes a cliff-hanging leap through the air; when animals devour one another and we discover puppet creations can have insides as well as outsides, we gasp. Thunder, lightning, clouds, stars as bright as fireflies and a raft, pulled by a rope as it gently turns on a moving piece of stage, add more magic as we travel from neat, sparse, handsome Mexican hospital to busy, bright Indian market and zoo, to embarkation aboard a ship soon to be thrown into a horrendous shipwreck that leaves Pi and various interactive animals adrift in a lifeboat. Eventually, only he and the tiger are left and his spiritual and practical sides are forced to co-exist as he fights for his own survival. 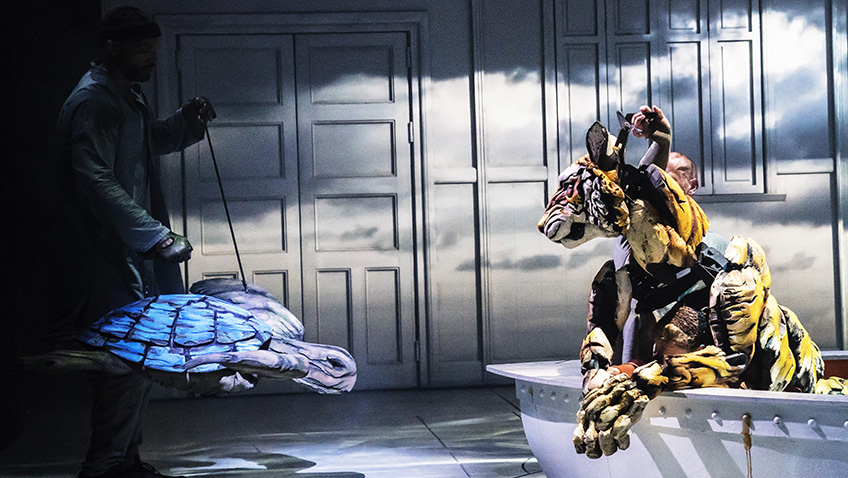 The animals, of course, as Pi knows, are what make the story good; without them, the story is too grim and gruesome. Onstage animals abound, from butterflies and shoals of fish to giraffe and soon-to-be-devoured goat. Stranded on the lifeboat are the ravenous, brutal hyena, the broken-legged zebra, the wiry orang-utan mother (now without her baby) and the mighty Royal Bengal tiger himself, Richard Parker, so named when a clerical error assigned him the name of his hunter. Acting with their own bodies, creating animal sounds, skilled puppeteers and cast members carefully manipulate the articulated beasts to move and respond like real animals as they come to life and interact. The tiger is especially magnificent and, towards the end, when Pi calls to Richard Parker ‘I love you!’ many hearts around the auditorium must whole-heartedly echo the sentiment. For what is life without belief! As the animal makes his way up the steps of the aisle how we long, like Pi, to call him back.

This being one of the most phenomenal, mind-blowing pieces of theatre you’ll see, anything but a full, spontaneous standing ovation would be unthinkable.

The show continues until July 20th