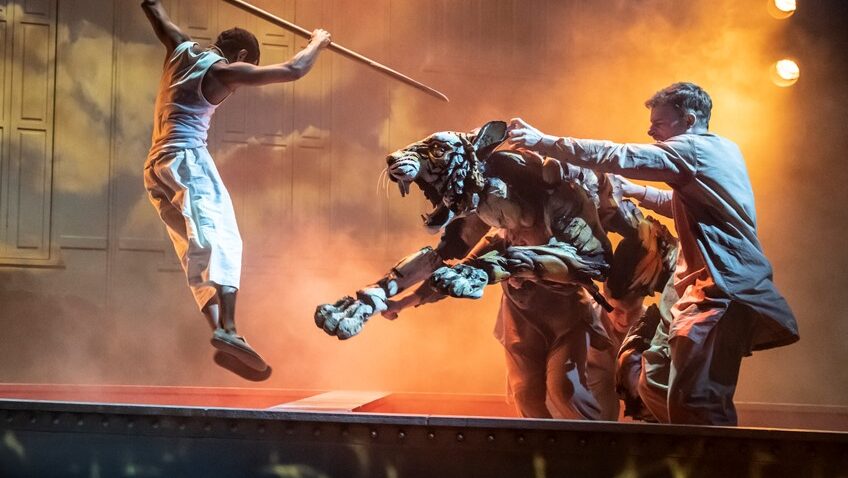 Lolita Chakrabati has adapted it for the stage. The play premiered in Sheffield in 2019. It has now arrived in the West End. Had it not been for Covid, it would have arrived sooner.

The production is brilliantly directed and designed. Max Webster is the director and Tim Hatley is the designer. The puppetry delights and amazes. Nick Barnes and Finn Caldwell are the puppet designers. Caldwell is also the puppet movement director.

Wyndham’s Theatre has been transformed. The stage’s curved prow juts out into the auditorium. The seats in the stalls have been raked.

The Life of Pi is the proof of God and the power of faith (Hindu, Christian and Islam). Hiran Abeysekera, very likeable, is well cast as 16-year-old Pi who is in hospital having survived a shipwreck. He was in a lifeboat in the Pacific Ocean for 227 days and his only companion was a Royal Bengal tiger called Richard Parker,

The roaring, ravenous tiger is awesome in his size and danger. Three puppeteers are involved: inside, outside and around. The movement, the agility, the confrontations and fights are exciting.

The power is in the story-telling. The extraordinary journey is both spiritual and real, dark and brutal. A key word is Danger. Pi struggles to survive. There are two stories. Which story will you prefer? The one with wild animals or the one with humans?

The stage management is brilliant. The transition from bare clinical hospital room to lifeboat and ocean, and the stage seemingly awash with water, is amazing in its speed.

Visually inventive and emotionally involving, I have no doubt that this puppetry-driven production will be seen all over the world and that it will appeal to audiences who enjoyed War Horse.