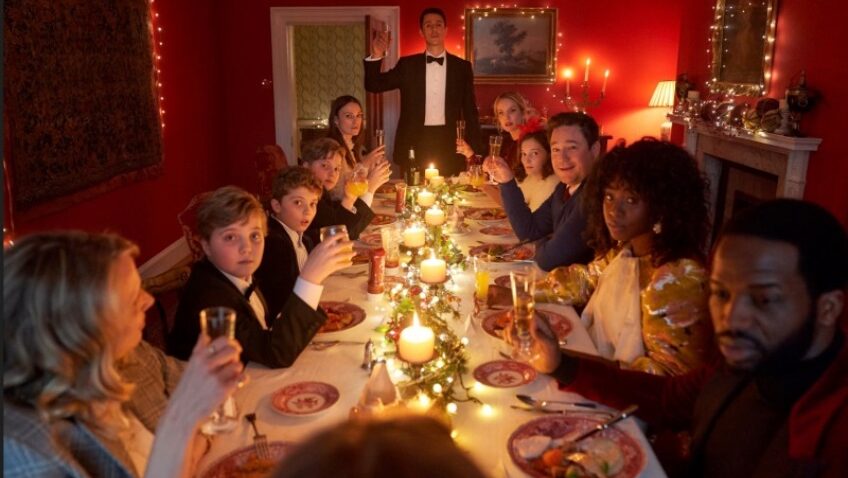 Prosperous, happy couple Nell (Keira Knightley) and Simon (Matthew Goode) and their three children are getting ready to welcome three other couples – their closest friends – and one child for Christmas at their isolated country house, brightly lit and decorated for festive cheer. Sounds like the setting for a Richard Curtis romcom or an Agatha Christie Whodunnit? Not quite.

Silent Night is a dark satirical comedy merged with an environmental apocalypse (“end of the world”) movie. In place of special effects, manic action and courageous heroes, Silent Night boasts squabbling, dysfunctional, families, made worse by death-bed confessions, trying to die with dignity. Due to a curious choice of endings, it has one of the most badly timed and distasteful messages of any film this year.

The government has issued a stark warning that a cloud of poisonous gas is sweeping across the country, and it is not only lethal if inhaled, but painfully so. Those who inhale it die a slow, agonising death. Toward this end, each person in the country has been issued one official Exit Pill. With Omicron foremost in our minds, you could be forgiven for believing the filmmakers want to equate the Exit Pill with the vaccine jab.

Of these, Alex (TV’s Killing Eve, Why Women Kill) and Sophie (the stunning actress/model daughter of Jonny Depp and Vanessa Paradis) are the outsiders, invited because of their spouses’ closeness to the hosts.

Due to her refusal to take the Exit Pill because of her pregnancy, Sophie forms a special bond with Nell and Simon’s precocious son Art (Roman Griffin Davis), who is the resident Doubting Thomas.

Sophie’s relationship with Art does not go down well with Nell, who tolerates the interaction until crunch time, when she turns fierce to protect her son. Here Keira Knightley gets to demonstrate, as she did in Official Secrets and Misbehaviour, that she is much more than a pretty face.

If you like your plots and characters with a little meat on the bone and your messages subtle, this is not the film for you. In all fairness, the plot and characterisations are less important than the dynamics of a group of middle-class friends (a careful balance of whites, two Black people, and two gays) and their children, coming to terms with the end of the world, or the UK.

Writer-director Camille Griffin, perhaps best known as the mother of Roman Griffin Davis, the star of the Oscar winning (Best Screenplay) Jojo Rabbit and this film’s co-star, has introduced us to her other two sons: adorable twins, Hardy Griffin Davis, playing Hardy, and Gilby Griffin Davis playing Thomas. You will note that their names “‘Art” and “Thomas” and “Hardy” suggest Nell and Simon are intellectuals. Though there is no evidence of that in the script Thomas Hardy was known for his books about social class injustice and tragic endings.

It is worth highlighting Griffin’s sons, as they appear in two of the film’s stand-out scenes. The first is the most convincing and poignant scene in the film where Art, upset and angry that his young life is being cut so short, and his father Simon, sit on the staircase and talk – about life and death. The other is at the very end when, to prolong the moment, the well-behaved twins object to their unevenly filled, warm glasses of Coca-Cola to wash down the pill. They send their father downstairs to address the criticisms. It is both very real moment, and a product placement ad.

Griffin is also making the point that children are politically aware and angry at their parents’ stewardship of the environment. The gas is either Russian chemical warfare gone wrong, or the result of environmental abuse. The causes are debated at the Christmas dinner table by two prepubescent guests, Art and Kitty with Kitty blaming the Russians. Both are anti-authoritarian, but Art in particular seems to have adopted the Vietnam War protesters’ slogan, “question authority.”

It is the questioning of the government’s advice about taking the irreversible pills and the notion that everyone will die, that bothers sceptical Art in particular. If you do not make the connection between the Exit Pill and the vaccine, how else do you explain certain characters’ mistrust of the government, and why Nell and Simon watch Nell’s mother – quarantined in her house – die alone? And Exit Pill is one vowel away from exit poll, suggesting a political context: people might be proxy voting with their decision to take the pill or not.

The fate of Art, whom we are meant to identify with and sympathise with, is what will leave many audiences not only confused, but disturbed at what can only be explained as an antivax message. It doesn’t help that those who follow the government’s advice are such unpleasant or uninteresting characters that you kind of which they had taken the pills 100 minutes earlier.