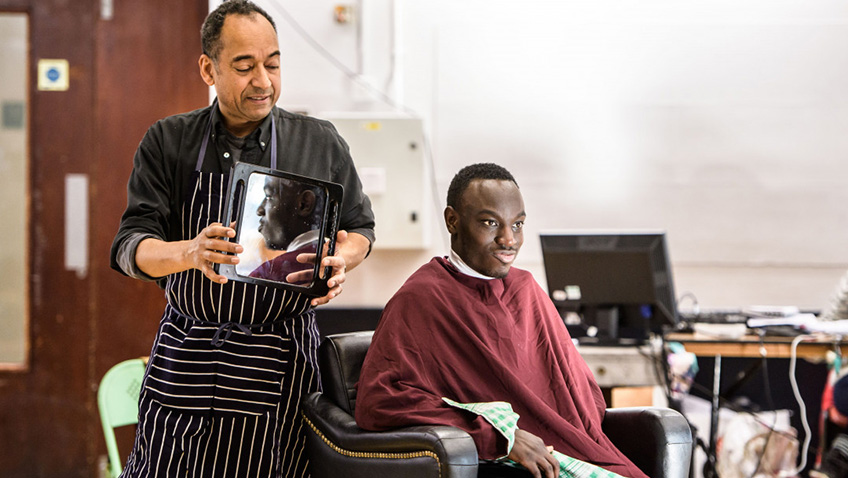 With superb acting, super-superb stagecraft and an overall atmosphere of sunny joy, Barber Shop Chronicles bowls over audiences everywhere. As Inua Ellams’ play takes us on its buoyant, cleverly crafted journey, the script is heaped with hilarity, dotted with touching tragedy and has a hundred thoughtful, insightful things to say.

Seeing barbers’ shops the world over as special spaces where diverse men come together and often speak more freely than anywhere else, Ellams went off from London’s Little Lagos (Peckham) to do research and recordings in South Africa, Kenya, Uganda, Nigeria and Ghana. Now his play takes the audience, too, on that very journey to hear the banter, gossip, jokes, advice, intimate confessions, threats, arguments, anecdotes and slices of personal life that burst from thirty vibrant, very real characters, played by a dozen amazingly talented actors. 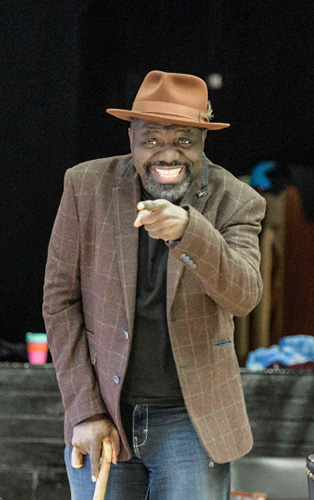 The atmosphere created by Rae Smith’s stage design is so spot-on it sets the audience right inside these barbers’ shops that sit in humble glory on the thrust stage. On high, the profusion of looping, straggling, dangling cables that spread from rough wooden poles like a giant spider’s web evoke perfectly these poorer locations, as do the lonely ceiling fan and the host of various hand-made shop signs. On the stone floor, the assorted tatty chairs, old generator and radio, small mattress and battered cupboards, cluttered with jumble, can all be reconfigured in a busy flash.

As scenes travel back and forth between the six locations and cultures, clever links and connections build via a running joke about a fly, the globalising influence of a big football match and of London itself, and the universal problems of personal relationships. As an outstanding bonus, each and every one of the many scene changes is made into a dynamic, uplifting entertainment all in its own right. As a large wire globe turns, the new destination lights up and the spider’s web cables glow magical silver or gold, or in beautiful multi-coloured illumination. Beneath, the actors break into fabulous renditions of appropriate native chants or songs as they dance the props here, there and everywhere in amazing choreographies of movement. Costume changes, too, are rapid, frequent and flawless, outfits appearing in infinite varieties of flamboyant or disheveled diversity, with jumble-sale capes a-plenty to be swirled. Some actors play 2, 3 or more characters, each as real and as magically engaging as his last, changing accents (so hone your ears!) along with clothes and demeanor and interacting in varying numbers as characters come and go in the busy shops or sit waiting around in them.

Even before the show proper begins, the actors create a party atmosphere, dancing joyfully to loud music and inviting audience members to step right in for a “haircut”. But over the 105 minutes, interspersed with the comedy and merriment, intriguing personal stories of heartache gradually evolve. Views crop up, too, from refreshing new angles, as characters, sometimes biased, troubled or bitter, discuss past and present relationships between blacks and whites, between men and women, or fathers and sons, or argue on other universal themes like money, identity and politics – Mugabe, Nelson and Winnie Mandela, the decline of Nigerian Pidgin, whether offence or pride should be taken in certain words.