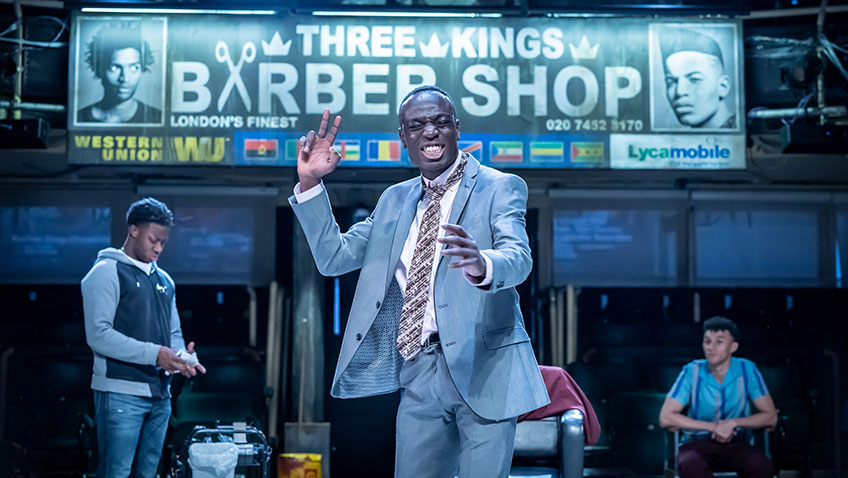 Inua Ellams’ Barber Shop Chronicles, a co-production between the National Theatre, Fuel and Leeds Playhouse, directed by Bijan Sheibani, premiered at the National’s Dorfman Theatre in 2017 to critical and popular success. 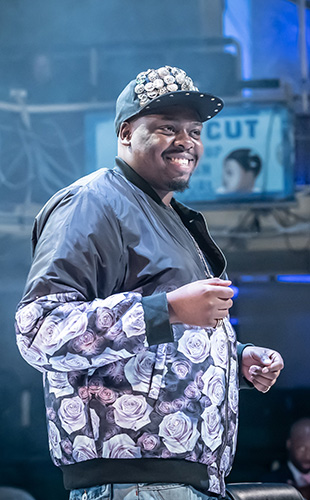 Entering the auditorium the actors are found to be already on stage mixing with the audience and inviting them to have pretend hair-cuts and pose for selfies. The performance is scheduled to begin at 8 PM, but irritatingly the cast continue to mill around for another ten minutes.

Enua Ellams is a Nigerian playwright and poet. He travelled to Africa and came back with 60 hours of interviews. Initially, he was going to write poems. Instead he wrote short dialogues.

For generations African men have gathered in barber shops to chat and debate. They talk politics, praising Mugabe and lambasting Mandela. They argue whether it is better to date a white or a black woman. They discuss linguistic problems and the use of the N-Word and Pidgin English.

Masculinity is a major factor. A young man on the cusp of manhood is worried about his sexuality and what it means to be a black man.

There are exuberant transition scenes with the cast racing round the stage at speed, dragging caster chairs with them. They sing a bit, they dance a bit and they brandish their barber towels as if they were Toreador capes.

A major problem for the show is the actors’ diction and the Roundhouse acoustics. A lot of what is being said is lost in the huge auditorium.

Following its six-weeks run at the Roundhouse, Barber Shop Chronicles will tour the UK and can be seen in Birmingham, Oxford, Inverness, Edinburgh, Southampton and Leeds.