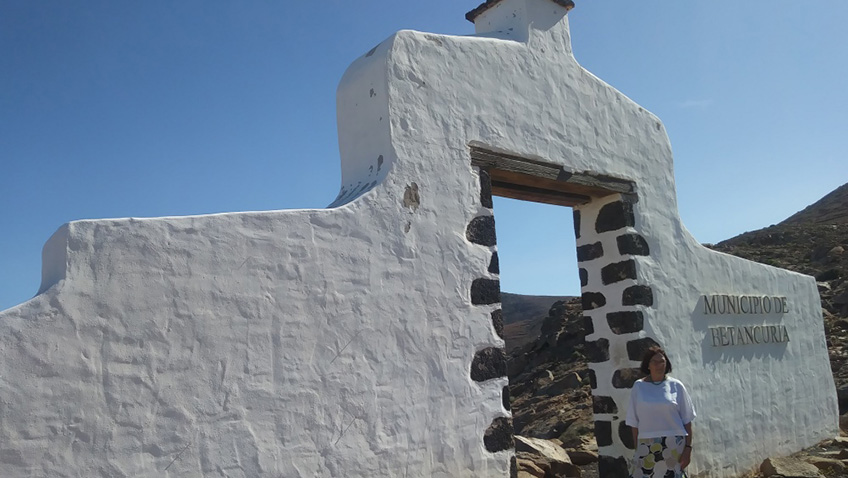 Oh what a contrast. We’d suddenly swapped a cold, wet and windswept UK, still recovering in the aftermath of Storm Eric, for a warm desert-like landscape and it had only taken a three hours and twenty minute flight!

Now my wife Jenny and I were enjoying the view as our chauffer driven car sped towards a stunning pink sunset with the black silhouettes of distant jagged peaks all around.

Just over an hour later we were gazing out from our balcony of the Hotel Occidental Jandia Playa overlooking the Atlantic in the far south of Fuerteventura, the second largest of the Canary Islands.

Below, and standing out from the silky warm darkness, was an illuminated scene of palm trees and swimming pools where chilling out was to be the priority for the following day.

Then it was time to go off and explore Fuerteventura, which, with its near neighbour Lanzarote, is the most desert like of the Canary Islands archipelago 620 miles from Spain and some 70 miles from Morocco.

For by the time the moisture bearing Atlantic Trade Winds have passed over the more mountainous islands of Tenerife and Gran Canaria there is precious little rain left for Fuerteventura.

So with a year-round temperate climate and over 150 beaches, many of golden sand lapped by turquoise waters because of the shallow coastal shelf, this makes a perfect year-round retreat for those of us from northern climes.

We were staying close to the former fishing village and now busy tourist resort of Morro Jable in the middle of the Jandia Peninsular, which forms the toe of Fuerteventura, so now it was time to drive back up the coastal highway to explore the southern half of the island.

Soon we turned inland and headed for Betancuria, the old capital and said to be a green oasis high in the central hills.

A winding drive brought us up to a magnificent viewpoint overlooking a truly wild and biblical landscape used in the making of films including Exodus and Star Wars.

But why was there also an impressive stone gateway, seemingly in the middle of nowhere, and a sign asking us not to feed the squirrels when there wasn’t a tree for miles around?

The gateway, our guide explained, was one of the many marking the entrance and exit to the island’s six municipalities.

“And what about the squirrels?” I asked as one obligingly hopped onto a nearby wall and seemed to wink knowingly at me.

These, we were told, were Barberry Squirrels introduced by accident from North Africa in 1965 and because they had no predators, there were now millions of them all over the island.

They looked like cute Chipmunks but they ate almost anything, including all the succulents and small plants that struggled to grow in the arid environment.

Next stop was the village of Vega del Rio Palmas with a palm fringed square and a small church with twin bells in its mini tower.

There were few people about but on the third Saturday in September as many as 15,000 pilgrims came from all over the island because the church was home to a statue of The Pene Virgin, the island’s patron saint, we were told.

Now nearing Betancuria and guarding its pass and the spectacular Morro Velosa viewpoint, we came upon the massive bronze statues of brother Kings Ayos and Guise who were said to have each ruled half the island in ancient times.

Betancuria, when we reached it, was indeed a green oasis because of a high water table. It became the island’s capital because of its relative safety in the centre of the island but that came to an end when Barberry pirates from North Africa eventually overcame its natural defences and sacked it back in 1539.

Today’s invaders are tourists content to wander around its quaint and flower filled streets and visit the local bars and restaurants but what really captured our attention was the Pensioners’ Play Park next door to the one for village children!

Here we found “play” equipment specifically designed for gently exercising elderly limbs and there was even one for exercising potentially arthritic fingers. This park was by no means unique as there were similar ones in communities all over the island, we learned.

Growing crops in an arid environment has certainly proved a challenge for islanders but the introduction of a little H20 works wonders as was evidenced by the year round production of tomatoes under covered areas like little patchworks in the landscape.

Also suited to the environment is the growing of cactus like Aloe Vera plants and a number of small family run units have sprung up across the island producing the heath giving oil and using it in creams, soaps and drinks for export.

Some enterprising farmers have even found a hybrid olive tree that will withstand Fuerteventura’s year round winds and have even started producing olive oil which we sampled on our tour.

Until quite recently goats outnumbered the islands circa 103,000 population and indeed Puerto del Rosario, the capital since 1860 was formerly known as Goat Port because of the breeding of the animals in the area.

Understandably the production of goats cheese is a major enterprise and we sampled fried cheese with honey and almonds, a particular delicacy, in a little restaurant by the ocean when our guide dropped us off for a late lunch in Morro Jable at the end of our tour.

I knew that the memory of our stroll back to our hotel along the sand beside the sparkling sea and those along the beach on subsequent mornings would be held in my mind’s eye long after the golden grains had drained inexorably from our holiday hour glass. 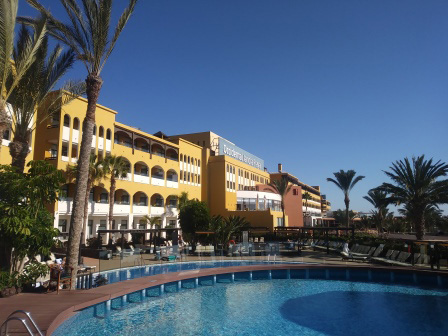 The Hotel Occidental Jandia Playa, a short walk down through palm and flower filled gardens to the road accessing the beach, offers guests the best of both worlds.

While its upper Royal terrace area is for guests seeking a more exclusive experience in a tranquil setting, there is also an excellent range of family accommodation and holiday facilities with cuisine to suit all tastes.

Nigel Heath was hosted at the Hotel Occidental Jandia Playa and was a guest of Classic Collection Holidays (0800 008 7288) who have been tailor-making luxury hotel holidays for more than 30 years.