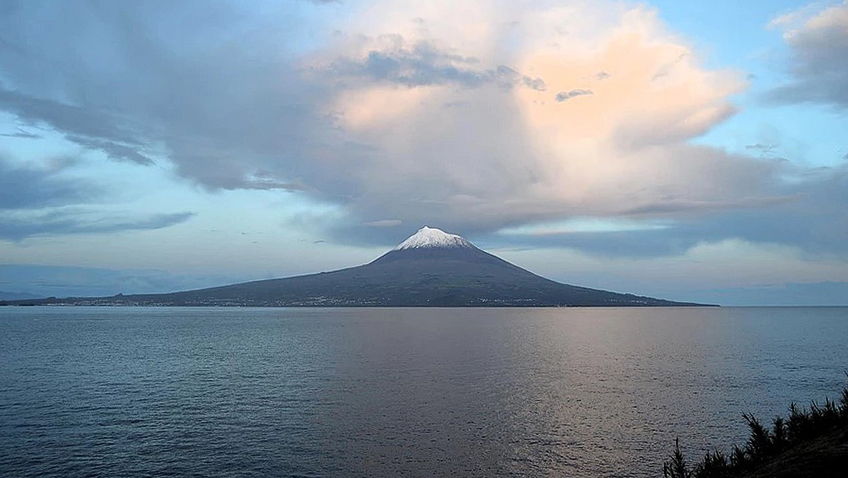 I had always wanted to visit the Azores, an archipelago of nine Portuguese islands out in the Atlantic, ever since schoolboy days when my English teacher asked us to read Alfred Lord Tennyson’s The Revenge, a wonderful poem of swashbuckling daring do.

This ballad tells the stirring story of how a valiant British Captain refused to flee from a mighty Spanish fleet when he had ninety men lying sick ashore so chose to stay and fight instead of withdrawing with the other six English man of war.

The first line: ‘At Flores in the Azores Sir Richard Grenville lay’ has remained lodged close to the surface of my memory for a lifetime so when the opportunity arose to voyage to the Azores and also Madeira on Fred Olsen’s classic cruise ship Black Watch, it could not be missed.

It wasn’t Flores in the Azores that slowly rose above the horizon on our fourth day at sea but the mighty volcanic peak of Pico Alta on Pico Island, which at 2,352 metres is the highest in Portugal.

Here on this second largest and most southerly island in the group, around 15,000 islanders mainly concentrate on the production of fruit, vegetables and vines on small terraced fields near the coast.

For some reason I’d always imagined the volcanic Azores to be rather barren and just a little inhospitable but how wrong I was for they are mostly green and temperate which became totally apparent when we docked at picturesque Horta on the nearby island of Faial.

Here my wife Jenny and I were picked up in a jeep and taken to the nearby botanical gardens by Naturalist, Science and Tourism, who offer small group tours of this lovely island and we spent a most memorable and informative day with them visiting its long extinct giant Caldeira or crater and other dramatic volcanic sites.

Naturalist is a start-up from the University of Lisbon and is a unique enterprise linking science and tourism. It is staffed by biologists and researchers who use tourism as a platform for research. 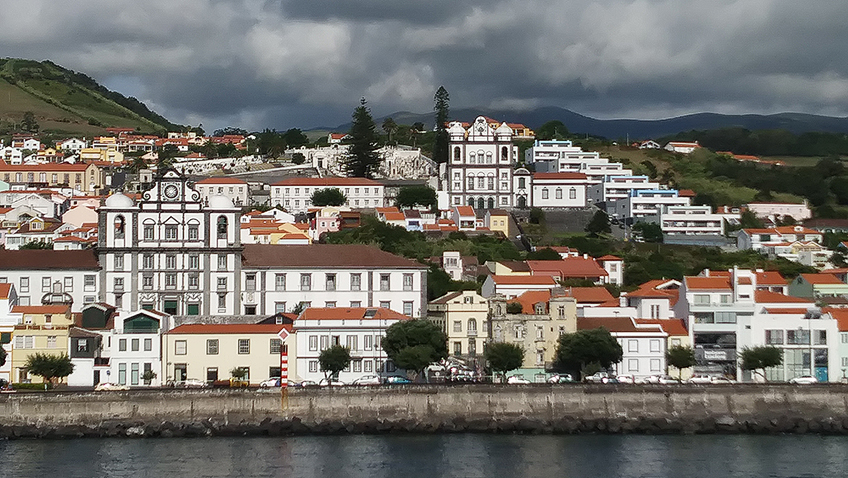 While the capital Horta is the liveliest and most cosmopolitan in the archipelago, possibly influenced by its large yacht harbour, Faial itself is also known as the Blue Island because of its many hydrangea hedges.

Overnight we sailed on to Ponta Delgada on San Miguel, the largest island in the group, famous for its volcanic scenery, rich marine life and twin crater lakes of Sete Cidades.

Here we chose a tour to the more remote Furnas Valley with its picturesque and easternmost of the island’s three spectacular caldera lakes, tropical gardens and nearby geothermal complex of hot springs, before returning to the ship.

So ended our brief encounter with these enchanting islands but they are now firmly at the top of the list for a return visit when hopefully we will finally set foot on ‘ Flores in the Azores.’

This most western island in the archipelago is actually lying on the American continental shelf and is aptly called Flores because of its myriad of flowers and plants, many seeded by birds migrating from Florida. 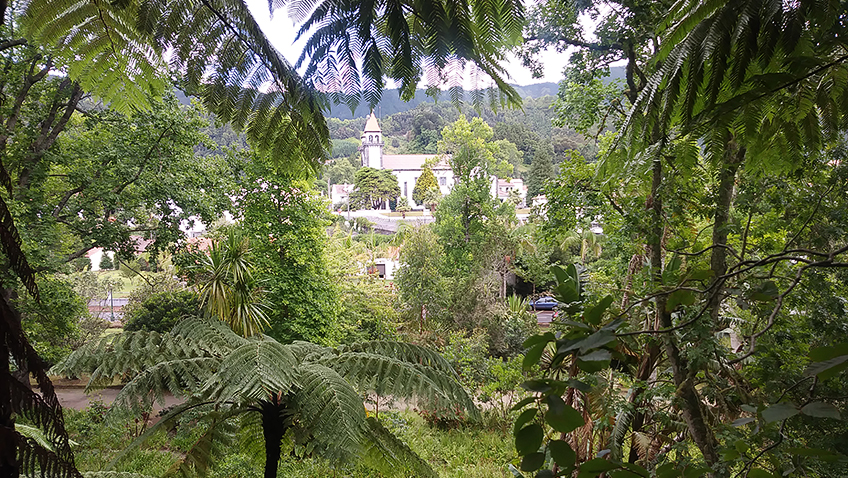 Now we were sailing on to the mountainous holiday island of Madeira, a favourite winter sun and year-round holiday destination for Brits, many of whose first encounter is as passengers on one of the many cruise ships calling at its buzzing port capital of Funchal.

We’d previously flown to Madeira in March when we’d ascended by cable car to tour its spectacular Monte Palace Botanical Gardens and also its less visited English country estate style Palheiro gardens but now we were on a special mission.

For our last drive into the island’s spectacular mountainous interior had been marred by low cloud, mist and drizzle but now the morning skies were blue and we’d arranged a special excursion with Hit The Road Tours, who organise tailor made 4×4 jeep excursions and off the beaten track guided walks.

Their guide Jazz picked us up from the Funchal Cruise Terminal in a bright orange Land Rover and drove us into town to pick up a picnic before heading off into the mountains where we stopped for a magnificent view over the remote Nun’s Valley,

This secluded spot, surrounded by mountains, is home to the Santa Clara Convent founded by nuns escaping pirates who raided Funchal back in 1566. 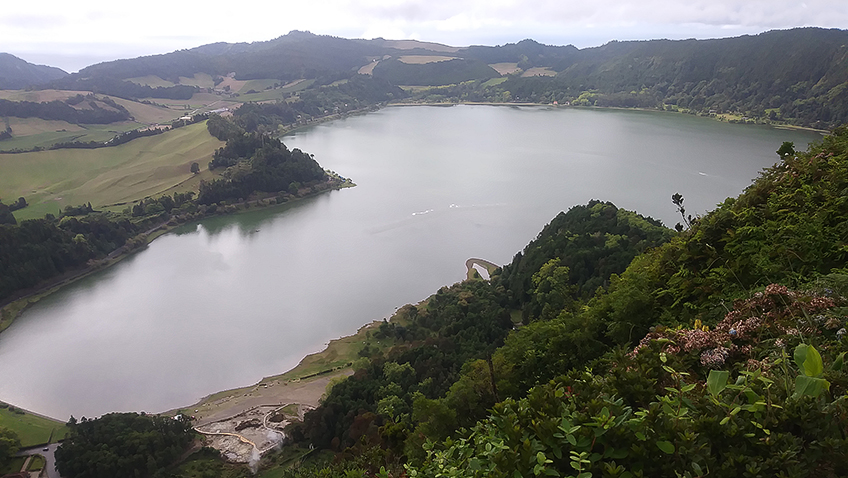 From here we steadily climbed over 1500 metres for a host of more stunning mountain views before descending on quiet mountain roads and some forest tracks through forests to the charming village of Porta da Cruz on the north east coast for our picnic and a visit Europe’s only remaining steam driven rum distillery.

But on the way down we took a walk along one of Madeira’s famous Levada water channels, introduced in the 18th century as a means of irrigating the hundreds of man- made vegetable and fruit growing terraces clinging to the mountainous terrain.

The finale to our wonderful day was a final stop at a viewpoint overlooking Funchal where we could see our cruise ship, Black Watch, anchored far off in the harbour below.

With frequent flights available from a number of UK airports, a visit to Madeira is quite easily arranged and for those wanting a small tailor made tour with an excellent lunch then visit http://www.hittheroadmadeira.com/ and https://www.facebook.com/gobrunch/

Direct flights are available from the UK to the Azores but travellers would need to take a five week break or several two week holidays to visit all nine of these remote islands via ferry and internal flight links.

Those preferring this option can check out the website of Naturalist Science and Tourism for on island tours.

Our visit to the Azores and Madeira was made possible as guest of Fred Olsen Cruises www.fredolsencruises.com