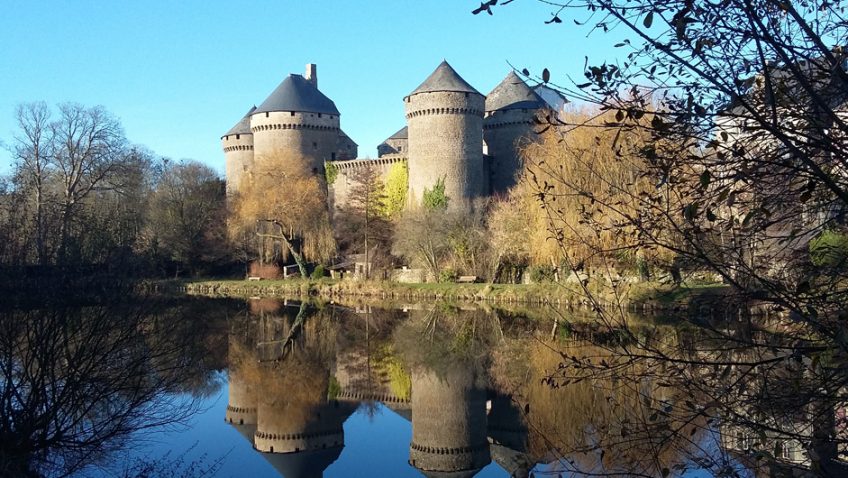 I was really looking forward to our pre Christmas arrival in picturesque Lassay les Chateaux,  a petite cite de Caractere,’ nestling amid rolling hills on a plateaux ninety minutes drive south from Caen.

My wife Jenny and I had slept our way from Portsmouth to France on an overnight ferry and were now drawing close to journeys end but at reduced speed because of dense patches of early morning mist.

Still, the ghostly moisture was creating an ethereal festive glow around the vivid reds, greens, golds and ice blue decorations above many of the shops we had passed in sleepy villages along the way.

The distinctive way that French shopkeepers festoon the top of their windows with large ribbons and bows and other such decorations was one of the small features we had noticed since buying our little house behind the square in Lassay eight years ago.

But reaching Lassay was not our first priority that morning because, as it was Saturday, we knew the market would be setting up in the small lakeside spa town of Bagnoles de L’orne. Besides stocking up on bunches of garlic and looking for one or two Christmas presents, to take home, it would also be good to see how the town measured up in the festive decoration stakes and we were not disappointed.

For the large fountain on the roundabout  at the entrance to the town was festooned with curved strings of white lights creating the illusion of silvery jets of water while all the lamp posts were hung with giant decorative balls.

But a disappointment was in store when having visited the market and patronised the garlic man’s stall and bought some excellent fish pate for lunch, we completed the short drive in to Lassay.

Centrepiece of the festive display in front of the Town Hall has always been an illuminated coach like the one Cinderella might well have taken to the ball.

But where was the horse which stood between its shafts?  It was nowhere to be seen and we later learned the terrible truth from our neighbour Dominic that after years of loyal service poor old Dobbin Gray, as we might have called him, had simply disintegrated and faded away.

Early the following morning when I walked out to buy croissants from the boulangeri, I took my camera to picture one of the two brilliant blue festive shooting stars I had noticed in the square the previous evening.

But the very moment that I raised my camera, all the Christmas illuminations switched off automatically. My friend The Cosmic Joker struck yet again a couple of hours later after we had decided to make the forty minute cross country drive to visit a Christmas Market in the picturesque medieval hill top village of Saint Suzanne.

On the last leg of the journey we were suddenly confronted by an ominous ‘Route Bare’ sign.

The road would be closed in seven kilometers we were informed and judging from previous experiences, the deviation route would cater for lorries and not cars and could therefore go on for miles.

“Just our luck,” I hissed to Jenny but then a thought struck me. Maybe the road ahead was closed because of the market and so, after a few tense minutes, it turned out to be.

Sainte Suzanne with its centuries old buildings and tiny streets is a real gem to explore at any time of the year but this was our first festive visit.

Its tiny central square was surrounded by stalls selling sweet or savoury crepes, mulled wine and other festive fare while chestnuts roasting on an open fire reminded me of a famous Christmas song.

Our pre Christmas visits to Lassay to close the house up until the spring, are always short so we decided to spend our third and final free day on a ninety minute drive east to Le Mans which, strange to say, we had never visited despite its motor racing fame.

Following guide book instructions, we headed for Centre Ville and found a space in a church car park north of the River Sarthe. From there it was a five minute walk via a busy road bridge and a series of steps to gain the medieval old town dominated by the magnificent Romanesque St Julien’s Cathedral.

Here, festive decorations were thin on the ground but the ancient buildings and maze of cobbled streets more than made up for it.

We lunched in a tiny bistro where our only fellow diner was a Parisian whom we had spotted taking pictures of the giant stained glass windows in the cathedral. They dated back 900 years and were some of the finest in France, he told us.

Then we detoured home through the undulating and wooded Alps Mancelles especially to visit a salvage yard where we had often picked up treasures, including lovely old tiles and pots.

We were sure the larger than life trilby hat wearing owner would be open on a Tuesday afternoon but alas he was closed so my Cosmic Joker had struck again.

Look up market days to add to the enjoyment

We have been sailing from Portsmouth to Caen for some years and have always enjoyed an excellent service on Brittany Ferries’ large and comfortable ships Normandy and Mont St Michel.

The company offer a comprehensive programme of return sailings to Northern France from Portsmouth, Plymouth and Poole throughout the year.

“For further information on ferry travel, Brittany Ferries package holidays or to book a trip, please go to brittanyferries.com or call 0330 159 7000.