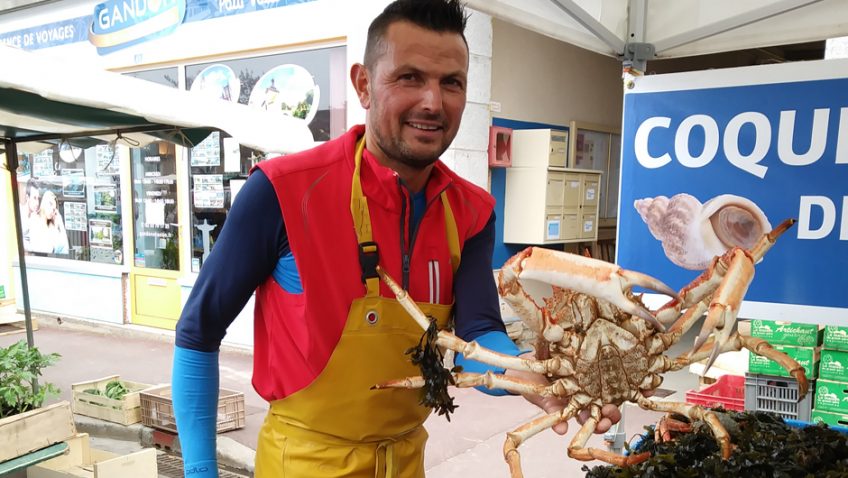 One has two choices when visiting a bustling French market in a large town some miles from one’s holiday gite, hotel or B&B and they are either to rise early and beat the traffic and the descending hoards, or to remain in relaxed vacation mode and arrive in the fullness of time. Well not quite in the fullness of time because most markets that blanket an entire town centre soon after dawn, finish promptly at noon or thereabouts.

Magically within an hour or so the arriving tourist would never have known they had been there except maybe for the odd “Route Bare’ metal barricades pushed aside and waiting for council workmen in their florescent green overalls to come and take them away.

Having gone to bed with the firm intention of rising early, reality took over and my wife Jenny and I found ourselves driving in to the Normandy peninsula town of St Hilaire-do-Harcouet around 10am, just about the worst possible time!

Now began a sort of Russian roulette as we followed the signs for Centreville and caught our first sight of local folk hurrying forth determined and Pied Piper like, baskets in hand.

There were still the odd parking bays so should we stop here and follow the crowd or go just a little further? Too late, we’d missed that opportunity and with a crawling crocodile of cars now backing up behind us there was no chance of a reverse manoeuvre. “There’s another space,” cried Jenny but too late because the driver in front had spotted it and the next thing we knew we were approaching the packed town centre and looking wildly around for an escape route.

Luckily there was a large but packed car park on the left in front of the church so we spent the next few minutes trawling slowly up and down the rows until thankfully we spotted a space.

The first stall we came across on the edge of the car park, contained dozens of ducklings and hens cheeping and chirping as an elderly gent filled a large ventilated box.

He was very gentle with the fluffy yellow little creatures but oops he dropped one and in a moment the youngster was scuttling off under the stall with its lady owner in hot pursuit.

Now we left this comparatively quiet backwater and cast ourselves off into the slow moving throng of humanity flowing through the banks of stalls only to find ourselves in the midst of an eighty strong English school party.

They turned out to be from Hugh Sexey Middle School in Cheddar on tour and bound for Le Mont Saint- Michel on the nearby southern Normandy coast the following day.

What would the French do without their bread baked every single morning in boulangeries in every town and thousands of villages throughout the land – there was mountains of it for sale in this market. We didn’t need a loaf but we were tempted by a large pain au raison to eat when we finally took refuge outside one of the cafes dotted around the town centre.

That was one of the many aspects of French life that we liked in that one could sit outside a cafe with a coffee or beer and munch through food bought off the premises without le patron turning a hair. And on the subject of hair, our attention was then taken by a stall displaying hundreds of hats and Jenny’s eagle eyes zoned in on an elegant little summer number, just perfect for gardening.

She picked it up and examined its label. “But it’s made of paper,” she declared. “Yes but it does look nice?” I replied as she tried it on to an encouraging patter from the stallholder.

To our surprise it was only five euro so she popped it into her basket to join the pain au raison.

When one is in holiday mode and starts buying things in French markets it can be a little like a flood gate suddenly opening and before you know it you are looking wildly around for a cash machine to pay for lunch.

But we just managed to resisted the temptations offered by an enthusiastic lopper man who willingly demonstrated the benefits of buying his superb gardening equipment and went on to watch a cane chair weaver at work and to sample some pretty strong calvados that left us both feeling momentarily light headed. Two other markets worth visiting in this corner of France are in the small city of Laval and the much more intimate lakeside spa town of Bagnoles Del Lorne, both held on Saturdays.

While the Laval market, held amid medieval splendour close to the upper ramparts of the city, includes a tree lined area designated for locals to display their produce, the Bagnole market occupies a site at the upper entrance to the town with excellent car parking close by.

But returning to the St Hilaire market, which incidentally is held on a Wednesday, we soon came across the fish stalls. Here the gleaming and often exotic fruits de la mer were attracting crowds of visitors as well as locals out trawling for their suppers.

Before we left the market I spotted the friendly teacher I had spoken to with two of her colleagues who had clearly given all their ducklings some free time to roam.

We based ourselves in Bagnoles de Lorne, which is only 90 minutes from the Caen-Oustram car ferry terminal used by Brittany Ferries who offer a comprehensive programme of return sailings to Northern France from Portsmouth, Plymouth and Poole throughout the year.

For further information on ferry travel, Brittany Ferries package holidays or to book a trip, please go to brittanyferries.com or call 0330 159 7000.”