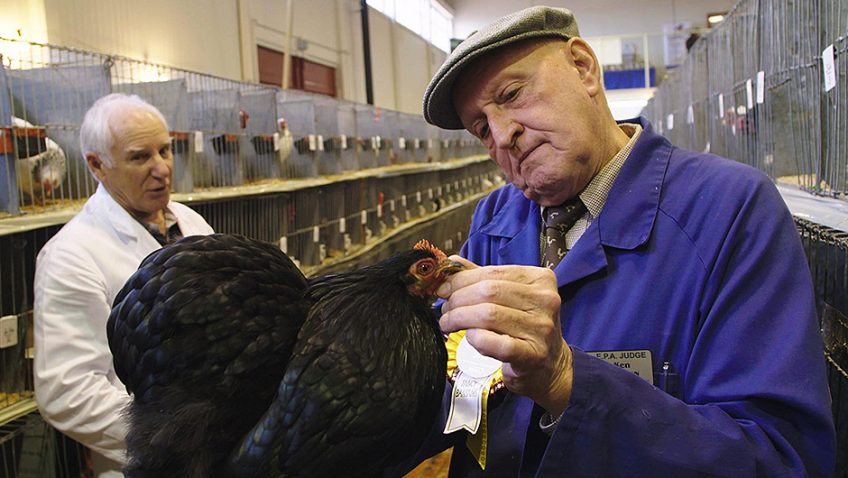 For a while, Slavko Martinov’s ‘flockumentary’ on the curious obsession of chicken breeding and showing is a surreal hoot and the New Zealand characters who compare their past time to alcoholism, are a novelty act that you watch with a mix of bemusement and fascination. But after a while the punning captions; twangy, hillbilly music; and lifeless scenes inside the Christchurch Poultry Club meetings grow tiresome. More time spent with the breeders and more information about what the judges are looking at would help us care a bit about the results of the National Show. We are told that every year chicken breeders from all over New Zealand enter the world of competitive poultry pageantry, hell-bent on victory at the National Show.

During the rest of the show we meet a selection of these breeders and hear from them about their birds, how they got started and their chances of winning, but, with the exception of Brian Glassey, very little about their personal lives and sacrifices. This anonymity makes it difficult for us to care about their success or failure, particularly when it’s impossible to follow which bird or birds they will be entering.

This is not Martinov’s fault. As Ian Selby, who wrote and compiled the Third Edition of the Poultry Standard Book, tells us, holding up the sleep-inducing breeder’s bible, the book ‘is something everyone should have.’ He warns breeders not to do anything before reading the first 60 pages of the reference book and contends that judges who make a mistake have not read the book.

Wayne Dodd, two-time National Champion Best Bird in Show, ‘consistently puts top birds on the bench,’ but we spend so little time with him that there is no suspense about whether he will make it a hat trick. Brian Glassey with his toothless grin does not sound like he takes his passion seriously as he’s always chuckling, even when he finds a dead chick on the ground, or trims a beak too close and draws blood. He started breeding Barred Plymouth Rock (an old New England breed) when he was 18 – ‘50 years ago, about that’, he says. He sleeps four hours a night and admits that he’s too busy to think about relationships and ‘what woman would have me?’

I cannot quite decide if he’s making a mockumentary in the fashion of Christopher Guest’s Best in Show, or an informative documentary about likeable, sincere and hard working people who take their chicken shows very seriously.

Chicken breeding, thinks grey-haired Christchurch resident Brett Hawker, is “like alcoholism. You just can’t give it up”. He adds darkly: “it is hard on the families”. Sarah Bunton, a teenaged “chook” fancier admits that her lifelong love of poultry once involved dressing the birds up (cue insert photograph of a nonplussed hen swathed in human duds). “I don’t know if they enjoyed it,” she admits, “but they looked cute”. As Brian Glassey squelches around his coops, the aging, toothless bantam-breeding champ looks down at the ground and announces, “here’s a little bugger that’s died! That’s no use, is it?” He cheerily lifts a limp ex-chick and shrugs. “That’s life in the fast lane…”

A delve into a niche interest and those who feel defined by it.

You’d be forgiven for thinking that Brett, Sarah and Brian were stranger-than-life characters in a Christopher Guest mockumentary (played by Ed Begley, Jr., Parker Posey and Guest himself respectively). But director Slavko Martinov’s film is a proper, for-real doc — albeit one that comes with a light sprinkling of mock. Not that Martinov’s cruel to his subjects; they’re on the whole a likeable bunch, quaintly eccentric and for the most part not unaware that their parochial, subcultural obsession is a little bit odd. So Martinov (whose last film, incongruously, was about North Korean propaganda) keeps the tone jaunty and bright. Meaning he feels obliged to cram in just about every bird-pun conceivable via eye-rolling chapter headings like “A Fowl Wind Blows” and “Who’s Got The Eggs Factor?”. Hoary puns aside, this is fine when he’s dealing with the actual exhibition element — the tone chimes well with the giddy thrill the contestants experience as the big day of the New Zealand National Poultry Show approaches and they diligently groom, pluck, snip, bathe, blow-dry and inspect their Barred Plymouth Rocks and Black Orpington Bantams. However, this isn’t just a clucky Best In Show (Breast In Show? No, that’s too rubbish, even for Martinov). The Christchurch Poultry Bantam and Pigeon Club, it’s soon revealed, is suffering a constitutional crisis. During their meetings (in a pokey side-office at a Table Tennis club) we observe a developing schism: between the traditionalists, fronted by rheumy club president Doug Bain, and a vocal clique of modernists who crave “young blood” in the form of amiable, self-effacing fortysomething Mark Lilley. Martinov’s persistent punnery and overuse of upbeat, twangy folksy music suggests he’s inviting us to see this all as a wee bit silly. But at the same time, in a have-his-cake-and-eat-it gambit, he’s using this small-scale power struggle to try and rev up the film’s dramatic engine.

It doesn’t quite work. In fact, it’s Pecking Order’s least interesting aspect, meaning we spend more time watching these passionate chook-heads stifling yawns in a beige-walled room than we do observing them with their (genuinely impressive) animals and learning about their poultry-preening craft. Besides, Martinov never makes clear what the dissolution of the club would actually mean, at least in the context of the big show. How much difference would it make to all these Christchurch-based competitors? There is a quiet, gentle micro-tragedy to Doug Bain’s fall from grace, but it would have been good to see more of Sarah Bunton’s journey, or more closely follow Mark’s pre-teen son Rhys, who is an apparent bantam-breeding prodigy. For all the interesting characters and vibrant-feathered birds featured here, Pecking Order feels a little too lacking in colour.