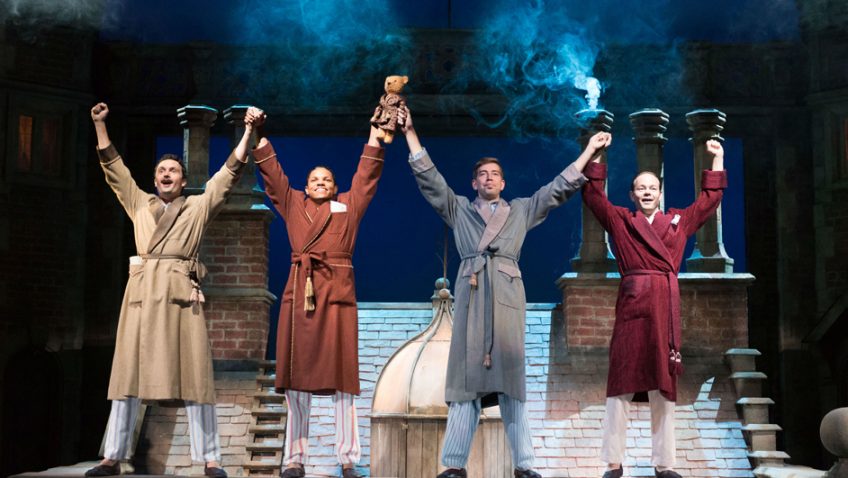 Robert Tanitch reviews Love’s Labour’s Lost and Much Ado About Nothing at Theatre Royal, Haymarket, London

There is nothing original about setting Shakespeare’s Love’s Labour’s Lost in the Edwardian era. It has been done many times before. Christopher Luscombe’s originality is to stage it as a double bill with Shakespeare’s Much Ado About Nothing and set Much Ado in 1918. Many academics think that Much Ado About Nothing may once have been called Love’s Labour’s Won.

Designer Simon Higlett was inspired by Charlecote Park near Stratford-upon-Avon (where Shakespeare was caught poaching) and his handsome set is perfect for the Haymarket stage.

The two plays are quite separate with different characters, but they benefit from being seen together. You can see both on the same day, matinee and evening, if you want.

Love’s Labour’s Lost is an undergraduate play in which Shakespeare ostentatiously shows off as wit, punster and sonneteer. The taffeta phrases, the audacious conceits, the pedantic affectation, the Latin quips and the topical allusions, can have audiences reeling.

The elaborate wordplay and verbal gamesmanship can be difficult and sometimes incomprehensible. The jokes were aimed at a sophisticated elite.

But Christopher Luscombe’s engaging production and the actors’ engaging performances make it seem much easier this time round.

Four young men take a vow of celibacy and swear they will forsake the company of women for three years. No sex for three years! What could be more absurd? Flat treason against the kingly state of youth!

Besides they have forgotten that four young women from abroad are arriving that very day. Needless to say, the vow is broken almost immediately.

One of the most delightful comedy scenes is when the young men, one by one, read out verses, which confess their love for the girls, totally unaware that their mates are eavesdropping. The scene is all the more delightful in this production because it is played out on the roof of the house and the lads are in their pyjamas and dressing gowns.

The lads pretending to be Muscovites have a ball and the Pageant of the Nine worthies has been turned into an operetta.

Tunji Kasim’s Dumaine, taking his cue from Sebastian Flyte in Evelyn Waugh’s Brideshead Revisited, has a teddy bear and gets quite hysterical when it is threatened. Peter McGovern’s Moth, a sweet, acute hall boy, sings beautifully.

I was deeply moved by the final scene. The same cast appear in Much Ado About Nothing. Edward Bennett and Lisa Dillon now play Benedict and Beatrice, two professional misogynists, who pretend they dislike each other when everybody knows they adore each other. The plot is to trick them into confessing their love.

The popularity of the couple’s sparring is such that they have always upstaged the main plot, which concerns a groom accusing his bride of adultery at the altar as they are about to be married.

Nick Haverson’s Constable Dogberry is a twitching neurotic ass in need of medication and a psychiatrist. The scene where he interrogates the prisoners has been extended to include a long stretch of hilarious mime in which his office is so crowded that that nobody can get to the door and make his exit.

Nigel Hess’s music is a definite plus. I strongly recommend you see both plays.