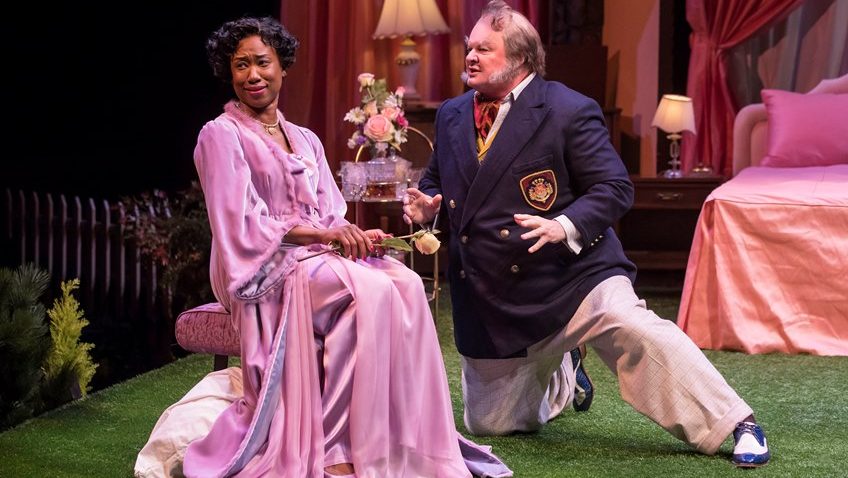 Shakespeare’s The Merry Wives of Windsor, regularly revived, is good for a belly laugh. There is a tradition that Queen Elizabeth wanted to see Sir John Falstaff in love and that Shakespeare, in answer to the royal command, dashed off this farce in a fortnight.

The Falstaff he recreated is not the Falstaff we know from Henry IV Parts 1 and 2. He’s a fat-bellied impostor; the man, famous for his wit and the cause of wit in others, has become a mere scapegoat.

Shakespeare sets the action firmly in his own time (1600). Antonio Cimolino’s jolly production, seen at Festival Theatre, Stratford Ontario, Canada two years ago, is updated to the 1950s.

Falstaff, impecunious, decides to seduce two respectable middle-aged married women, hoping to make some money out of them. The women, furious to receive identical love letters, join forces to teach him a lesson. Humiliated though he is, he keeps coming back for more punishment and is duped, not once, not twice, but three times.

In order to evade a jealous husband, he is forced to hide in a dirty laundry basket and is then thrown unceremoniously into the Thames. Trying to escape the husband for a second time, he disguises himself as an old woman and is beaten black and blue. Finally, he is persuaded to dress up as a stag for a midnight assignation in Windsor Park, where he is frightened out of his wits by children pretending to be fairies.

The bedroom farce with Falstaff crawling all over Mistress Ford’s bed is a lot of fun; even if the idea of actually having sex with this “gross watery pumpkin” is singularly unappealing. At one point, he is stranded like a turtle on his back. It takes six men to lift the laundry basket with him in it.

Geraint Wyn Davies is a much younger Falstaff than usual and far, far removed from the original. Davies looks like he would be good casting for Charles Dickens’s Mr. Pumblechook.

He acts plump Jack for the foolish innocent Shakespeare has turned him into. He is childish, naïve and the comic scenes he shares with Graham Abbey, who plays the irrationally jealous Ford, are very enjoyable.

Ford is very funny when he is frantically emptying the basket of its enormous amount of dirty linen, absolutely convinced Falstaff is under it all, and finding he is not.

Falstaff is not the only one to be made a laughing-stock. There is a whole gallery of people, who are mortified: not least the two foreigners, a Welsh parson and a French doctor, who are forced to fight a duel in a field covered in cow pats with predictable slapstick results.

Bill Alexander, way back in the late 1980s, also set his production for the RSC in the 1950s; and the viciousness of the Windsor population towards Falstaff in the final scene was so very nasty, it took the audience completely by surprise. Cimolino’s crowd-pleasing producton cuts the verbal cruelty completely.