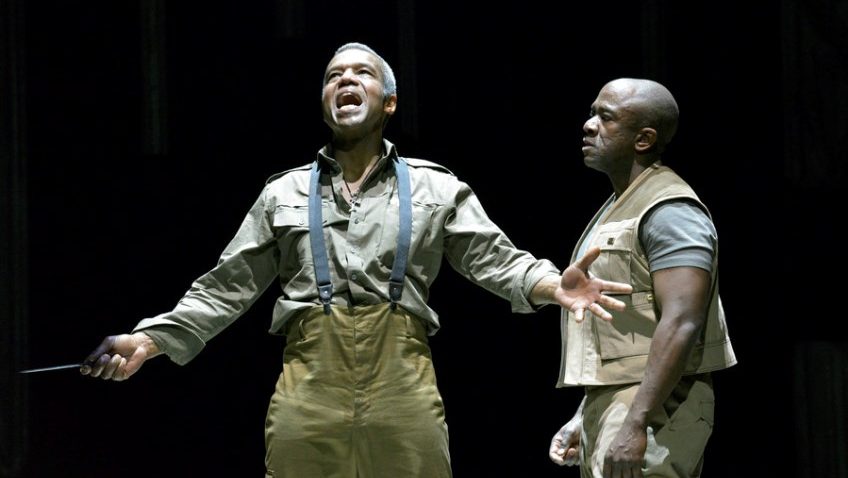 Quarshie’s Othello is understated, subdued, physically and verbally. He has been westernised. He is statesmanlike, not warlike; he has no Moorish grandeur. He doesn’t look the sort of man with a romantic past and able to win a young woman’s love with exotic back stories of his youth.

Quarshie is not the noble warrior Shakespeare created. Here he even allows his soldiers to torture (waterboard) prisoners.

It is not until we get to the great temptation scene in Act 3 Scene 3 and Iago succeeds in convincing Othello that Desdemona is having an affair with Cassio that Shakespeare’s Othello is recognisable. His savage, barbaric fury released, he chains Iago to a chair and tries to strangle him and asphyxiate him with a plastic bag.

Iago has good reason to be angry that Othello appointed Cassio (Jacob Fortune-Lloyd) to be his lieutenant rather than him. Cassio has charm but he’s weak, impetuous, immature, guileless and he can’t hold his drink. He gets promotion only because he is Othello’s best mate.

Joanna Vanderham’s Desdemona is no innocent girl. She is so soigné it is easy to believe she could be having an affair with Cassio.

Lucian Msamati’s Iago is proud of his roots and at the party to celebrate their victory sea battle he sings an African folk song. It is at this party which turns into a brawl that a drunken Cassio, trying to be one of the lads, joins in a rap contest and reveals his racism.

In the 1950s at the Old Vic Richard Burton and John Neville alternated Othello and Iago. As far as I know it hasn’t been done since. It would have been interesting to see Quarshie and Msamati alternate roles.

NB. There are more RSC productions of Shakespeare for free on BBC iPlayer: Macbeth, Hamlet, Romeo and Juliet, Much Ado About Nothing and The Merchant of Venice.