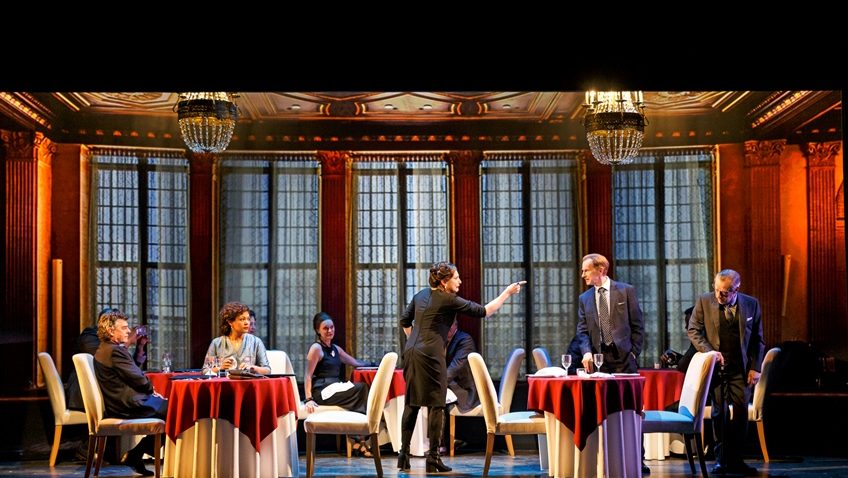 The Stratford Festival in Stratford, Ontario, Canada, founded in 1953, is the largest repertory theatre in North America and produces an international repertoire of classics, modern classics, Canadian writing and musicals. Production values are extremely high.

Shakespeare’s last tragedy and most political play has been never been popular with the general theatregoer. It usually works best at times of national strife when Left and Right find they can use its political arguments for their own ends.

The action is set in 490BC before Rome was great and when she was still fighting the Volscians. Caius Martius wins a great victory at Corioli and is given the name of Coriolanus. It was traditional for the warrior hero to appear before the people in sackcloth and ashes and display his wounds.

Coriolanus, proud and arrogant, has an absolute contempt for the people which, fatally, he does not attempt to disguise. The idea of humbling himself in the market place is anathema to him. A victim of a violent temper, he is incapable of acting mildly.

This production directed and designed by Robert Lepage in 2018 is one of the most enjoyable productions I have seen of the play. Set in modern times and acted by a fine ensemble, it is visually thrilling.

The action here is played out in offices, bars, restaurants, bath houses and broadcasting studios. One scene is played out entirely in texting. The cinematic framing of individual scenes plus the projections give the drama a terrific pace.

The last time Lepage directed Coriolanus (in Montreal in 1993) he played it for comedy. This time he takes it seriously. There is a big aggressive performance from Andre Sills as the war hero, an unsympathetic thug accused of being a traitor.

A major surprise is the way Lepage has directed the scene when Volumnia (Lucy Peacock), Coriolanus’s mother, goes down on her knee and begs her son not to sack Rome. There is a famously long pause, the longest in all Shakespeare, before he replies.

In this production Peacock is so exasperated by his lack of response that she exits and Sills has to say, “O mother, mother what have you done?” as an aside, all on his own. The line’s impact is deliberately diminished.

Aufidius, the Volscian leader (who confesses he would much rather have sex with Coriolanus than with his own wife) is also played as an unsympathetic thug but much older than usual by Graham Abbey.

Stephen Ouimette and Tom Rooney are a good double act as the unscrupulous tribunes who stir things up and there is strong support from Tom McManus (a former Coriolanus) as Menenius Agrippa and Michael Blake as Cominus, the only supporters Coriolanus really has.