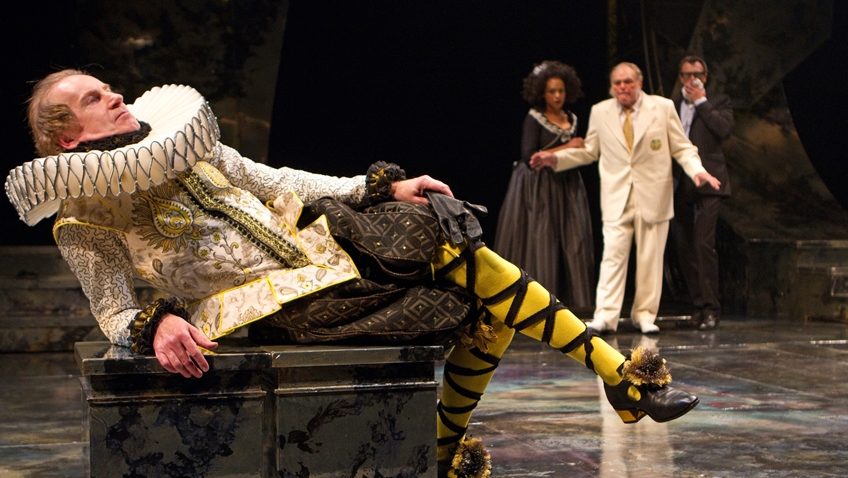 If music be the food of love, play on. The play’s opening line is set to music and repeated again and again throughout Des McAnuff’s production which was seen at the Shakespeare Festival in Stratford, Canada in 2011.

The production is aimed at audiences coming to Shakespeare’s bitter sweet comedy of unrequited love, misplaced affections and mistaken identities for the first time. There’s pop rock music and lots of visual jokes. It misses out on the poetry, the melancholy, the heartache and the sexual ambiguity.

Shipwrecked Viola arrives by boat. Foolish Sir Andrew Aguecheek makes his entrance in a golf buggy to play golf with Sir Toby Belch. The professional clown, Feste is a sort of rock star and Ben Carlson has a live band on stage to accompany him.

Olivia is dressed in Victorian costume in one scene and then in the next she is dressed like a 1920’s flapper. There is such a variety in costume that when Malvolio, Olivia’s steward, gets into full Elizabethan garb, plus rough and cross-gartered yellow stocking, one of theatre’s most famous comic scenes, the joke, the sheer absurdity of a Puritan of all people being dressed like that, is lost.

Brian Dennehy’s Sir Toby and Stephen Ouimette’s Sir Andrew are at their best when they are caterwauling Hold Thy Peace in the early hours of the morning and keeping everybody awake. They are at their worst when they are running around the stage in a ridiculous manner whilst Malvolio is reading a love letter which he presumes comes from the mistress of the house, Olivia (Sara Topham). There is nothing funny about Tom Rooney’s deadly serious Malvolio.

Sir Andrew, having a sauna, very nearly drops his towel to shrieks of girlish delight from the audience. The biggest laugh of the evening is when a pizza is delivered to the revelers on stage.

I am looking forward to watching the productions which The Festival is streaming in the next few weeks. I saw Eugene O’Neill’s Long Day’s Journey Into Night and Timothy Findley’s Elizabeth Rex on stage in Stratford and can strongly recommend them both.

Please note, because of the time difference between Canada and Britain, the time to watch the productions in the UK for free will be on Fridays. If you pay a subscription fee you can have access to The Festival’s huge archive at any time. The timetable for the showings area s follows:-