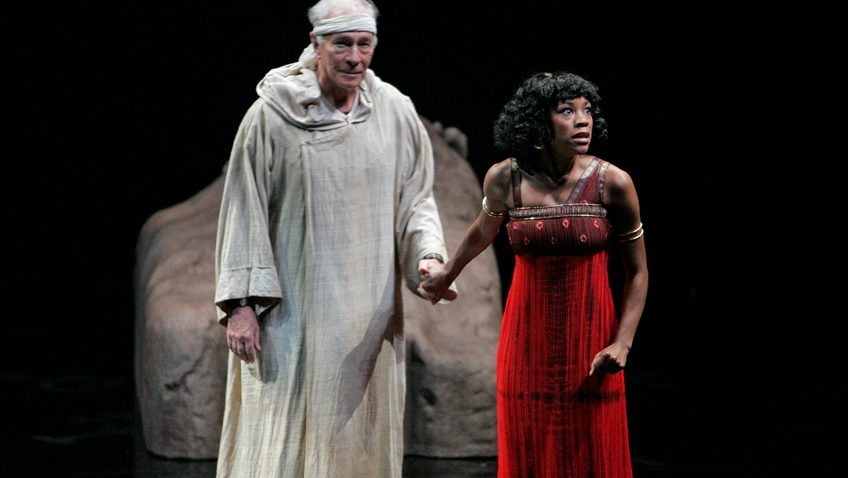 George Bernard Shaw wrote Caesar and Cleopatra in 1898 and modelled it on the then-fashionable pseudo-historical dramas of the day. It was conceived on the grand scale as a spectacular production for the great classical actor-manager Johnston Forbes-Robertson, who eventually played Caesar in New York in 1906 and in London in 1907.

Shaw’s script is deliberately anachronistic so as to underline that “there has been no progress since Caesar’s time” and that “all the savagery, barbarism, dark ages and the rest of it of which we have any record as existing in the past, exists in the present time.”

John Gielgud and Anna Calder Marshall appeared in Chichester in 1971 and Alec Guinness and Geneviève Bujold appeared on television in 1976. Since then, there has been no production in the UK.

The production on line is by Des McAnuff and was seen at The Festival Theatre, Stratford, Ontario in 2008 with Christopher Plummer and Nikki M James in the lead roles

Shaw’s Caesar is a bald, 49-year-old gentleman, famous for his clemency. Shaw’s Cleopatra is a silly little girl, a foolish 16-year-old, infamous for her vindictiveness. Caesar grooms her to be a Queen. Plummer (who was 78 in 2008) has the authority, wisdom and dry humour. James has the vivacity. They work extremely well together. Timothy D Stickley is excellent as Pothinus, who wants to oust Cleopatra and put her weakling brother on the throne, so that he (Pothinus) can have the power.

The two most dramatic events – the burning of the great library in Alexandria and the murder of Pothinus – take place off-stage. Caesar, surprisingly unmoved by the fire, reacts angrily to the murder: ‘To the end of history,’ he says, ‘murder shall breed murder, always in the name of right and honour and peace, until the gods are tired of blood and create a race that can understand.’

The play ends with Caesar promising that when he gets back to Rome, he will send Cleopatra a much younger and physically more active man for her to play with. His name is Mark Antony and he is 30-years-old.

NB. On Thursday December 17 The Festival Theatre, Stratford, Ontario, Canada will be streaming All the Sonnets of Shakespeare. Please note, because of the time differences between Canada and Britain, the time to watch the production in the UK for free will be on Friday. If you pay a subscription fee you can have access to The Festival’s huge archive at any time. You can find out more by clicking here.