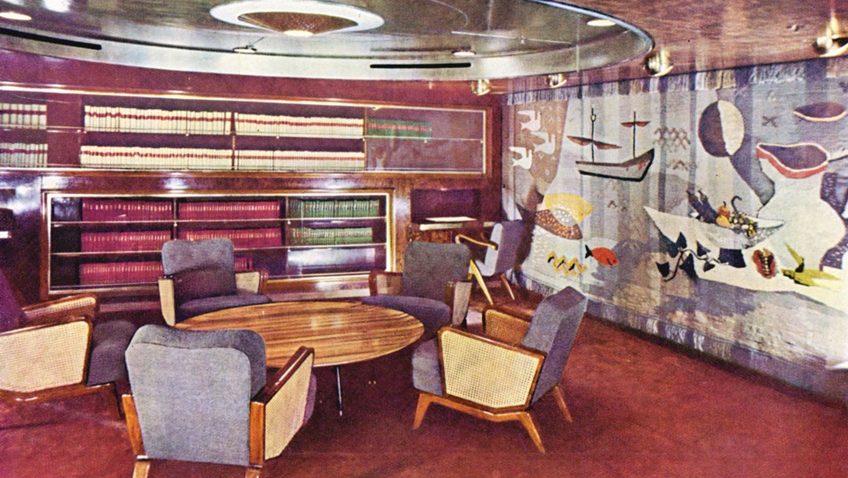 If you prefer your galleries off the beaten track and like niche exhibitions to expand your horizons, catch the new exhibition at the Estorick Collection: Italian Threads. This is not only an informative survey of how the art, textile and home furnishing worlds collaborated in the mid-20th century, but the story of Mario Alberto Ponis, (Florence 1893-Genoa 1970), a pragmatic, adaptable and visionary entrepreneur whose company, MITA, (an acronym in Italian for Italian Artistic Rug Manufacturer) was at the forefront of this collaborative trend for 50 years.

No one could have predicted that Ponis would end up in the middle of a creative explosion where his company not only manufactured, but originated designs for rugs, scarves, cruise liner panels and wall hangings with some of Italy’s leading architects, designers and artists. Ponis’ passion, like the contemporaneous Futurists, was flight and anything mechanical.

By 21, he had his pilot’s licence, and served as an aviator in the First World War. This is a connection which was carried into the Second World War, when his factory supplied life jackets, emergency food bags, thermal helmets, and flight outfits (modelled by Ponis) to the Italian Air Force. Here, you have to be willing to turn a blind eye to Ponis’ support for the Regia Aeronautica Italiana, which backed Franco’s Nationalists in the Spanish Civil War, and fought alongside the Germans in WWII.

When Ponis founded MITA in Genoa in 1926, the focus was on hardware, not “software”. The idea was that Ponis’ custom made machines would produce hand-knitted rugs in the Middle Eastern artisanal tradition faster, and at lower prices, than any other company in Italy to meet the growing demand for affordable household furnishing after the First World War. Ponis had the mechanical innovation, and only needed the threads, the designs, and the clients.

Ponis did not wait long for anything. He had a knack for making contacts, and luck with establishing a network of collaborators, most longstanding. The Futurist Fedele Azari, who shared Ponis’ love of aviation, put him in touch with Fortunato Depero who, seven years earlier, in 1919, with his wife, founded Casa d’Arte Futurista, a studio whose patchwork tapestries appeared in prestigious international exhibitions. Though none of the rugs survive, correspondence and invoices show that Ponis manufactured rugs from Depero’s designs until 1930. Four of Deporo’s designs are featured in the exhibition including his “numbers” rug and an explosive, futuristic red and black abstract design from 1927.

In 1928, Ponis began working with the Genoese architect Mario Labò who was preparing to launch two home furnishing companies: DIANA (Decorations Artistic Industries New Furnishings) and ILCA (Ligurian Artistic Ceramics Company). The relationship between the two entrepreneurs was strained and short lived, in part because DIANA and MITA were in competition with one another when MITA began producing its own trademark creations. Nonetheless it was fruitful while it lasted and fundamental to MITA’s future for three reasons.

Through Labò, Ponis came into contact with Paolo Rodocanachi, The Saccorotti brothers, Emanuele Rambaldi, the sculptor Arturo Martini, and other artists whose work you can see in the exhibition. Labò also convinced Ponis that he could vertically integrate MITA by producing his own brand of rugs, although this was to be the cause of their acrimonious split in 1930. Equally important, through Labò, Ponis met Gio Ponti, the founding editor of Domus, who, in 1931, was the first to write a substantive article on MITA, illustrated with rugs designed by Ponti himself, Paolo Buffa and Emilio Lancia. Ponti was to be a lifelong supporter of MITA, whose products were conspicuously promoted in Domus, the influential magazine “for Architecture, Design and Art Lovers”, which is still published today.

In the post war period orders for tapestries and knotted-wool rugs declined. Ponis, now in a modernist factory designed in 1940s by Luigi Carlo Daneri, expanded its range to upholstery, printed fabrics, scarves and artists’ panels as well as tapestries for the booming cruise ship industry. The exhibition covers the 1950s and 1960s with a new range of artistic collaborators, including Enrico Paulucci, (“Mooring”, fabric sample, 1950; ‘Trees, 1952); Giocondo Faggioni, Emanuele Luzzati (rug design for the X Triennale, Milan, 1954) and Emilio Scanavino, who designed decorative panels and a variety of fabrics for MITA.

It is interesting to notice how many patterns correspond with historic trends and influences, for example, Arturo Martini’s “Acrobats” rug from 1929 resembles the many depictions of acrobats by Picasso from that period. Luzzati’s “Moscow” design from 1958 reflects the reaction to Fascism in Italy when, after WWII, the Italian Communist Party was the largest in the West. Marco Biassoni’s Clown design for scarves from 1959 resembles the colourful Murano glass clowns of the 1950s.

The two-room exhibition offers a variety of designs and products from the 1920s until just after Ponis’ death in 1970. As is the case with fashion exhibitions at the V & A, fabrics date, and they never look as good on a manikin or in an isolated display as they did “in the flesh”. Paulucci’s “Boats” tapestry still has appealing, calming beauty, but despite the rich wool fabric, Gio Ponti’s 1935 “Chairs” rug is less impressive than it might have been in a 1930s flat or villa. The photographs of the tapestries and upholstery in the cruise liners testify to how they fabulous they would have appeared to passengers. Sadly the Andrea Doria, which featured a beautiful MITA tapestry by Michael Rachlis in the first-class reading room, sank in 1956 after only three years on the high seas.

The architect Mario Tedeschi used MITA fabrics in a house he designed in the seaside resort of Santa Margherita, and Faggioni’s fabric designs entitled “Foglie” (Leaves) was used for the curtains of the Barracuda, a nightclub in the same resort. You can see the latter fabric samples from 1953 in the exhibition. Giorgio Host Ivessich, a prolific pupil of Gio Ponti, used MITA produced fabrics in his interiors, including his own (his “Hieroglyphic” fabric sample, 1952 is on display). If the exhibition encourages you to seek out MITA textiles in situ, you can still stay at the Parco di Principi in Sorrento, a hotel designed by Gio Ponti with breath-taking views of the Bay of Naples.