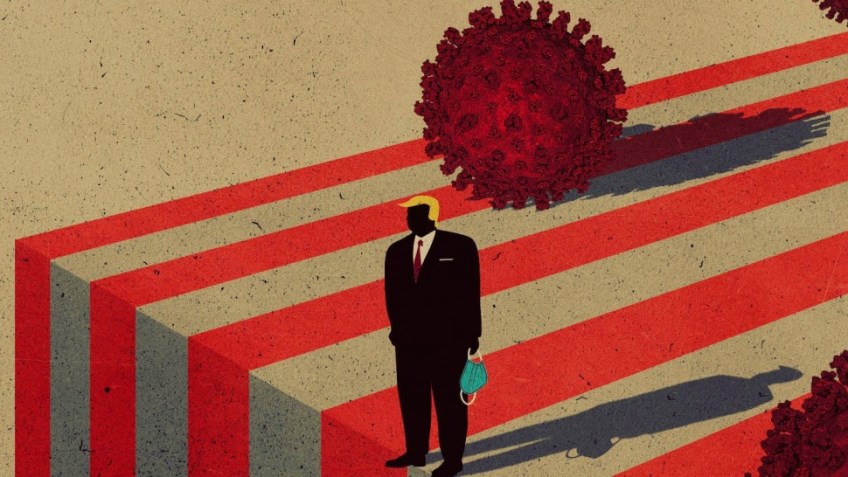 How do you make a film about the Covid-19 pandemic that includes testimonies from all over the world when you are supposed to be social distancing, not flying or travelling, and not gathering in groups? This is a film that, by definition, has been made in the past eight months, since it ends with a last-minute insertion of the announcement that the President had succumbed to the virus. The logistics were not enough to stop Alex Gibney (Client 9: The Rise and Fall of Eliot Spitzer; We Steal Secrets: The Story of Wikileaks, Enron: the Smartest Guys in the Room) who clearly likes a new challenge, as evidenced by his last film, Citizen K, an in-depth portrait of the exiled Russian oligarch Mikhail Khodorkovsky and his battle with Vladimir Putin.

For Totally Under Control, Gibney worked with two co-directors, Ophelia Harutyunyan and Suzanne Hillinger, but the same obsession with detail, meticulous research, and thoroughness that characterise his other films are found in this whirlwind survey of how the pandemic spiralled totally out of control in the USA. The title is, of course, inspired by the US President’s reassurances that “everything is under control” as seven million Americans became ill, 30 million lost their jobs and 200,000 (and climbing) have lost their lives.

Gibney’s intelligent and articulate contributors, who were interviewed remotely, include Dr Eva Lee, famed for her prescient, pandemic-inspired mathematical models that were ignored, and Caroline Chen, from Hong Kong, and Victoria Kim, the LA Times’ Seoul correspondent. They are here for a comparison of the measures taken by those cities to contain, with much more success, the epidemic.

Using virtual cameras, Gibney records a variety of key interviews, as much to have a record for posterity, as for the purposes of what he could fit into a two-hour, pre-election film. While no serving member of Trump’s government agreed to participate, he has gathered an impressive number of “players”, government officials, scientists, doctors and whistle-blowers, and even Dr Vladimir Zelenko.

Zelenko is the Rasputin-like New York doctor behind the craze for hydroxychloroquine laced with zin and Zithromax antibiotic as a cure. Zelenko, who finds the whole thing amusing, despite warnings of harmful side effects and no proof that it does any good, appears in a YouTube video, addressed directly to United States President Donald Trump, claiming “tremendous results”. Despite the harmful side effects, lack of testing and the only evidence that it works being Dr Zelenko’s unverified claim, the President was an instant convert – and tweet supporter.

Admirably comprehensive, Gibney tackles everything from The Health and Human Services’ Dr Robert Kadlek’s, ‘I don’t see a sense of urgency’ to Red Dawn emails reminding the world of the ‘wear a mask or go to jail’ advertisement of the 1918 epidemic – from which the Trump regime learned nothing – that killed between 20-50 million – to a disgraceful bidding war on PEE in which private companies, states and then the Federal Government were competing against one another, driving up prices.

At times, the aim of throwing all the damning evidence at the viewer is overwhelming and, following the musical chairs of talking heads (sometimes, their names and positions are helpfully repeated) takes the utmost of concentration.

The fraught and publicly exposed relationship between Trump and Dr Anthony Fauci, Director of the National Institute of Allergy and Infectious Diseases (NIAID) since 1984, will be well known and Gibney does not dwell on him. We hear Fauci strongly advise against people taking cruises while Vice President Pence tells the press, ‘we are going to work with the cruise industry’, and Trump’s pet advisor Dr Redfield, the Director of the CDC, telling people they should ‘enjoy Disneyland’. Any film, however on the spread of Covid-19 in the USA has to include shots of Dr Fauci being contradicted and humiliated by the President, who perhaps feared that Fauci was becoming that voice of reason and authority the nation needed so desperately.

A large segment is devoted to the delay in testing, a combination of new discoveries by scientists still unfamiliar with this new virus, manufacturing errors, and, most notably, bureaucracy. To simplify a very technical matter, The Centers for Disease Control and Prevention (CDC) designed a test that targeted three independent regions of the SARS-CoV-2 gene (N1, N2, N3), and a human ribonuclease P gene.

Time consuming and laborious, four reactions, one for each gene, were required for each specimen tested. This test received Emergency Use Authorization (EUA) from the Food and Drug Administration (FDA) on February 4, 2020, but with the limitation that it could be used only at the CDC. Given the limited test capacity, the CDC restricted the test to symptomatic patients with positive travel history or epidemiologic contacts in short, (persons under investigation or PUI) and this limited specimen continued even after the disease was spreading into the non-travelling population, and even after other labs were permitted to carry out the tests. When scientists realised that testing the N3 gene was hampering the result due to its cross-reactivity with other coronaviruses, the complex regulatory framework was slow to allow the approved test to change.

In a February 25, press conference Nancy Messonnier, Director of the National Center for Immunization and Respiratory Disease at the CDC, made the big mistake of warning that the virus would spread and that the ‘disruption to everyday life might be severe’. She kept her job but was subtly replaced at briefings by Deborah Birx, whose religious, political and “scientific” views were more in line with those of Mr Pence.

Among the whistle blowers hardest hurt is Dr Rick Arthur Bright, the highly respected Director of the Biomedical Advanced Research and Development Authority (BARDA) from 2016 to 2020. After the Trump administration ignored his early warnings about the COVID-19 pandemic and illegally retaliated against him by ousting him from his role and demoting him, in May 2020, he filed a whistle blower complaint (Bright has recently resigned from the government). He appears toward the end of the film with tears in his eyes, an unblemished career ruined for speaking truth to power.

Along with The Trump Show, currently showing on the BBC, Gibney’s more focused documentary provides a damning record, and frightening warning about what happens when a US president becomes a Supreme Leader who is allowed to get away with anything.