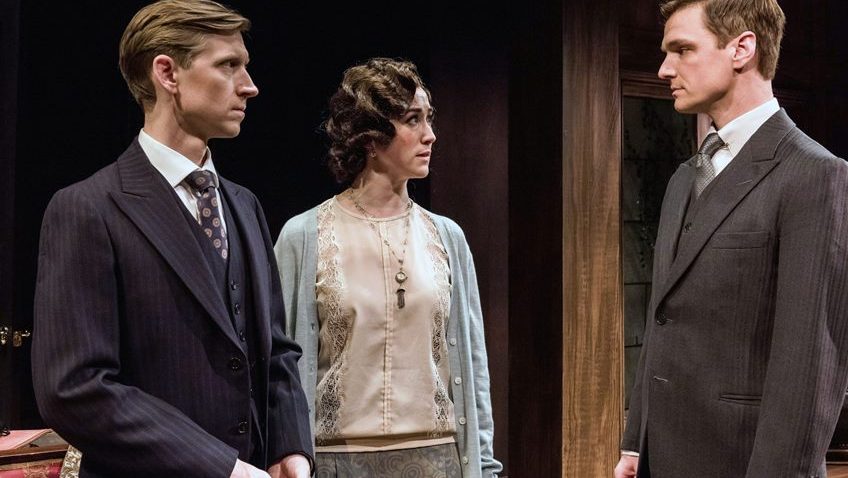 Miles Malleson (1888-1969) is probably best known to cinemagoers as a character actor in cameo roles in British films. His most memorable performances were in Ealing Comedy’s Kind Hearts and Coronets and in the film version of Oscar Wilde’s The Importance of Being Earnest.

In the first he played a hangman who wrote poetry and, in the Wilde, he played Dr Chasuble, a definitive performance, opposite Margaret Rutherford’s Miss Prism

As well as being an actor Malleson was also a playwright, screenwriter, translator, director and producer. In 1950 he translated Moliere’s The Miser and played the leading role.

Conflict was staged in 1925 and wasn’t seen again until 2018 when it was rediscovered by Mint Theatre in New York, which has made its reputation by reviving plays which have been forgotten and neglected.

Conflict is a mixture of debate and sermon plus a critique of politics, sex and society in the 1920s. Following World War I, the nation is struggling to make a living and the rich, always loyal to their class, are doing very nicely, thank you.

Lady Dare Bellington (Jessie Shelton) is having an affair with Major Sir Ronald Clive (Henry Clarke) who is standing for parliament as a Conservative in the local election. His dad (Graeme Malcolm) is a millionaire, a staunch Tory. And very much old school.

Into their lives comes Tom Smith (Jeremy Beck), a young man, who was gassed during the war and has since lost both his parents, his home and all his money. Homeless and starving, he has come to Clive to beg for some money. They knew each other when they were undergraduates at Cambridge.

Dare, who has never taken an interest in politics, suddenly becomes interested when she learns Smith is standing as the Labour candidate against Clive.

Malleson, a socialist, was actively involved in the Independent Labour Party, so it is easy to guess whose side he is on. The play also has something to say about sex outside of marriage.

Conflict, gentle and simplistic, goes for a light and unconvincing happy ending and is careful not to offend a 1925 West End audience, who, like Clive in the play, would probably much prefer to be seeing a revue or a musical like No, No Nanette and not to have to think about social injustices

The characters are all spokespersons and none the worse for that. The actors in Jenn Thompson’s production are very watchable and their English accents are impeccable.