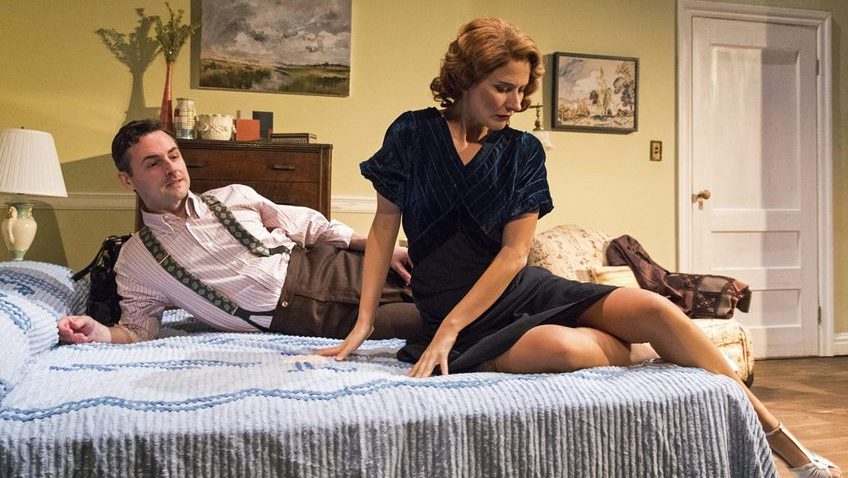 Mint Theatre Company in New York, under the artistic direction of Jonathan Bank, specialises in reviving plays from the past which have been lost or forgotten. Production values are high and, if I lived in New York, I would certainly be a regular theatregoer.

Yours Unfaithfully is the second play of Miles Malleson they have discovered. The first was Conflict which I reviewed last year.

Miles Malleson (1888-1969) was an actor, playwright, screenwriter, translator, director and producer. He is probably best known to cinemagoers as a character actor in cameo roles in numerous British films; and most notably as the poetry-loving hangman in Kind Hearts and Coronets and Canon Chasuble in Oscar Wilde’s The Importance of Being Earnest.

Malleson published Yours Unfaithfully in 1933 but the play remained unperformed until Mint Theatre staged it in 2019.

In 1927 Malleson had written The Fanatics in which he had argued that couples intending to get married should live together first to find out if they are compatible. Many critics in the 1920s did not think the stage was the place for a frank discussion on sex and marriage and one dismissed the play as “poisonous rubbish.”

Six years later, here is Malleson in Yours Unfaithfully justifying and defending open marriages and arguing that an extra marital fling can save a marriage from dying of boredom. Malleson had lots of affairs in his lifetime and three marriages. He writes in a gentle, easy chatty manner.

A seemingly eminently compatible English middle-class couple with two children have been married eight years. The wife (Elisabeth Gray) encourages her novelist husband (Max von Essen) to have an affair, saying she doesn’t mind; only to find that it is not as simple as that and that she does mind and is very jealous. She puts on a brave face. Meanwhile, he declares he has grown to love her all the more since he began the affair and that he no longer has writer’s block.

Malleson, wisely, stops short of a glib happy ending a 1930s theatregoing public might expect and want and leaves things in the air and the audience having to decide for themselves what will happen to the marriage.

Jonathan Bank directs an admirable cast which also includes Todd Cerveris as a wise doctor, Mikaela Izquiewndo as the husband’s lover and Stephen Schnetzer as the husband’s dad who is a priest and has (no surprise) views on morality.