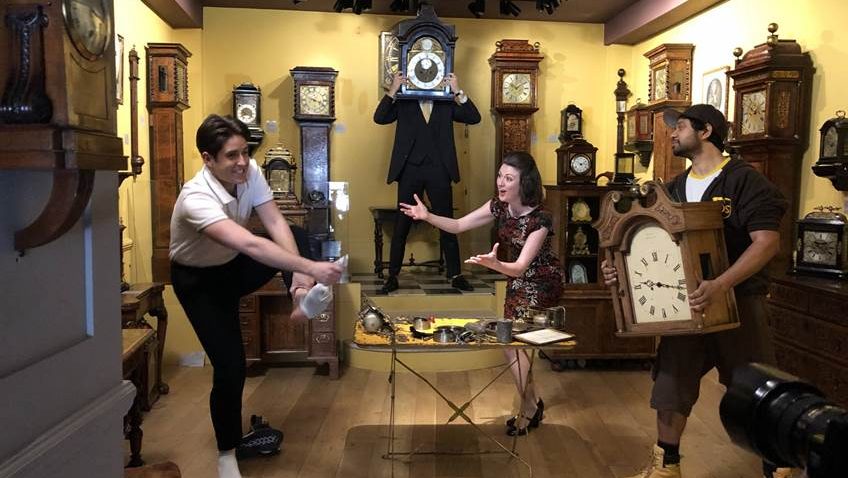 Maurice Ravel’s L’Heure Espagnole (Spanish Time) is a comedy musical in one act sung in French with English subtitles. It lasts 50 minutes.

I thought, since I had never seen a production of Ravel’s lyric fantasy, that it would be a good idea, before watching Stephen Medcalf’s modern update for Grange Park Opera, to watch Frank Corsara’s traditional production for Glyndebourne first.

L’Heure Espagnole premiered in Paris in 1911 when audiences found the subject matter slightly risqué and more suitable for vaudeville theatres than opera houses.

The libretto is by Frank-Nohain and based on his 1904 play. The farce is set in Toledo in the 18th century. The bored wife of a clockmaker looks forward to having sex whilst her husband is out of the shop checking municipal clocks.

She is courted by two men: a young poet who is more interested in poetry than sex and an elderly financier. Both men end up hiding inside grandfather clocks whilst she has it off with a local mule-driver. Mules are well-known for their big muscles

Lovers hiding under beds, behind the curtain and in cupboards is the norm. A recent survey showed that very few lovers have hidden in grandfather clocks.

Grange Hill shot their production in February. The opera audio was recorded at the Wigmore Hall and the filming took place over four days in Kensington High Street, London, at Howard Walwyn Fine Antique Clocks.

The update works well. The actual shop setting and the wide variety of clocks are very much part of the production’s success. The singers mime to their own soundtrack. Jeffery Lloyd Robert is the clockmaker. Elgan Llyr Thomas is the banker. Ashley Rivers is the young poet. Ross Rambogin is the delivery man. Catherine Backhouse is the sexually frustrated wife and she often addresses the camera directly.

Remy Corazza is the cuckolded watchmaker. Anna Steiger is his brittle wife. Thierry Dran is the immature poet. Francois Loup is the aged financier. Francois Le Roux is the naïve mule-driver who has biceps but no conversation.