Home / LIFESTYLE / REVIEWS > / FILM REVIEWS / Orlando Bloom astonishes in a topical British feature debut that does not do him justice. 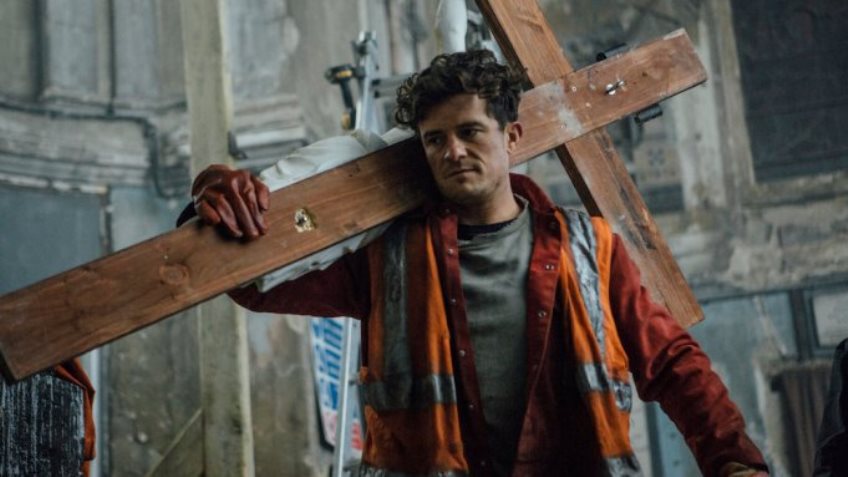 Orlando Bloom astonishes in a topical British feature debut that does not do him justice.

It is not unusual for handsome, young actors who play romantic leads in big budget films to hit forty and realise that they have not future proofed their career, nor shown the full extent of their acting range. Seldom, however, has the transformation been more extreme than in Retaliation, a low budget, topical issue film starring Orlando Bloom. The romantic hero in four of the Pirates of the Caribbean blockbusters, and the angel faced elf with the long, straight, ash blond hair in the Lord of the Rings blockbusters, has metamorphosed into an angry, rudderless, self-harming, middle-aged demolition worker who lives with his mother (Anne Reid) and a disturbing secret in a film from British first-time feature directors, Ludwig and Paul Shammasian.

It is Malcolm to his religious, elderly mother (Reid) who finds ways to remind her son that he is a major disappointment; and Malky, to his exasperated, waitress girlfriend, Emma (Janet Montgomery) and to his few friends, most of whom are connected to his current job. For everyone, it is hard to read Malky, who is part of a team tearing down the old church where he was molested by a priest when he was twelve.

Malcolm does everything for his elderly mother, with whom he lives, but she knows nothing about him – not even that he took the rap for assault to spare his garrulous, face-stuffing best friend Joe (Alex Ferns) – and shows no interest in figuring out her volatile son. She pores through the family photo albums making comments, ‘everyone mistook you for a girl’ and how well a girl he was close with is doing in her career in South Africa.

Just as Malky’s mother refused to accept the reality of child molestation 30 years ago, so she cannot now imagine that the pent-up hurt, anger and even guilt, are manifesting themselves in his violent and erratic behaviour. The audience, however, can hardly escape the textbook signs and scars that are embodied in Malky.

The directors approach every shot with the anger that is eating away at Malcolm when he reads in a newspaper that the priest (James Smillie) who molested him is returning to town. He will be administering at the modern new church built to replace the one Malky is demolishing. This news apparently reignites managed feelings as it seems things were going well enough for Emma to consider that Malky and she were an item. But Geoff Thompson’s script continually shows us how he is pushing her, and others, away, turning the knife in the wound of his defiant victimhood.

When two kids in a supermarket almost run over his mother on a trolley, he smashes one of them into a display stand. ‘That’s not how I brought you up,’ his mother says in the car, as Malky offers her a sweet, hoping they have not ‘fallen out’. Sex with Emma is not lovemaking but a mechanical thrust, which is not surprising when we see the self-inflicted punishment that passes for sex at home.

Then there is the DIY stigmata scene, which is clearly a cry for help as it lands Malky in the hospital. This is an echo to the first scene in which Malky climbs a ladder to take the nails out of the hands of a statue of Jesus Christ, before carefully carrying the statue on its cross down the steps. Cinematographer Felix Wiedemann closes in on Malky, grimacing as he carries the weight of the cross across the Church, a nod to Willem Dafoe in Martin Scorsese’s The Last Temptation of Christ. This feels like the weight of his aggrieved memories and the sin of an unrepentant priest.

That Malky is employed to demolish the church that has ruined his life is not only an obvious metaphor but sets the tone for the film’s blunt treatment of this important issue. Nothing in Geoff Thompson’s script or in Bloom’s astonishingly accomplished performance is inaccurate or unbelievable. The psychology, the reactions of the victim and family and friends and the pain are all there, and real. We are familiar with them from other films on the subject, from Tom McCarthy’s Academy Award winning Spotlight to Francois Ozon’s brilliant, By the Grace of God, both based on true stories of paedophilia in the Church and the coverup. And just last week we had the BBC documentary, Football’s Darkest Secret showing how a football coach’s actions decades earlier still haunts the lives of burly, grown men who can finally weep.

The problem is not so much that Retaliation feels like an attack on the viewer, but that it is dramatising rage and not a story. We have no space to build our own emotional responses to those pre-configured on the screen. Even the nature of the spectacularly dramatic retaliation itself is anticlimactic as the priest is not a real person as are the priests and bishops in Ozon’s film.

There are glimpses of Paul Schrader’s late masterpiece, First Reformed in this story of self-inflicted punishment on a confused Christian man who is angry with the world and frustrated at his own influence in it. But in the Shammasian’s film, there are no mysteries, no revelations, no character development, and, priest aside, the lives of the other characters all revolve around Malky’s but barely impact upon it. While it is difficult to find fault with Bloom’s superb, courageous and nuanced performance, the monotone, heavy-handed film built around it does not do him justice.