Home / LIFESTYLE / REVIEWS > / FILM REVIEWS / We wouldn’t expect a real-life docudrama from François Ozon, but he delivers a masterpiece 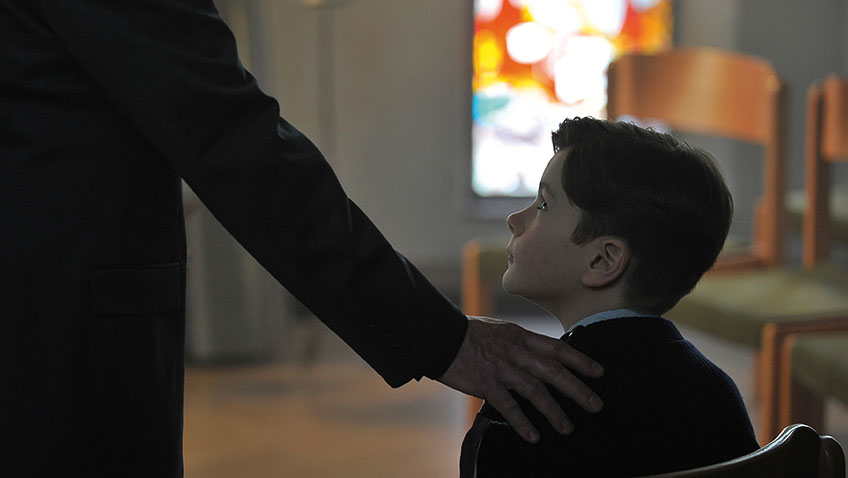 We wouldn’t expect a real-life docudrama from François Ozon, but he delivers a masterpiece

While we have come to expect sharp wit, strong women and unconventional sexual relationships from French writer-director François Ozon (Frantz, The New Girlfriend, Potiche, 8 Women), you don’t expect this: a compassionate, issue-based film with the message that when it comes to healing, Catholic forgiveness is no substitute for secular justice.

By the Grace of God

is a film you might associate with compatriot Robin Campillo (120 BPM and scriptwriter of The Class). But before hearing the story of Father Preynat, whose now adult victims remain marked by the trauma of abuse between 1970 and 1990, Ozon had wanted to make a film about male fragility. As close to a docudrama as fiction can be, and based on real events and people (the names of Church officials are not changed), By the Grace of God

is about an ongoing paedophilia scandal in the diocese of Lyon and about the men who confronted their lifelong demons in order expunge them through justice.

The film is structured like a triptych that allocates roughly the same amount of time to the stories of three very different men but must be seen as a whole to appreciate the full picture. Each man enters the picture, tells his story and then passes the baton to the next before the three come together as activists in the real-life group La Parole Libérée (translated as Lift the Burden of Silence). The acting is superb throughout.

The three men, Alexandre Guérin (Melvil Poupaud), François Debord (Denis Ménochet) and Emmanuel Thomassin (Swann Arlaud) could not be more different in terms of their personalities, current careers, social status, religious belief, family life and visible signs of trauma, but they have one thing in common. All were sexually abused at church-run Scout camps by Bernard Preynat (Bernard Verley) and they want Preynat, and the Church, to be exposed and held to account. 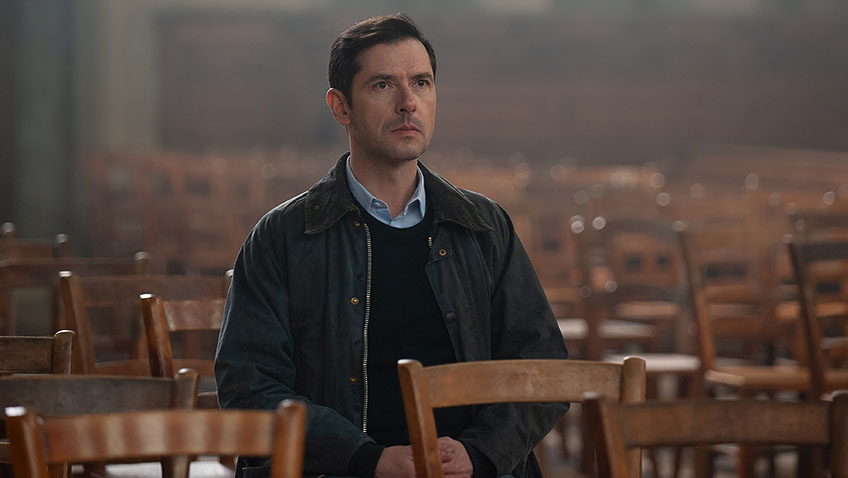 Melvil Poupaud in By the Grace of God

The image of Cardinal Barbarin (François Marthouret) in full Catholic regalia is seen on the balcony of the imposing Basilica of Notre-Dame de Fourvière in Lyon, set, like a fortress, on a cliff top over-looking the city. This brilliant shot establishes not just the setting, but the intimidating power the Church holds over its faithful, and over one of its most fervently obedient sons. It is June 2014, and a tall, handsome and well-dressed man walks to Sunday mass with his family, while a voiceover reads a letter he has just written to Barbarin. Alexandre is a well-to-do, religious, Lyonnais banker, 40, married with five children and he has just discovered that the priest who molested him as a child is alive and still active as a priest. 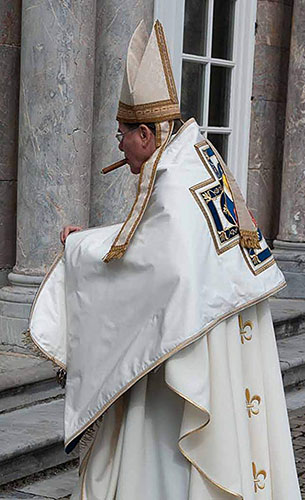 François Marthouret in By the Grace of God

Unlike his two counterparts, Alexandre, who is always calm and measured, believes in working from within the Church to change it and is encouraged when he shares his intimate and horrific story with Régine Maire (Martine Erhel) who, like Cardinal Barbarin (François Marthouret) says the right words and makes the right gestures, but remains complicit. He is further encouraged when Régine Maire tells him she has arranged a meeting with Preynat because Alexandre wants a confession an apology and some answers. To his astonishment, Preynat fully admits his actions, blamed on “mental illness” but does not apologise, later telling the Cardinal that he “forgot to.”

We wince when Maire has everyone stand up, hold hands and recite ‘Notre Père’ as though that’s the end of it. And the camera invites us to note that not a word of this meeting was recorded. The real Régine Maire, now in her 80s, expresses regrets for her silence and admits that the prayer was inappropriate.

At the dinner table Alexandre, at the bequest of his wife, explains to the children what happened to him and says he is doing this ‘so that it stops happening, and so if you see it you will speak out.’ This is Ozon speaking as much as it is Alexandre.

The problem for Alexandre is the statute of limitations, which is 20 years, and so he searches for younger victims. The pace of the film picks up notably when François Debord’s mother, who retained compromising correspondence with the Church when her son bragged about Preynat’s kiss, is contacted by a police inspector who wants François to testify. If Alexandre is deeply religious, urban, well-off and self-composed, François is an atheist, living modestly in the country with his wife, two daughters and a set of drums in the garage on which he vents his rage. At first François is reluctant to dig up the past, but when he and his wife google Preynat, and see – what so incensed Alexandre – that he is still working in the Church with children, he becomes energised by the prospect of finding a positive outlet for his repressed anger and pain. He sets out with a local surgeon (Éric Caravaca) and fellow victim, to organise the victims and go to the press.

The pace, setting, editing and tone of the film change again when Emmanuel Thomassin (Swann Arlaud, who looks like a cross between Eugene Delacroix and Gustave Courbet) reads a newspaper article left on the table of his cramped, modest apartment by his mother Irène (Josiane Balasko). She will later make amends for her quiescence by volunteering to man the group’s hot line when TV coverage and the organisation’s website attract a steady stream of callers. 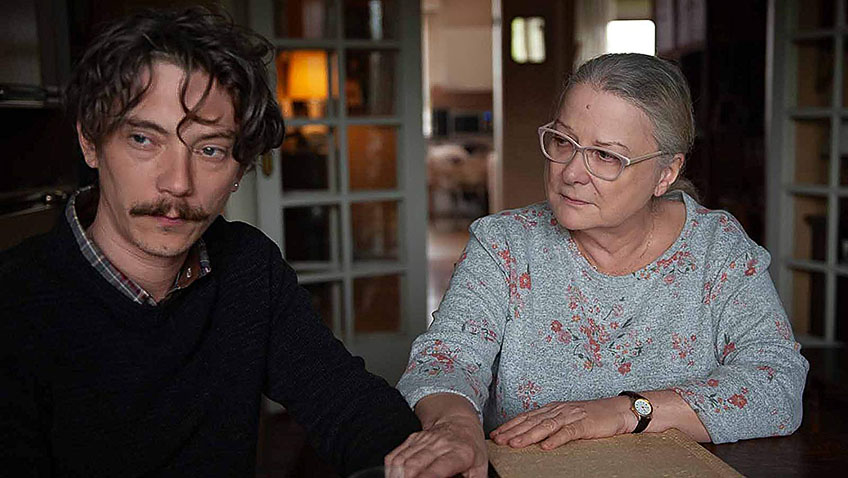 Josiane Balasko and Swann Arlaud in By the Grace of God

Emmanuel is an underachiever despite an IQ that is so high, he finds it hard to adapt. Recently divorced and in a toxic current relationship, he is the most visibly damaged and cannot seem to hold down a job. He takes pills to control his seizures and is obsessed with the scars from Preynat’s abuse, which we see in flashback. These flashbacks, given to all three boys, are sparingly used and judiciously revealing. Visually, they are set apart by their sunny, seaside locations, saturated in bright colours that belie the terror of those camping holidays.

Though he remains unassuming, Emmanuel finds a purpose to his life and a convivial social group through La Parole Libérée. After a shattering interview with Preynat, arguably the finest scene in a film full of them, Emmanuel finds the courage to break with his girlfriend and walk out on his cold-heartened, boorish father.

Ozon, who is a master of building relationships and character through settings and an uncommon attention to detail, focuses more than most directors would on the victims’ families, as abuse affects not just the direct victims. There are revealing scenes with Alexandre’s two sons, who are fobbed off by Cardinal Barbarin when they try to appeal to him on behalf of their father; with the supportive wives and with the various parents who display more mixed reactions. We see how friction arises between the three protagonists and some members of their families whose shame, guilt and denial rise to the surface.