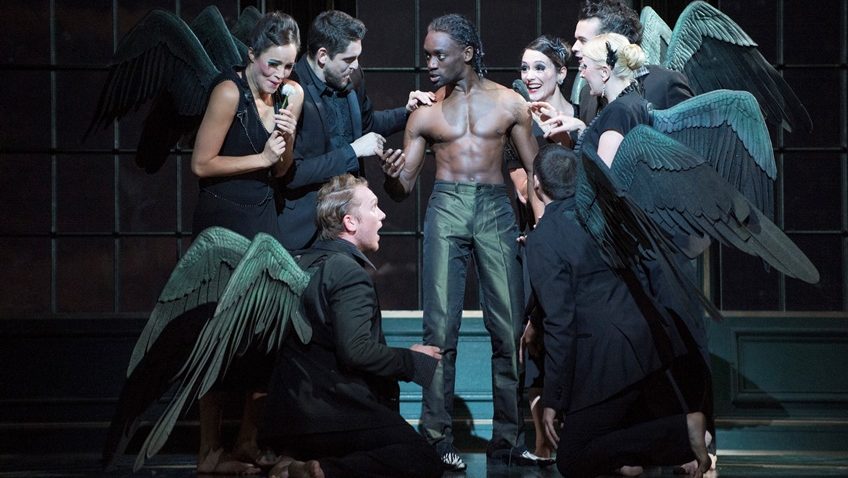 Henry Purcell (1639-1693) wrote one true opera, Dido and Aeneas and a number of semi-operas, including The Fairy Queen, which premiered at the Dorset Theatre, London, in 1692.

The score was lost after Purcell’s early death and not rediscovered until the early 20th century. The extravaganza is both lyrical and vulgar, a jaunty and raunchy romp for sophisticated audiences.

The piece has masques, songs, dances, spoken dialogues and loads of spectacle. The spectacle was so lavish it bankrupted the Dorset Theatre. The cost was a quarter of a million pounds, a lot of money back then.

The cost today means that The Fairy Queen will never be staged again as it was once staged. So we are lucky to have Glyndebourne and director Jonathan Kent and his designer Paul Brown giving us a taster. The production is a collector’s item.

This performance, which dates from 2009 and can be seen on line, is played by the Orchestra of the Age of Enlightenment and conducted by William Christie.

The setting is a palatial living room in a country house in the 17th century. The characters are gods, fairies and mortals, both aristocrats and rustics. The fairies are dressed in black suits and sport raven wings. They undress the lovers who are wearing elegant Restoration clothes, to their underwear. The mechanicals are cleaners in overalls and dust-shoes.

The Sun King rides a chariot in the sky. Titania and Bottom go boating in a pea-cod boat. Diana fondles Lysander. Adam and Eve put in an appearance. Adam wears the most enormous fig leaf. Eve eats an apple and flirts. Bunny rabbits copulate. Mopsa and Corydon are hilariously vulgar.

The text is loosely based on A Midsummer Night’s Dream but Shakespeare has been adapted and re-written, as was the norm in Restoration Theatre. I was surprised by just how much tiresome cod-Shakespeare, poorly acted, we had to sit through before we heard a single note of Purcell.

Purcell’s sweet harmonic sounds and the warbling are beautitful and there is some lovely singing by Lucy Crowe, Ed Lyon and Carolyn Sampson.

I wish Desmond Barrit had at least been given a decent donkey’s head. The actors who come out best are Joseph Millson as Oberon, Sally Dexter as Titania.and Jotham Annan as Puck.